Ukrainians in New Zealand are very concerned about the escalation of tension between their home country and Russia, and want the New Zealand government to do more to help. 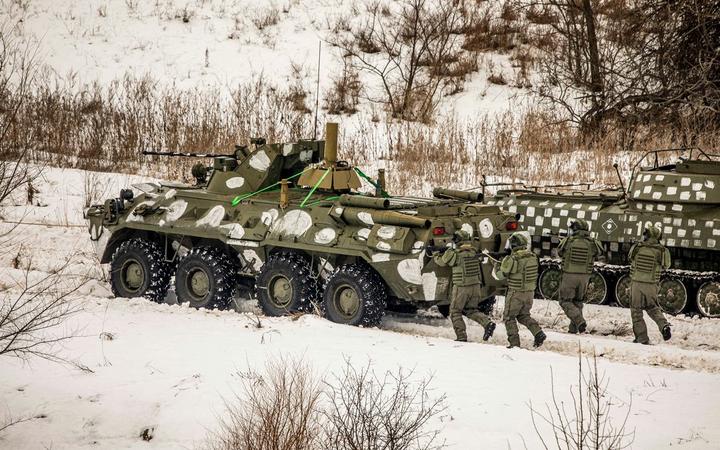 Tactical training with the engineers of the Guard of the Red-Snow of Russia's Armed Forces in Voronezh region, east of Ukraine border on 21 January 2022. Photo: Russian Ministry of Defence / EyePress via AFP

Tensions continue to rise and more than 8000 US troops have been put on high alert for deployment.

Russia has amassed 100,000 troops nearby, but continues to deny planning military action against Ukraine.

Ukrainian Association of New Zealand (North) head Yuriy Gladun said what was happening in his home country was a dangerous and weird situation that should not be happening in the 21st century.

"We should not scare each other, I mean the countries, especially neighbouring countries, with aggression and with weapons and with political pressure. We have to live as neighbours."

Gladun said Ukrainians here were concerned about the people and their country.

"We're worried for people obviously because everybody left somebody behind - friends, family, parents - very often because people who came to New Zealand are predominantly quite young."

With 100,000 Russian troops now on the border of Ukraine, Western powers are uniting.

The Pentagon says 8500 troops are ready to be deployed and Nato is also putting forces on standby.

Nato secretary general Jens Stoltenberg said the deployments are in line with international commitments and they reinforce European security.

"At the same time Nato remains ready to continue dialogue with Russia," he said.

Denmark, Spain, France, and the Netherlands are either considering, or have already decided to send fighter jets and warships to bolster defences in the Eastern region.

Back in New Zealand, Yuriy Gladun said independence is extremely important to his home country and New Zealand should join the international force to prevent a war.

He said the government should deliver a clear message on who they will support and apply sanctions if needed.

"I also wish as a citizen and resident of New Zealand that New Zealand government would do more to join that international voice and to put political pressure on Russia but unfortunately I do not see it."

Director of Toda Peace Institute in Japan, Professor Kevin Clements, who is based in Dunedin, said he hoped diplomacy would prevail to avoid escalation.

"It'll be very messy, it'll be a war which will have very negative consequences for Ukraine and for Russia and it will further polarise the East-West divide."

Clements said if there as a war, New Zealand would not be involved militarily.

"We may be asked to supply and assist on the intelligence front, there are other ways in which we fulfil our normal alliance obligations."

Waikato University law professor Alexander Gillespie said the tension was high and escalating but a war was unlikely.

"It's unlikely that anything would happen over the time of the Winter Olympics because normally events like this tend to wait and so we've probably got a couple of weeks now where there's going to be some very high level diplomacy.

"You hopefully will see a one-on-one meeting between [Russian President Vladimir] Putin and [US President Joe] Biden and that might calm some of the problems that we've got going on."

Prime Minister Jacinda Ardern has shared concerns with the EU about ongoing tensions between Russia and Ukraine.

She said there was a need to reinforce the sovereignty of Ukraine.

She told the President of the EU Council last night that the New Zealand Government would be watching closely and take any steps required to keep calling for de-escalation.

While there was no autonomous sanctions regime, Ardern said the government had other measures it would use if it saw any activity in breach of Ukraine's sovereignty.

Foreign Affairs Minister Nanaia Mahuta hoped ongoing discussions between the US, Russia and other partners would bring about an urgent de-escalation of the situation.

She also called on Russia to act in a manner consistent with international law and to take immediate steps to reduce tensions and the risk of a severe miscalculation.