It's decision day for Auckland, with a possibility the city moves to orange traffic light settings, as case numbers fall and vaccination rates rise. 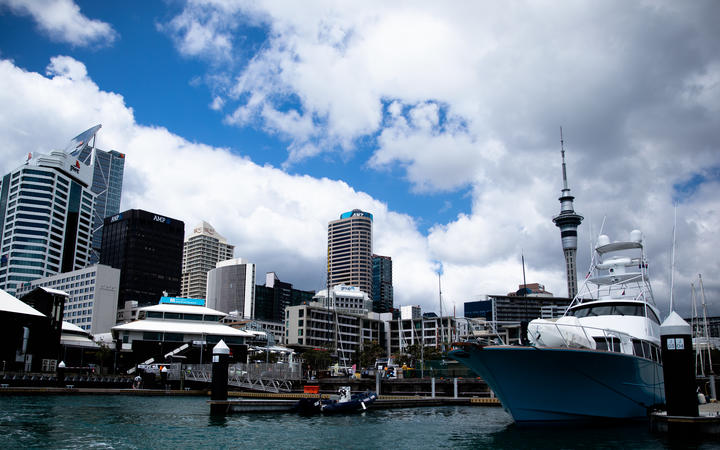 On the day the government decided each region's traffic light setting two weeks ago, there were 182 cases and 93 people in hospital.

The rolling seven-day average of community cases is now half that at 92 a day, and yesterday 31 fewer people were in hospital than a fortnight ago. There have been three deaths in this period announced by the Ministry of Health.

Despite all that progress, Aucklanders RNZ spoke to are mixed in their views about whether the city should stay in red or move to orange.

"Yeah, it's a pretty good idea to move into orange. People want to get back to normal as fast as possible," liquor store worker Uday said.

"Not for now. The cases are still high," chef Tom said.

"You've always got to have health before wanting to flood the gates with people," restaurant front of house Kit said.

"We fit into orange, and we pretty much fit into green," Jeremy said, having a drink at a bar. "So I don't see the reason why we can't go to orange."

"I wouldn't want to be the prime minister. I think she's got a very hard job, and regardless someone's going to have something to complain about," Janet said.

An orange light setting would be a godsend for Sam, who works at Eagle Bar on Karangahape Road.

"Love it. Honestly that's what we need because at the moment it's a waste of time. Everything is okay, everyone's doing okay," he said.

The bar has been operating fine under the red setting, Sam said, but people have to sit down and can't mingle, which is a bit dull for a bar.

"We're dying in some ways, because we can't provide the actual service people are wanting: fun."

Sitting outside having a drink, Fabio said he was planning on going to a festival which wouldn't happen under the red setting. He was hoping Aucklanders would be rewarded before the end of the year.

"We had a very rough year, so it's more than time to open everything again."

It's a big jump from red to orange; when the vaccine pass is used, gathering limits go from 100 to no limits at all. Packed festivals and concerts could go ahead.

Two restaurants on Karangahape Road say they were doing fine under the red setting. People sit to eat anyway, and they can pretty much hit their regular capacity.

Kit from Bar Celeste said the restaurants he had spoken to were also doing okay, and he wasn't desperate to move to orange.

"I've always had a bigger opinion on keeping everyone pretty healthy, and I think with the current status that... we're doing pretty well."

Tom at Uncle Man's Restaurant is also happy operating under red. Jumping to unlimited capacity concerts would be too risky with the number of cases at the moment, he thought.

"I think there should be a limit, because cases are still high in my opinion."

The government's general framework descriptors might give some clues.

At red, the system is facing an "unsustainable number of hospitalisations", with "action needed to protect at-risk groups".

At orange, there is "community transmission with pressure on the health system", but it is manageable.

The government has already ruled out green for any region at this review, which is described as cases of Covid-19 across New Zealand, limited community transmission and manageable hospitalisations.

One bar customer Jeremy said by the government's own definitions, Auckland should be at orange at the least.

"A lot of the guidelines that the government set out for what each red, orange and green light would be, we fit into orange. In fact we pretty much fit into green. So I don't see the reason why we can't go to orange."

Those settings will remain in place until the next Cabinet review on 17 January.