The government's Covid-19 technical advisory group is considering whether to shorten the time between the second and third dose of the Pfizer vaccine. 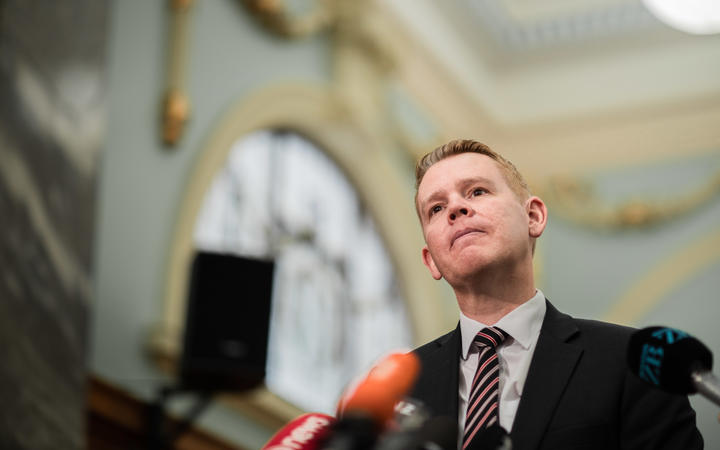 A just released study shows the booster shot provides a similar level of protection against new variant Omicron as two doses against other variants.

Covid-19 Response Minister Chris Hipkins told Morning Report the group is looking into what to do about Omicron.

He said it was early days and any decisions would be based on the evidence, not made by politicians.

"We want this decision to be made based on really clear research and analysis by our health teams rather than it becoming a political decision," Hipkins said.

Early lab studies have suggested two doses of the Pfizer vaccine might not be enough for your body to fight off the Omicron variant, but three doses could provide added protection.

"New data which is very preliminary and initial data shows that the first line of defence with two doses of vaccine might be compromised and three doses are needed to restore protection."

Türeci said BioNTech were already developing a Omicron adapted vaccine that would be delivery ready by March 2022 pending regulatory authorisation.

"Remembering this is lab data and not real world data so we should not overread it, we already know that a booster dose significantly increases your protection against the Delta variant so it is really no surprise."

Turner said the question for New Zealand's health authorities is whether the current six month gap between the second dose and a booster dose is the right gap.

She said health officials would be looking 'very hard' into this over the next few weeks.

"This virus clearly spreads, [it] looks like it spreads faster than the Delta so that's one issue about community spread and mild disease.

"The other important issue is are the current vaccines protecting us sufficiently against severe disease, that's what will keep our hospitalisation burden down [and] stop New Zealand people dying."

Turner said with the Omicron variant appearing just weeks ago, new data was arriving all the time to inform health officials on reducing the gap between the second vaccine dose and the booster shot.

Meanwhile, Chris Hipkins said vaccinations for children could start as soon as mid-January - given Medsafe approve the Pfizer vaccine for children.

"At this point, we're still awaiting their confirmation that they've got all the evidence and that they're comfortable approving the paediatric dose and that is a critical factor and we don't want them to unduly rush that."

New government research shows a third of caregivers are hesitant about getting their young children vaccinated.

Meanwhile, figures show just over half of the Māori population would be happy to get their children to be vaccinated.

Hipkins said it was critical the technical advisory group completed thorough analysis of the paediatric vaccine to ensure all parents are confident getting their children vaccinated.

"It needs to be very robust, it needs to be evidence based so I know that Medsafe are doing a very thorough job of reviewing all of the evidence being presented by Pfizer including the international evidence.

"It's really important that we go into this eyes wide open and people know exactly what the evidence is that has been behind our decision to use [the paediatric vaccine] assuming that's where all of the evidence lands up," he said.

He expected a shipment of the Pfizer vaccine would arrive shortly after the approval of the vaccine for children.

Hipkins said with the current level of supply there would be less of a need to prioritise certain areas or populations, as was seen in the adult vaccine rollout.

"That means we won't have to do the prioritisation that we had to with the adult rollout, what that does also mean is that we can target our extra energy ... to lean into those areas where we know it will be harder and it will take longer."

On mini-MIQs, Hipkins said District Health Boards had been planning throughout the year to ensure they were able to safely isolate Covid-19 cases in their communities over summer.

Yesterday, Queenstown mayor Jim Boult raised concerns that just two motel units have been set aside in Queenstown for people who might need help to isolate with Covid despite tens of thousands of Aucklanders about to hit town.

Boult worried there would not be sufficient capacity to isolate people holidaying in town.

"I think there's more capacity than that that they have identified that they could use in the event they need to draw on it," Hipkins said.

He said the ministry did have the capacity to relocate self-isolating travellers to a managed isolation facility if necessary.