The days could be numbered for the Thames-Coromandel District mayor Sandra Goudie chairing meetings in person. 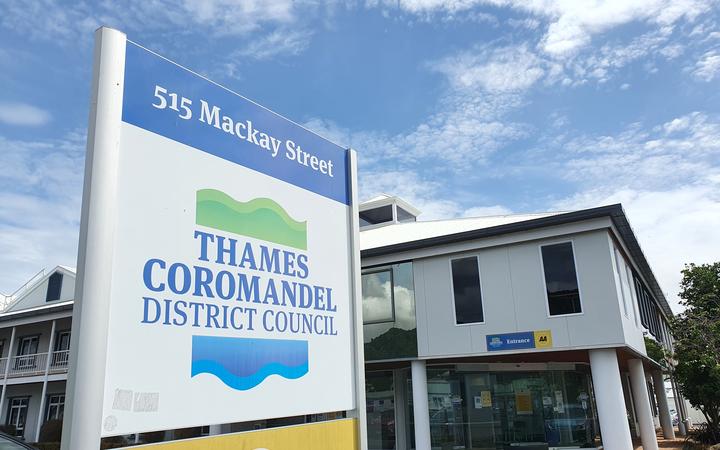 The council is considering a vaccine mandate for staff and elected members in order to work on-site and if it goes for it, Goudie would need to work from home.

Goudie opposes vaccine mandates and has rejected the Pfizer vaccine, saying she will wait for the Novavax jab, which is not yet available in New Zealand.

Councillor Gary Gotlieb filed a code of conduct complaint, after she allegedly spoke at an anti-vaccination meeting in Coromandel.

However, council considered the complaint internally resolved and did not proceed with an investigation.

Today at a routine council meeting, both Goudie and council chief executive Rob Williams dodged questions on the complaint.

Goudie said she was busy and not interested in speaking to RNZ, while Williams said he was also tied up and to write him an email instead.

Thames-Coromandel councillor Robyn Sinclair said the council was consulting with elected members and staff on whether they should be required to show a vaccine pass to enter council facilities.

She said the mayor would have to play by the rules if proof of vaccination was required.

"It's the same as all the other staff, she'd have to work from home."

When asked whether she was surprised that Mayor Goudie turned up in-person to the meeting, she said no.

"It's very hard to chair a meeting when you're not in the same room. She is our mayor, she's chair of all the committees."

Sinclair, who was vaccinated, did not believe the mayor's behaviour reflected badly on the council as a whole, as it was clear it was Goudie's personal view and not that of the whole council.

On the streets of Thames, opinions about the saga were mixed.

Roimata MacGregor was horrified by the mayor's behaviour.

"It's unbelievably outrageous. There's going to need to be changes to rules or legislation around what mayors can and can't get away with. She can't be setting any kind of example like that."

But Elizabeth Savage was among those commending the mayor.

"I think she's brave in making a stand for what she feels is right. It's a personal opinion and more people in her position should make a stand, I think more power to her."

Thames-Coromandel standing orders allow for members to attend by electronic means. The decision is made by the chair of meetings, which is Mayor Sandra Goudie, law expert Professor Andrew Geddis told Checkpoint.

Councillor Gary Gotlieb has filed a code of conduct complaint, after Goudie allegedly spoke at an anti-vaccination meeting in Coromandel.

Geddis told Checkpoint the result of a breach of the code of conduct would most likely be a "stern telling off".

He said no one would want councillors to be able to do more than that though.

"The idea that other councillors could remove a mayor or any other elected official, because they're upset at what they're saying, does run in the face of democracy.

"People did elect her, and whether other elected members, should they be able to get rid of her? That would be problematic, I think."