Immigration advisers have described the first day of the country's new residence scheme as a shambles. 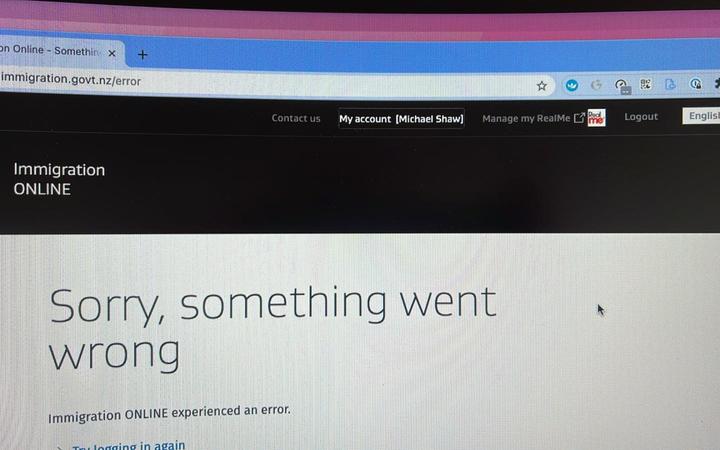 A screenshot of the error message that appeared during one migrant's application. Photo: Screenshot

The first of two phases in the one-off residence visa programme was marred by technical difficulties yesterday.

Immigration New Zealand said IT teams worked through the night and 2000 people have so far been able to apply, out of a predicted total of 15,000.

Immigration lawyer Richard Small said it raised serious capacity and competence issues for the roll-out to a further 95,000 migrants in March. In total, 165,000 new residents are expected to get residence in the next year.

Other online processes were also down affecting applications for temporary visas.

"If INZ can't cope with the comparatively low volumes for phase one, how can we trust promises of timeliness for phase two?" he said. "The impacts of this botch-up are huge - we can't upload documents for any visa type on line, so people can't lodge visas."

Immigration adviser Erin Goodhue tried to submit nine applications for the one-off residence visa, working from 6am to 9pm yesterday and then starting this morning at 5am.

Other migrants worked through the night to apply, she said, but many could not even get into the system and there were long waits for pages to upload.

She said migrants, some waiting for residence for more than two years, were "frustrated, angry, infuriated almost to the point of 'laugh or you'll cry' - just laughing at the absurdity of how completely unprepared INZ seemed to be for yesterday.

"It's incredibly slow - like to the point where it's like 1990s dial-up internet - you press a button and a message comes up saying 'wait a few seconds' before the screen will refresh and that ends up being about 20 minutes before the next screen will come up."

British migrant Mic Shaw, applying with his wife and two children, spent all day at his computer and finally submitted their application late last night. He said he was continually retrying the log-in page, and the outage was also affecting anyone trying to apply for work and visitor visas.

"While we are seeing some improvements in the system, we know some people are still having difficulty, said its general manager Geoff Scott. "We regret the frustration this is causing and apologise to those who have been impacted by this issue.

By midday today, nearly 2000 people had applied and another 3300 were still in the process.

"This equates to more than one third of the total number of applications we are expecting under phase one. The applications that we have received are being allocated and processed and we remain committed to processing them as quickly as possible."