The electricity lines company covering Lake Ōhau is disputing the findings of an investigation into the destructive fire in October last year. 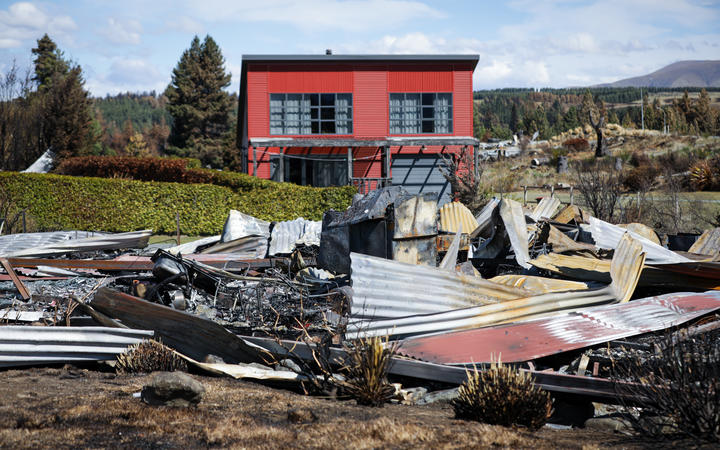 Investigators said that the fire started due to an electrical fault. Photo: RNZ / Nate McKinnon

Fire and Emergency released its report into the fire on Thursday, finding it was accidental and started from an electrical fault.

The investigators concluded that the most likely cause was the failure of a cross arm on a power pole to the north of the village.

Network Waitaki said it strongly believed that was incorrect and it had network data to back up their claims.

"It records down to the millisecond what happens when a power pole or line is affected by an adverse event.

"It is very clear to us that what Fire and Emergency NZ is suggesting, could not have been the cause of the fire."

This was not the only concerns and report inaccuracies Network Waitaki said it raised with Fire and Emergency.

"Fire and Emergency NZ did not seek further feedback from us on this when we pointed this out and have proceeded to release the report largely unchanged."

Network Waitaki said it was vitally important that Fire and Emergency got their findings correct.

"The fire had a devastating effect on the Lake Ōhau community and surrounding area.

"We owe it to this community who lost so much to get this right."

In response to Network Waitaki's claims, Fire and Emergency risk reduction and investigations manager Todd O'Donoghue said they stood by the investigation and its findings.

"It is Fire and Emergency NZ's role to scientifically and independently determine the origin and cause of fires," O'Donoghue said.

"We are confident about our conclusion of the ignition source of the Lake Ōhau fire and the area where it happened."