Analysis: The prime minister all but promises Auckland its freedom and the date is likely to be 1 December, thousands of people march to Parliament protesting against vaccinations, mandates and other grievances but no one listens to them. 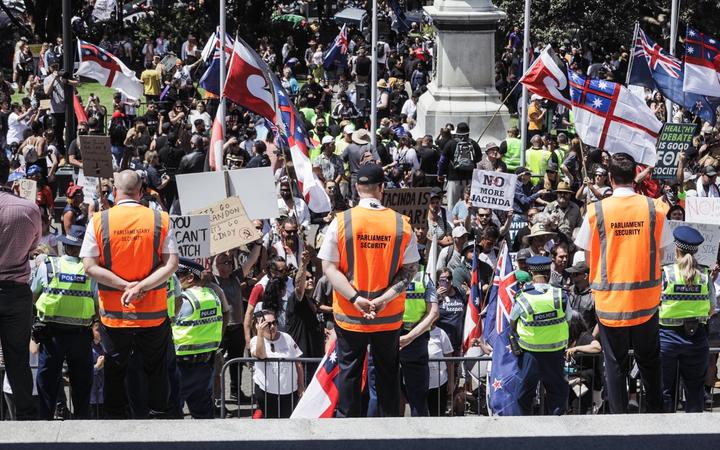 No MPs or ministers were out on Parliament's forecourt to meet protesters earlier this week because all the parties support vaccinations and the mandates. Photo: RNZ / Samuel Rillstone

At Monday's post-cabinet press conference, Prime Minister Jacinda Ardern made the government's intentions very clear - on 29 November she would announce Auckland was moving out of lockdown and into the new traffic light system.

She's likely to say the move will be effective from 11.59pm the next day, 30 November, and Auckland's 'Freedom Day' will be 1 December.

By coincidence, or not, that's the date National set to release Auckland in its own freedom plan.

The difference is that National said it would do it regardless of the vaccination rate and the government wants all three Auckland DHBs to have reached 90 percent double dosed - although that's not going to hold its decision up.

Ardern's quotes show the strength of the government's intentions and how extremely unlikely it is that it will change its mind: "Based on Cabinet's discussion today, there is a strong expectation that Auckland will move into the Covid-19 Protection Framework following this 29 November check-in," she said.

Ardern was questioned on that, about how sure she was that it would happen.

"I can tell you, from Cabinet's discussion today, there is every expectation that at that 29 November (check-in) we will be confirming the move," she replied.

Then she was asked what would happen if one of the city's DHBs, Counties Manukau, didn't make the target.

Ardern as good as said that wouldn't matter. "We are going to be very pragmatic about that decision ... that's a very, very strong nod from us."

Indeed it was. The New Zealand Herald described it as an "unofficial announcement" while RNZ said the prime minister had "all but promised" it was going to happen.

Auckland's DHBs have done well with their vaccination drives, better than nearly all the others. They all hit the 90 percent first dose milestone last weekend and they have time to turn that into double doses.

One of them, Auckland DHB, leads the country with 95 percent first doses and 88 percent second doses. The two other Auckland DHBs aren't far behind: Waitematā's vaccination statistics are 92/84 and Counties Manukau's are 90/81.

When Auckland moves the rest of the country has to wait in Level 2 of the old system. The government wants all the other 17 DHBs to reach 90 percent double dosed - but it could well be pragmatic about that as well and has indicated it won't wait months for laggards to catch up.

It could be that some never hit 90 percent double dosed.

Auckland will move to red in the traffic light system, the stage where lockdown ends but there are strong public health precautions and vaccination passports will severely restrict the freedom of those who don't have them.

The government gave assurances this week that vaccination certificates would be good to go when Auckland comes out of lockdown. On Wednesday Covid-19 Response Minister Chris Hipkins said the system was in its final stage trial.

Holders will have to present them to be scanned when they want to go into events and close-contact businesses, or any business that decides it will only admit vaccinated customers. The staff of businesses that use vaccine passports also have to be vaccinated.

Will they work properly? It would be amazing if there aren't problems to begin with - remember the early issues with the QR codes?

Then there's the actual processing of them. It's going to take time, as Stuff reported: "Festival-goers and audiences for international concerts, sports matches and large stage productions will have to wait longer in slower queues as organisers grapple with processing vaccination certificates en masse," its report said.

Ardern's announcement was the biggest deal of the week but there was another that gained widespread publicity. It was the march to Parliament and the demonstration there by several thousand protesters.

They were angry about vaccination mandates, which cover about 40 percent of the workforce, and a smattering of other things as well.

"There were chants including 'freedom' and 'you serve us' but the protest was largely peaceful," RNZ reported.

"A fence was pushed over and tennis balls with angry messages were thrown at media, security and police as crowds began to disperse."

The prime minister said the protesters did not represent the vast bulk of New Zealanders. No one was going to challenge her on that when 90 percent of the vast bulk have had a first dose of the vaccine and 80 percent are double-dosed.

Stuff's political editor Luke Malpass said there seemed little common cause among the estimated 3000 to 5000 demonstrators.

"They included gang members, hippies, anti-vaxxers, anti-mandaters as well as those worried about losing jobs or who just don't like being told what to do," he said.

"There were New Zealand flags, tino rangatiratanga flags, Trump flags, the Eureka flag (more common in Australia and used by the various unions and white nationalists), even a Russian flag."

Not a single MP came out to hear them.

"Whatever the message was, no-one in power was listening," Malpass said.

"Protests work only when there is a political vehicle or politicians to help apply pressure on the government. No such vehicle or party currently exists."

He said there was little upside for the protesters.

"This was a gesture by those who feel left out and excluded in a world that has fundamentally changed.

"The fact that they think this will work suggests they have fallen deep into the social media echo chamber."

The Herald's Thomas Coughlan asked a question: "When a few thousand people - I'd say 4000-5000 - could summon such passion and bile over a painless and safe method of avoiding an aggressive and deadly virus, one really has to wonder: 'Are we okay? Or have we gone completely mad?' It certainly appears some of us have."

Coughlan also had difficulty describing the motives involved. The protesters could be described as "anti… something, maybe anti… anything," he said.

His conclusion was that the real lesson from the march might be just how hard it was going to be to get the final 10 percent of eligible New Zealanders vaccinated.

There were no MPs or ministers out on Parliament's forecourt because all the parties support vaccinations and the mandates, although National is concerned about how long mandates will be in place.

Party leader Judith Collins said the government should give more clarity around that, even if it wasn't a timeframe.

"We cannot go down this path of having a mandate that lasts forever," she said.

Ardern was reluctant to talk about when they might be lifted, RNZ reported. She said the government wasn't using them nearly as much as some overseas jurisdictions and it was "hard to know" how long they would have to be in force.

* Parliament passed a bill that transfers control of water fluoridation from local councils to the director-general of health. It was introduced by the previous government and the vote was unanimous.

The Director-General of Health, Dr Ashley Bloomfield, said he was very pleased, the change would have a big impact and he would get to work on it.

* Justice Minister Kris Faafoi said he was going to introduce a bill to repeal the "three strikes" law. He expected it would have its first reading next week.

The law was created by the ACT Party and brought in by the previous government. It mandates judges to sentence third-time serious offenders to the maximum sentence for the crime they've committed.

Faafoi said it had not made any difference to the violent crime rate and had led to some disproportionate sentences.

Labour wanted to repeal it during its first term but was blocked by coalition partner NZ First.

* An opinion poll commissioned by the Taxpayers' Union showed Labour slipping below 40 percent for the first time since the pandemic began, Stuff reported.

Labour rated 39.3 percent, a six point drop since the last poll a month ago, while National gained 3.7 points to reach 26.2 percent. The Greens gained slightly to reach 8.6 percent.

The poll was conducted by Curia Market Research and showed that if an election was held now Labour and the Greens could form a government with 62 seats out of 120.

She'll be meeting foreign ministers and US Secretary of State Antony Blinken before returning on 28 November.