In today's Covid-19 updates: the possibility of a border system to allow vaccinated Aucklanders to travel outside the region over summer has split officials, while the opposition proposes a new isolation system for incoming travellers. 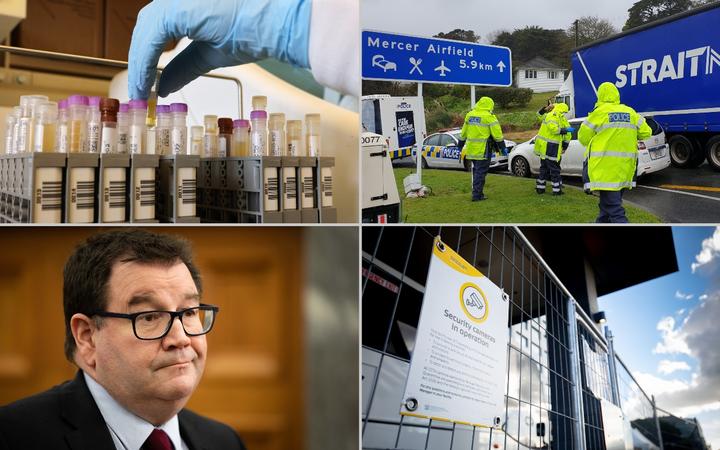 Yesterday, the prime minister suggested that vaccinated Aucklanders may be able to travel beyond their region's border by Christmas and over summer.

While there will not be boundaries once the traffic light framework - which relies on 90 percent vaccination - is fully in place, the government is working out a system to make travel possible if boundaries remain.

"We haven't made that decision yet. It's an option. We're just working through what the practical options are to ensure that we don't end up with people spending days sitting in their cars."

Police Association president Chris Cahill told Checkpoint today he was "flabbergasted" at the news, saying a checkpoint for holiday travel out of Auckland should not be in place at all.

"Straight away you can see it's an impractical idea, and that's the feedback we've had from our members, how would they ever think this would work?

"We'd be against what we're hearing at this stage [about the options], it looks unmanagable to us, the borders are already stretched from a policing perspective and these sorts of ideas will just place a lot more strain on police, there'll be a lot more staff required to be allocated to those borders and they just do not sound practical."

About 300 staff are already involved in Auckland's border operations, he said.

"If over or 90 percent of Aucklanders have been vaccinated, it's actually a very small proportion of people numbers wise, who will try to leave that aren't vaccinated, so can you actually put that many police resources into what may be [policing] a couple hundred people at most."

University of Auckland's centre for supply chain management director Tava Olsen told Checkpoint a system for Auckland travellers to cross the border in the summer holidays would be "doable" if government got to work on it right now, but it would be very difficult.

"There's just no way you could check all those 43,000 cars, so people would actually have to sign up for a spot and some people wouldn't get to leave Christmas Eve.

"I would probably have a system where you're going to do spot checks, and you're going to have big fines for people who haven't got all their paperwork in order. That is a slightly riskier system because you aren't checking everybody."

On Thursday afternoon, Hipkins released a statement saying, "no system will be perfect," and it would be challenging but the government was working on options

On the other hand, deputy prime minister Grant Robertson told First Up while they want to ensure there was a way for Aucklanders to travel, there would probably be a better option than time slots.

"I don't think it's particularly likely that there would be the kind of scheme where you were allocated a day.

"I can't see that - it wouldn't be very practical. But we do have to find a way through in the event that we still have a boundary there."

Auckland Chamber of Commerce chief executive Michael Barnett told Checkpoint if Auckland's overall vaccination rate is over 90 percent of double doses by the Christmas holidays, then Aucklanders should be free to travel across the border without checks.

"Police are not travel agents and I don't believe that they would be able to manage," he said.

"I can't see any other system that they can put in place between now and the beginning of the Christmas holiday period.

"If you tried stopping those vehicles, you'd have a backup from Pokeno back to Auckland, and the same thing the other way. I don't believe it's workable."

There are 139 new community cases of Covid-19 today (136 in Auckland, two in Waikato, and one in Northland).

A new daily record has been set for the number of people in hospital with the virus now at 64.

Meanwhile, Tonga's first case of Covid-19, who arrived on a repatriation flight from Christchurch last week, has tested negative after a second round of testing.

The Ministry of Health has confirmed the death of a person, who tested positive and was isolating at home, last night was not vaccine related. The coroner is investigating.

The makers of the Covid-19 vaccine Novavax have applied for provisional approval from Medsafe to use it in this country.

At the end of last year, the government announced a deal with Novavax to purchase enough of the vaccine for five and a half million people, but its global rollout has been hit by production delays.

The National Party has launched a petition to scrap the MIQ system for double-vaccinated travellers from low and medium risk countries.

The party's proposal would require people test negative for Covid-19 before and after they land, and have them isolate at home for a week, using the same protections being used in the government's at-home self-isolation trial.

In the trial, participants must answer a randomly timed video call three times a day which detects location via GPS, and may only leave their room to collect contactless food and deliveries, for testing, or to get some fresh air if they have a backyard that no-one else accesses.

The government has signalled it would start easing MIQ restrictions early next year.

It was also revealed this morning that just 294 people with Covid-19 in the current community outbreak are in MIQ facilities, with the rest isolating at home and about 1000 cases waiting to find out if they will be moved to quarantine.