The South Island's streak of no Covid-19 community cases ended over the weekend, prompting discussions about how to reduce further spread. 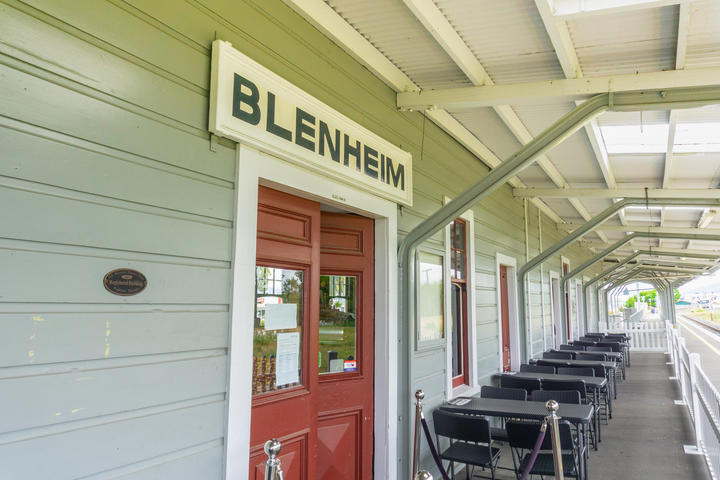 Blenheim's old railway station: the town is the first place in the South Island where a Covid-19 case has been found in the community in almost a year. Photo: 123rf

Already there have been calls for travellers to the South Island to have a pre-departure test and be vaccinated.

So far, three contacts of the Blenheim case have returned negative results and no one else has tested positive.

But Marlborough accommodation provider Shane Roughan said it has been a wake up call after close to a year with no Covid in the South Island.

He was already noticing the impact of the Blenheim case on his businesses.

He offered about 250 beds to backpackers and RSE workers, and was preparing for a boost over the Labour weekend.

"No one's come to the region. Like we're actually quite gobsmacked that we'd had no contact, no calls, nothing to look for any accommodation at all, which previously, even though Covid's been around for quite some time now, we'd still have people making enquiries and things like that. Where as, we've just had nothing."

He wouldn't rule out only those vaccinated being able to travel to the South Island if the government gave it a green light.

"I probably would support that because the government has said 90 percent is the vaccination rate until things open up and we can't really do a lot about that.

"If we can encourage anyone to get vaccinated, and if that means you can't travel to and from the South Island without a vaccination, we'd happily support that.

"We're not in a position to turn people away from our accommodation if they haven't been vaccinated because it's just revenue we can't find elsewhere."

The Mayor of Marlborough District, John Leggett, was pleased no further cases had been reported in his district.

"There's sensible people out there who follow rules. There's some that don't think it's going to affect them and don't think it's going to affect our community, and it's those people we really need to target, to let them know in very clear terms - this is a potential health crisis in our region as it is right through the country so being vigilant, following the rules."

"It's been a very good reminder for us."

He was not so keen on travel to the South Island being restricted to only those vaccinated.

"I've heard that from a few people ... I'd prefer to see testing before they hopped on the plane if there was a way of achieving that.

"But look we know how easily this has spread down through the North Island from the Auckland region and it's made its way into the South Island with the case we've had here over the weekend so there's always the potential for that to happen."

General manager of Highview Apartments in Queenstown and Marina Terrace Accommodation in Wānaka, Carlyn Topp, said she hoped the Blenheim case would lead to more people getting vaccinated and less complacency in the South Island.

Vaccine mandates would be a nightmare logistically, but she could see them eventually being used for some domestic travel, Topp said.

"The uncertainty is really hurting a lot of businesses. We're all living week-by-week at the moment. If the government could put in place a plan, look at the end result that we're wanting - we're wanting to get back to international travel - and work our way back."

When asked if vaccination entry could be on the cards, Covid-19 Response Minister Chris Hipkins had a simple response.

"We're not proposing to cut the South Island off from the rest of the country."

Any residents in Marlborough, Nelson and Tasman with symptoms are being asked to get tested.