There are two new cases of Covid-19 in Northland and they are contacts of a recently diagnosed case in Auckland. 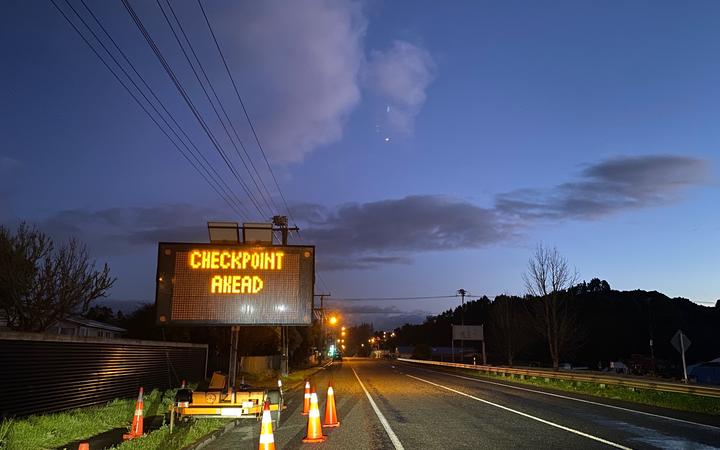 A checkpoint on the border of Northland and Auckland. Photo: RNZ / Katie Todd

The Ministry of Health says the pair recently travelled to the Kaikohe area from Auckland and the travel was permitted under alert level 3.

They are not linked to earlier reported cases who visited Northland.

The individuals were tested on 20 October and are now isolating.

They were not included today's case numbers as their test results were received after the ministry's daily reporting period.

Covid-19 Minister Chris Hipkins said a return to alert level three in Northland this weekend was not on the cards, based on the information he had been given.

"They had been tested, they were required to be tested as they were crossing the border, they have kept good records of where they've been, so contact tracing is proceeding at pace. Therefore the feedback I've had ... is that they don't think there's an uncontained risk here, the risk is contained," he told Checkpoint.

"A case investigation is underway and so far it has identified a limited number of close contacts. These individuals are currently being tested," the ministry said in a statement.

"The situation is currently being assessed and the Ministry will provide further public health advice if required."

It was inevitable the Delta outbreak would reach the Far North, he said.

Sixty percent of people have had a dose of the Pfizer vaccine in Kaikohe and 41 percent have had two.

Additional testing in the area is being arranged and details will be available on the Healthpoint website.

Ngāti Hine Health Trust chief executive Geoff Milner told Checkpoint "Covid has arrived in the mid-north" and that it was "hugely concerning".

He commended the whānau, that lived rurally between Kaikohe and Kaitaia, for proactively getting tested and using the Covid Tracer app.

Milner expected locations of interest to pop up in Kaikohe, Kaitaia and Whangārei.

He understood that the third case reported tonight was "working through the system".

"We were updated by the DHB on that particular case. It's much earlier in the process than the two whānau in the mid-north, but we're bracing ourselves that that is the third case in Northland.

"Our message to those people who are ... playing the game late ... the Fat Lady is singing and it's time to engage in the vaccination process."

Milner said it was too early to make a call on alert level changes for Northland just yet.