The company hoping to mine the Barrytown Flats north of Greymouth has provided more information on the project for the commissioners evaluating the project. 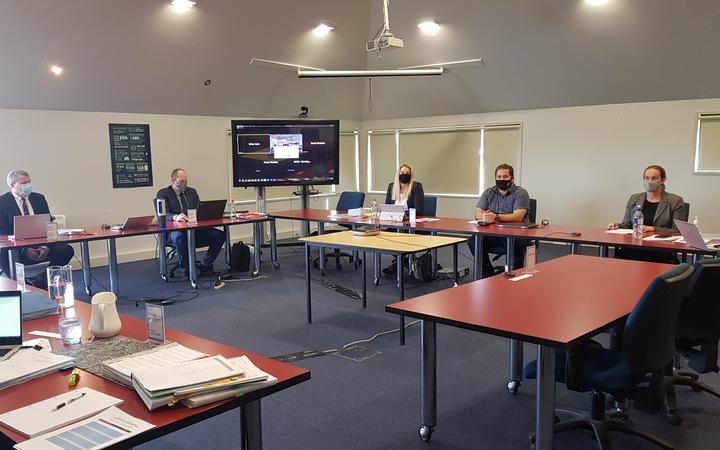 An earlier hearing in Greymouth, of the application by Barrytown JV Ltd to mine 63ha of farmland. Photo: LDR / Lois Williams

Barrytown JV Ltd wants resource consents from the Regional and Grey District Councils to mine privately-owned farmland for ilmenite and other minerals, over an eight-year period.

The mineral sands would be processed on site and the ore trucked to either Westport or Greymouth for export.

The resource consent hearing by an independent panel was adjourned earlier this month when the commissioners gave the company two weeks to come back with additional material on the environmental impacts including traffic and noise.

Coast road neighbours of the proposed mine told the hearing they were seriously worried about their ruined views, the potential noise nuisance and the increase in truck traffic on the winding coast road (SH6).

Among other changes to its plan, the company is now proposing to build higher bunds around the site, change the layout of the load-out area to minimise noise, and run a passenger van to transport staff and minimise traffic movements.

In his revised transport report, the company's traffic consultant Nicholas Fuller says 156,000 tonnes of material per year could be removed from the Barrytown site and the activity would remain within the relevant thresholds.

Based on a 30-tonne load in each truck and trailer, there were four potential scenarios.

The company has applied to operate sevens day per week operation, generating 15 loaded trucks per day (30 movements per day) giving an average of 1.25 trucks per hour over 24 hours.

Working fewer day would mean more trucks on other days: a six-day working week would generate 17 loaded trucks per day - an average of 1.4 trucks per hour over 24 hours.

And a five day week would mean 20 loaded trucks or 40 movements per day.

All three scenarios fell within the thresholds of the traffic plan and hourly limits could be set to an average of two truck movements per hour and a maximum of four per hour at peak times.

Staff vehicle traffic would be substantially reduced by the use of a passenger van service similar to the Strongman mine one, Mr Fuller said.

"Given the above, I continue to consider that the transport effects of the proposed activity on the surrounding transport network are acceptable."

The company was proposing to move its load-out area further away from the neighbour at 3195 Coast Road, and from the north east corner of the site, mining noise levels would comply with the council's decibel limits, Farren reported.

"Daytime noise levels are less than 50 dB at the majority of dwellings for the majority of the time, which is the outcome being sought .. the relocated loadout area will comfortably comply with the District Plan permitted activity night-time noise limit of 45 dB."

Landscape architect Chris Gasson said the mine site plan had been revised in response to submitters concerns at the hearing.

"The loadout facility has been located with the processing plant, and I have recommended that bunding be increased in height to 2.5m. The access road has been shifted further away from the southern boundary of the site."

Fast-growing alders would be used to screen the mine site, along with native species, planted two years before any mining began.

The ilmenite mine would lower the ground level of the flats by half a metre, the commissioners have been told.

But the company's water management plan sets out to avoid, remedy or mitigate hydrological effects in Collins Creek, Canoe Creek, Canoe Creek Lagoon, Deverys Creek and the springs on the Langridge property to the south, according to hydrology consultant Zeb Etheridge.

"The key rehabilitation objective is to minimise hydrological changes relative to baseline conditions and avoid impacts on the Langridge property springs and wetlands to the north of the mine site whilst maximising the land quality of the rehabilitated site ."

The proposed extraction area covered 114ha of pastoral farmland between Deverys Creek and Canoe Creek with an average excavation depth of up to 10m and a maximum excavation depth in the order of 15m, Etheridge said.

"Mineral extraction may require partial depression of the water table in the active extraction area and the diversion of small creeks or farm drains while the mine pit traverses the site. Water will also be taken from the dewatering operation for mineral processing."

But the water would be returned to the local hydrological system; the proposed mine life was approximately 10 years (over a 13-year consent term), and the proposed activity represented a nonconsumptive water take of short-term duration.

Detailed design of the processing plant and adjoining buildings had also taken into account the need to limit external lighting and vehicle movements to avoid effects on tāiko, Dr Bramley said.

"The design of the building, including no windows on the western and northern sides as well as the 2.5m bunding around the entire site means that there is substantially less potential for light spill than was anticipated in my initial assessment.

"The loadout is located on the eastern side of the building and has roller doors that can be closed when not required thereby avoiding light spill. Furthermore, the decision to avoid night time truck movements between 1 November and 31 January will also negate the risk of attracting petrel during those times."

The additional information from the consultants now goes to the neighbours and groups invited to comment of the mine proposal, in the limited notification process.

The hearing is due to reconvene on 26 November.