Iwi-led border control checkpoints are being deployed today in Northland. 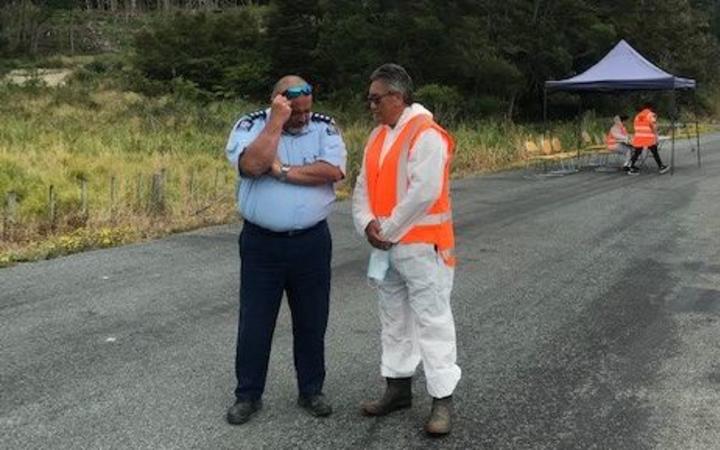 Hone Harawira talking to Inspector Riki Whiu at the Waiomio checkpoint in Northland back in January - the checkpoint will be in place again from today. Photo: RNZ / Nita Blake-Persen

The region is now at alert level 3 after a Covid-infected Auckland woman tested positive in Whangārei.

The new restrictions will remain in place until 11.59pm Tuesday and will be reviewed at Cabinet on Monday.

The woman has not given a reason for being in Te Tai Tokerau and has not been open about her movements.

Covid-19 Response Minister Chris Hipkins is not ruling out dropping charges against the woman, in a bid to cut a deal for her cooperation.

He said the woman has not been providing information to health officials, and he will consider options which might encourage her to be more open.

Hipkins said sometimes taking a hard line makes it less likely someone will cooperate, and if there are things officials could do to help her be more open, then the government will look at that.

Te Tai Tokerau Border Control spokesperson Hone Harawira said he is burned out and frustrated, because the situation could have been better managed.

He said he is annoyed at what the woman has done.

"But when you look at it the reality is that somebody built a prison and every third window's been left open, don't blame the prisoner for escaping."

Harawira said the Crown set up the whole system and they have failed the most unvaccinated, rural Māori population in the country time and time again.

He said if the government had let iwi into its decision-making process and provided information, the problem could have been tackled before it escalated.

"For months now we've been saying to the Crown you've got to allow iwi and border control to be at the top table in making decisions on things like border controls and exemptions and medical information - the decisions that help save people's lives." 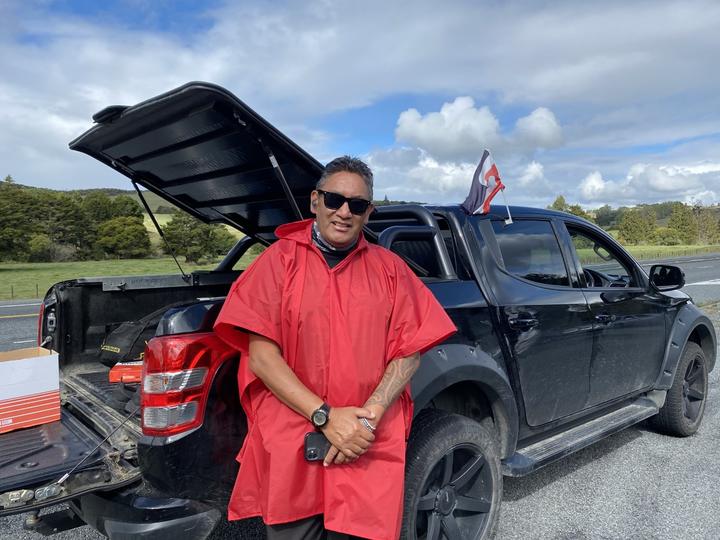 Hone Harawira is critical of the way the government has managed the Covid-19 situation in Te Tai Tokerau. Photo: RNZ / Talei Anderson

Harawira said the North is a Covid-19 disaster just waiting to happen.

He said Northland would not have had to be put into alert level 3 if the government had better managed border controls, the exemption process and the way in which decisions were made with the people of Te Tai Tokerau.

Harawira said Te Tai Tokerau Māori live in some of the country's most deprived communities with poor housing standards and long waiting lists for state housing.

"We are a Covid disaster waiting to happen eh, with all of the comorbidities that go right up - they are endemic within the Tai Tokerau population.

Low vaccination rate must be lifted

"Māori people will die fast and die early if they're not vaccinated, so got to lift the game, but to change the game to try and involve more and more people in the process of trying to fight this Covid at every level."

National Party spokesperson Dr Shane Reti who is a practising doctor and part of the Ngāti Wai health provider vaccines team agrees that vaccination is a challenge in the region.

"In the target group across the country which is Maori under 40 we have the lowest vaccination rate in that target group and that's one of our risk factors right there.

"That's why a coronavirus coming into Northland is such a challenge for us because our vaccination rates are so low."

Dr Reti said even prior to Covid-19 the national immunisation registered indicated that about 12 percent of Northland parents declined to have their children immunised and that has been amplified with coronavirus.

"We do have a high rate of vaccinate hesitancy here in Northland and that is one of our challenges."

Reti believes a door to door approach will be needed to get more people vaccinated and primary health care providers should be involved since people already have trust in their GPs - and building trust is key to breaking down vaccine hesitancy. 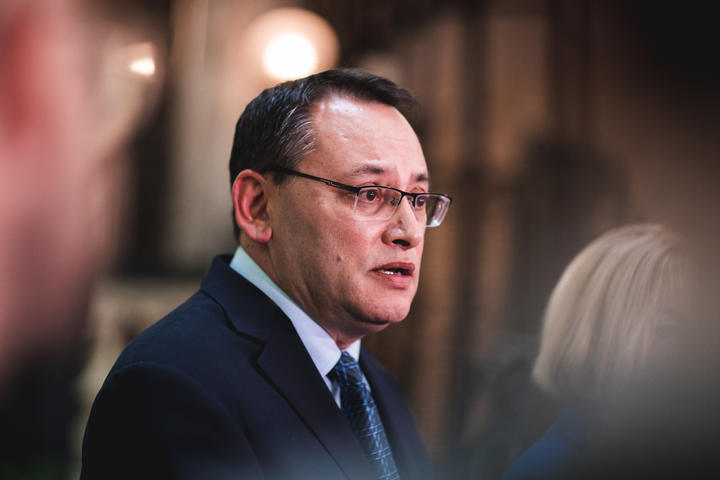 Dr Shane Reti said Northland has the lowest vaccination rate in the country for the target group of Māori under 40. Photo: RNZ / Samuel Rillstone

Harawira believes that Auckland should have been put into alert level 4 last week when they had a spike of 45 cases in one day.

He said he is aware that whānau in Auckland are doing it tough.

Harawira said he hopes the fact that Northland is now in level 3 will send a signal for whānau to stay home.

"We'll be doing our best to be as visible as possible and just send a clear message to people - if you don't need to be moving, go home."

Harawira said anyone from Te Tai Tokerau who sees whānau from Auckland or Whangārei they should tell them to turn around and go back.

If they refuse to, call the police because they should not be in Te Tai Tokerau and present a threat to the wider community, Harawira said.

Three new locations of interest have been published in Te Tai Tokerau.

They are the Comfort Hotel Flames in the Whangārei suburb of Onerahi, on Saturday 2 October from 6pm to 6.30pm.

Also in Onerahi, Pepe's Dairy is a location of interest from Sunday 3 October from 9am to 10am.

The Department of Conservation Uretiti campsite in Whangārei is the other location, on Sunday 3 October, from 5pm to 6.30pm.

The Ministry of Health named the locations at midday today.

Last night contact tracers had only been able to identify two petrol stations in Whangārei.

What else can Northland do now?

Dr Reti said the district health board has already increased the number of sites to get tested for Covid-19 and hopefully saliva testing will be available as an option because that will increase the number of tests able to be done.

He said then there is improving the vaccination rate and adhering to public health measures such as masking and social distancing.

"These three things will determine the outlook for Northland in the next few days, the next few weeks and possibly even the next few months - how well we can do that together as a community."

Dr Reti said he has been quizzing the Northland DHB for a number of months over its capacity to deal with a Covid outbreak.

"My sense is we could deal with a smallish size outbreak and bigger than that we'd struggle."

Dr Reti said on 1 September in Auckland which has the most ICU beds in the country there were eight active cases and they had to call out for 30 nurses.

"So eight cases was nearly enough to bring down Auckland ICU - it doesn't require much ... to overwhelm resources."

*This story has been amended to remove a quotation from Hone Harawira stating there there were 180 cases of Covid-19 in Tai Tokerau in late August. All cases reported by the Ministry of Health in August were in Auckland or Wellington.