There are 29 new community cases of Covid-19 reported in New Zealand today as Cabinet prepares to decide on alert levels. 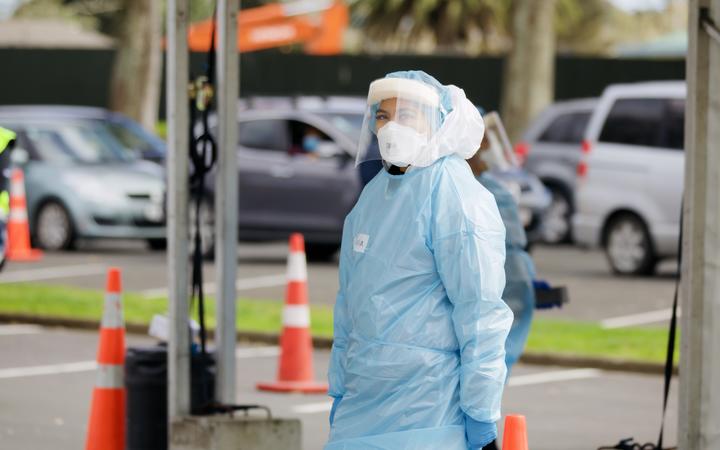 In a statement, the Ministry of Health said there were also two new cases at the border.

It said 28 of the new cases were in Auckland and one was in Waikato.

Of the new cases, 21 are epidemiologically linked and eight are being investigated.

That brings the total number of community cases in the current outbreak to 1357. There have been 4025 cases since the pandemic began.

The ministry said 19 of yesterday's 33 cases have exposure events.

There are 15 epidemiologically linked sub-clusters - seven are active, one is contained and seven are dormant.

There are another 14 unlinked sub-clusters - five are active, one is contained and eight are dormant.

Thirty people are in hospital with Covid-19 today - three in North Shore, 13 in Middlemore, 13 in Auckland and one in Waikato.

Five patients are in intensive care or high dependency units.

In total, there are 1184 open contacts being managed - 81 percent of them have received a call from contact tracers and 71 percent have had at least one test.

As of 10am this morning, there are 138 locations of interest.

There have been no unexpected wastewater detections in the last 24 hours.

It also said the country passed the 2 million mark for second doses of vaccine administered (2,018,305) today.

On the North Shore Hospital maternity ward case, the ministry said Waitematā DHB advised them late yesterday that a nominated visitor to the hospital's maternity ward tested positive for Covid-19. The baby and the baby's mother were subsequently tested and the baby has returned a positive result, while the mother was negative.

"The mother and baby had been in a single room in hospital - separated from other mothers and babies - for the duration of their care and the positive case visited them twice while potentially infectious. The mother and baby have now been relocated to a Covid-19 appropriate ward and safety protocols are in place.

"A small number of staff who have potentially interacted with the visitor have been stood down as a precautionary measure while investigations continue and Waitematā DHB fully assesses the situation to determine if any other actions are required."

"Auckland DHB is working at pace with the Auckland Regional Public Health Service to investigate this case and identify any potential contacts.

"The patient was separated appropriately on arrival at the ED as being at risk for Covid-19 and staff were wearing appropriate PPE including N95 masks. They had also previously visited the ED and returned a negative test on Saturday, so it is believed the infection has been identified early.

"Auckland DHB advice is that patients and whānau who have been at Auckland City Hospital and in the ED do not need to take action unless they are contacted by public health officials."

Meanwhile in the Waikato region, Raglan, Te Kauwhata, Huntly, Ngāruawāhia, and Hamilton City moved into to alert level 3 today and will stay there for at least five days.

The ministry said overnight three household contacts of the Raglan case tested positive for Covid-19 - one of which is a newly identified household contact living on the property - and all have now been moved to an Auckland quarantine facility. "These will be officially recorded in tomorrow's case numbers."

"Meanwhile, initial tests from all four close contacts associated with worksites of the Auckland-based truck driver, who is isolating in Palmerston North, have returned initial negative results," the ministry said.

It also said whole genome sequencing for the Raglan case and the Hamilton case have both been completed confirming both cases are linked and both cases are also linked to one of the sub clusters in Auckland.

Waikato DHB has told the ministry that there has been a strong response to calls for people in Hamilton with symptoms to get tested.

Director-General of Health Dr Ashley Bloomfield says as well as the 29 new cases today, there are three other household cases linked to the Raglan case who will be included in tomorrow's number as they were entered into the system after 9am.

He says an additional 25-30 more cases are expected from household and other close contacts.

The ministry said the DHB says there's high demand at the community testing centres in Hamilton and Raglan.

Prime Minister Jacinda Ardern this morning said Cabinet would be looking to ease lower risk options in Auckland and the cases in the Waikato were not material to that decision.

She said there were other options rather than simply moving down an alert level.