The news that New Zealand police had shot dead a terrorist quickly made headlines around the world. Here's how overseas media saw the attack. 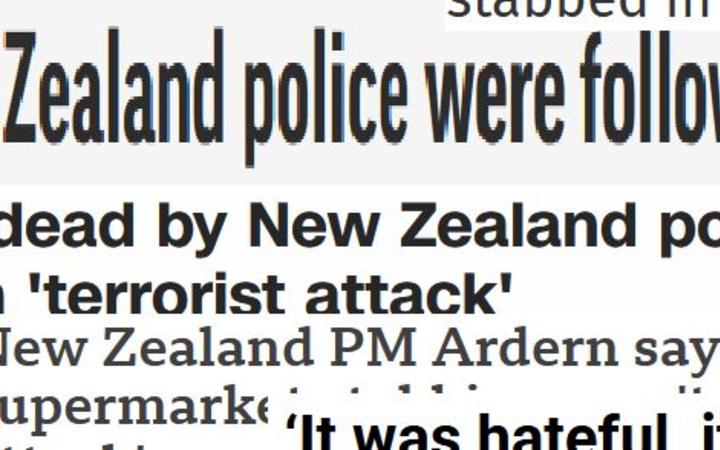 A man armed with a knife injured six shoppers before he was shot dead by police in an Auckland Countdown supermarket yesterday.

The piece quotes one of their journalists, Phil Mercer, with this analysis:

"This callous act in Auckland will stir painful memories of the deadly mosque attacks in Christchurch in 2019….The assailant had, for years, been identified as a threat to national security and was under 24-hour surveillance. The police acted decisively to prevent further carnage, but they weren't close enough to stop serious injuries. New terror laws could, however, allow volatile individuals to be detained in the future."

Meanwhile The Times included a graphic image, and says the attack "raised questions about the strength of the country's anti-terrorism laws."

Breaking News: Six people were injured in a knife attack at a supermarket in New Zealand. The prime minister, Jacinda Ardern, called it a “terrorist attack” that had been carried out by a “violent extremist” inspired by the Islamic State. https://t.co/s33q3KDro1

The AP also chose to add quotes, this time around 'terrorist': New Zealand police kill 'terrorist' after he stabs 6 people, while Al Jazerra headlined with Ardern's 'hateful and wrong' comments.

The AP piece quotes Sri Lanka's government expressing shock and sadness over the attack attributed to a person of Sri Lankan origin.

"Sri Lanka condemns this senseless violence, and stands ready to cooperate with New Zealand authorities in any way necessary," its Foreign Ministry said in a statement.

As PM Jacinda Ardern has stated, the perpetrator alone bears responsibility for these acts.

The attack was carried out by an individual, not a faith, ethnicity or culture.

’s Sri Lankan community is, and will always be, an integral and treasured part of Kiwi society.

The Daily Mirror in Sri Lanka says the Foreign Ministry there was seeking more information from the New Zealand authorities over the incident and had yet to receive any details.

Time magazine pointed out New Zealand's 'strict lockdown': "Auckland is in a strict lockdown as it battles an outbreak of the coronavirus. Most businesses are shut and people are generally allowed to leave their homes only to buy groceries, for medical needs, or to exercise."

Australia condemns the horrific terrorist attack in Auckland. Our thoughts are with all those affected. We stand with our Kiwi family in deploring all such violent acts designed to create fear and divide us. Kia kaha New Zealand.

Across the Tasman, the Sydney Morning Herald focusses on the legal avenues, while the ABC quotes Jacinda Ardern saying "legal constraints prevented her from discussing everything that she wanted to about the case, but she was hoping to have those constraints lifted soon".