Police are still dealing with level 4 breaches across the country but say they are overall happy with the level of compliance. 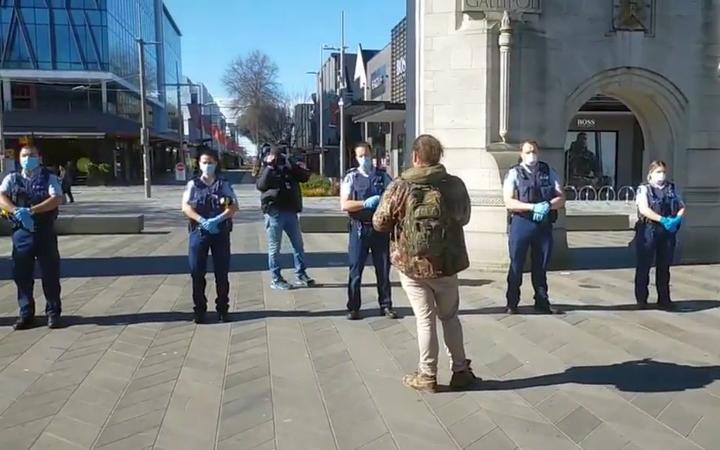 The police line up at an anti-lockdown protest in Christchurch last week. Photo: Screenshot

"New Zealand police continue to thank the vast majority of our community for doing the right thing under alert level 4 restrictions despite a few incidents over the weekend that are concerning," Police Commissioner Andrew Coster said in a statement.

Since level 4 came into place at midnight Tuesday, 23 people have been charged with a total of 27 offences nationwide as of 5pm yesterday.

These arrests are primarily the result of protest activity, police said.

In the same time period, 65 people were issued with formal warnings.

Police have also received a total of 4487 breach notifications from the public. Of those, 2550 were about an illegal gathering, 1542 were about a business, and 395 were about a person's actions.

Police have issued 174 infringements as of 5pm yesterday, with 146 of those being because the person failed to remain at their current home/residence.

"Overall, police are encouraged to see how well people are behaving across the country but there is a small number of people who are continuing to flout the rules," Coster said.

Police managed to prevent a planned protest at Aotea Square yesterday afternoon and around 30 people were turned away. Two women were arrested and charged and both are scheduled to appear in Auckland District Court on Monday.

Several other people were arrested last week at protests.

In Auckland overnight, at about 3am, Waitematā Police arrested a 26-year-old man who was seen driving around and was wanted by police in relation to an alleged burglary last week. He has been charged with receiving stolen property and obtains by deception and also received an infringement notice for breaching level 4 restrictions.

In Otago on Friday morning, seven men from six separate bubbles were found jet boating by a police officer who was patrolling along the Makarora River. One of the men had travelled from Dunedin - a four-hour drive, police said.

"Police has a low tolerance for deliberate breaches of the rules and will act quickly to enforcement if required," Coster said.

"With the delta strain of Covid-19 being more serious than what we have previously seen it is incredibly important that people follow the rules to keep ourselves, our loved ones and the wider community safe."