Pensioners who are already paying more than they can afford to live in Marlborough's senior housing will be put further behind by a new rent increase, a tenant representative says. 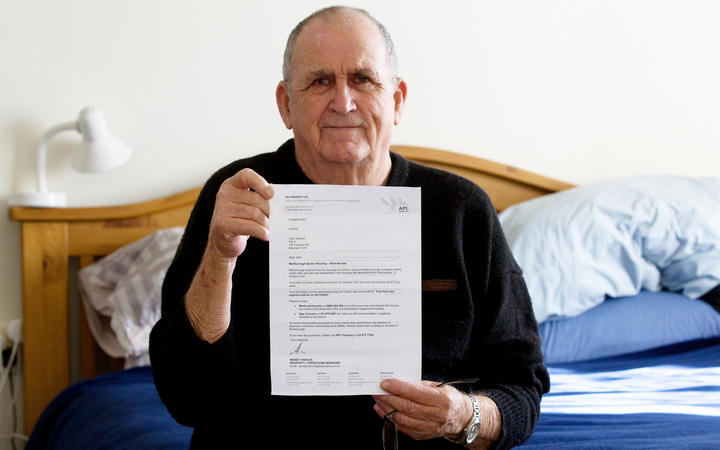 The council said the increase would be used to balance the account that maintains their flats - which is currently thousands of dollars in deficit after a rent rise was skipped two years ago.

Pensioner John Gilkison said at first his neighbours were delighted their new rent was still much lower than the average rent price in Blenheim. That was quickly replaced by a feeling seniors were "never able to get ahead".

"Any increases we see in our pension are almost always sucked straight out. What's overlooked is the effect this has on people's day-to-day lives. It makes things difficult when trying to plan long-term, let alone plan week-to-week," Gilkison said.

Gilkison said some of his neighbours already needed their families to help them cover their bills, while others relied on their 5 percent GoldCard discount to buy groceries.

"What you can afford to put in your shopping basket now is a lot less than it was a year ago. Prices have jumped hugely."

Gilkison had started sitting down with his neighbours and checking if they were eligible for the Accommodation Supplement - a benefit paid to those who could not afford their own housing costs. He could not access the benefit himself because he had assets like a pre-paid funeral plan.

"I can get by, but I'm worried about the ones that are living week-to-week on their pensions. There's a few of them here."

A person living alone and receiving superannuation could receive up to $105​ a week from the Accommodation Supplement if in Blenheim, or up to $80​ a week if in Picton.

Almost half the pensioners renting a house in Marlborough were on the supplement as of June, including many of the council's senior housing tenants. Tenants were encouraged in their letters to check with Work and Income New Zealand (WINZ) if they were taking "full benefit" of the supplement.

The letter also said the council based its senior housing rent on average regional rent prices, which "continue to increase". 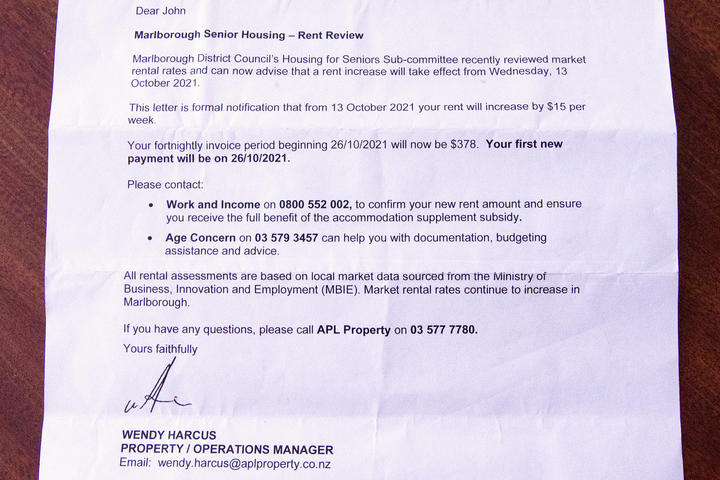 The council has encouraged residents to check if they qualify for the Accommodation Supplement with Work and Income New Zealand. Photo: LDR / Chloe Ranford

Figures put to the housing for seniors sub-committee last month showed the rent of an average one-bedroom flat in Blenheim was $280 a week, while a two-bedroom was $385.

To keep in line with the average rent, as was required by the council's own policies, the council would need to increase its weekly rent by up to $50 for a one-bed and $82 for a two-bed.

Gilkison was one of seven tenants promised by the sub-committee at its meeting that this year's rent rise would not take them "within a bull's roar" of the average rent in Blenheim. He represented tenants in the Cleghorn St units.

But seniors did not know what their new rent bill was until this week, because the council set rents behind closed doors.

"On one hand, we need to ensure the senior housing portfolio breaks even and is sustainable in the long-term without relying on Marlborough ratepayers to fund the shortfall. On the other hand, we need to weigh up the impacts a rent increase may have on our tenants," she said in a statement. 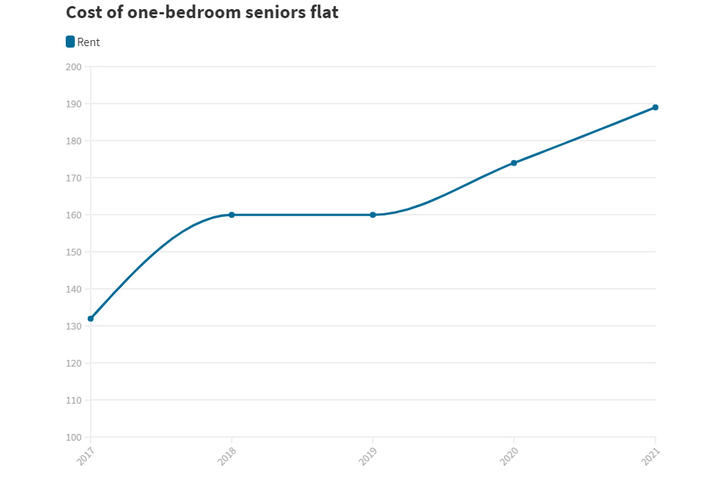 The price of a one-bed unit has gone up almost 46 percent in the last five years. Photo: LDR / Chloe Ranford

The council put through an unusually large senior housing rent increase in 2018 to balance the portfolio's books, but then skipped a rent rise the following year in a bid to let pensioners adjust, which put it behind financially again.

"We have always tried to adopt a rental policy that allows [the] council to break even on its rental portfolio so that it is not a burden on all ratepayers. Without a rent increase, which has been kept to the absolute minimum, the portfolio was facing a loss of around $140,000 this year," Brooks said.

Ratepayers have forked out hundreds of thousands of dollars in the past to get the senior housing portfolio out of deficit, because the shortfall was not being plugged by its tenants.

Senior housing tenant Sue Brien said representatives from each complex would chat to their neighbours about the rent rise and discuss the "general reaction" at a meeting this month.

"We will be liaising with Grey Power Marlborough, who are supposed to take our thoughts back to the council," she said.

Brien personally thought the rent rise prevented pensioners from "getting ahead", especially when living cost were rising.

The new rents would come into effect from 13 October.