There are five new cases of Covid-19 in managed isolation and quarantine facilities (MIQ) reported today.

Earlier today it was revealed that a Covid-19 positive patient from Fiji is being flown to New Zealand today.

The ministry said its approval follows agreement by the metro-Auckland DHBs to treat the patient, and a transfer plan approved by a Medical Officer of Health from the Auckland Regional Public Health Service and agreed to by New Zealand Air Ambulance Service.

"The plan takes into consideration the safety of both the patient and the crew who will be transporting the patient," it said.

"The metro-Auckland DHBs are working in an extremely busy and dynamic environment, due in part to higher than normal presentations of RSV and winter illness. The receiving hospital is yet to be confirmed, and will be determined by the treatment required by the patient and the capacity in the respective Intensive Care Units (ICUs).

"There are appropriate isolation and infection prevention and control plans in place at all the metro-DHB hospitals to accommodate this patient.

While this request was initially declined for capacity reasons, the metro-Auckland DHB ICUs have now confirmed that treatment can be provided, the ministry said.

The medevac flight left this morning and is due to return this afternoon.

The ministry said daily sampling from the New Plymouth wastewater treatment plant, along with further samples from sites around the Taranaki region is continuing this week. There have been no subsequent detections of the virus to date, it said.

Community testing is continuing and the ministry said between 21 July and 27 July 1082 swabs were taken in Taranaki, with all returning negative results.

The Mattina remains in quarantine in Bluff and is inaccessible by the public, the ministry said.

One of the Covid-19 positive mariners aboard the Mattina, currently in quarantine at South Port, was yesterday afternoon transferred to Southland Hospital and is currently in a stable condition.

"The transfer was done in a carefully planned and co-ordinated way, using all appropriate Infection, Prevention and Control protocols, working with St John Ambulance and other hospital staff, under the guidance of Southern DHB Medical Officers of Health," the ministry said.

"All crew members have recovered and a deep clean on the vessel has been carried out," the ministry said.

And on Viking Bay, 15 of the 20 crew members are now back aboard. The ship remains in quarantine at Queens Wharf in Wellington.

Five of the crew members remain in managed isolation in Wellington. 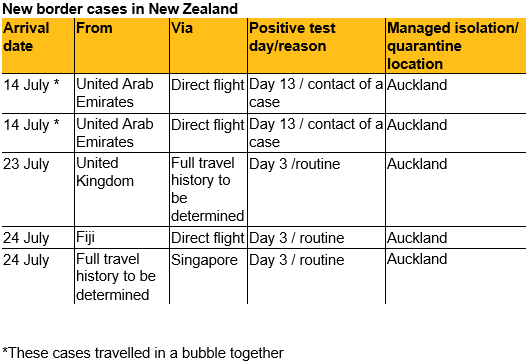 The ministry said two previously reported historical cases, associated with the Playa Zahara fishing vessel, have now been reclassified as 'not a case'. Neither case meets the current Covid-19 case definition, it said.

"As a result, these cases have been removed from our total cases count and our historical cases tally."

The number of active cases in New Zealand is 46 and the total number of confirmed cases is 2511.

The ministry said the full travel history has now been finalised for a case reported on Tuesday. The person arrived from the United Kingdom on 22 July and travelled through Singapore. They tested positive in routine day 3 testing.

Yesterday, there were 6486 Covid-19 tests processed. In addition, 5022 tests have been processed in Waikato between 17 May and 10 June.

The seven-day rolling average is 6557.