A new vision for Milford Sound recommends not allowing cruise ships in the inner sound and closing the airstrip. 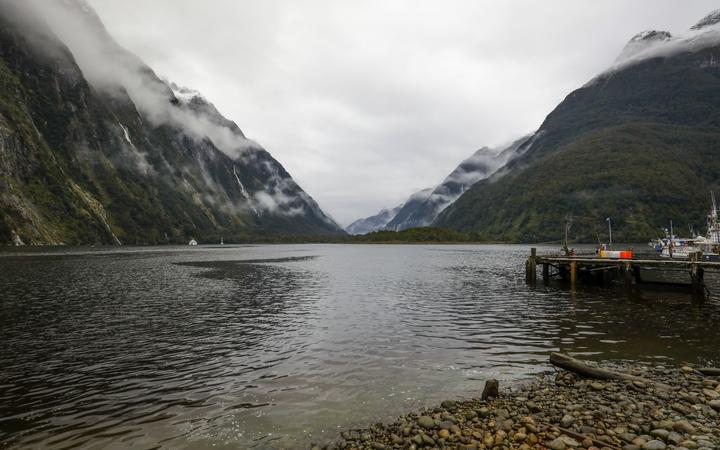 The Milford Opportunities masterplan has outlined recommendations for the the tourist destination. Photo: RNZ / Nate McKinnon

The Milford Opportunities masterplan outlining recommendations for the destination was launched on Wednesday in Te Anau.

Under the recommendations, New Zealanders would not need to pay to access Piopiotahi, but private vehicle parking would be limited.

International visitors would either pay for a parking permit or use a park and ride system to get to Milford Sound.

Funding from international visitor permits would be used to fund other elements in the plan including enabling conservation improvements and special protection projects.

Turner said the recommendation to close the Milford Sound airstrip and not allow cruise ships into the inner sound would affect people's livelihoods and be controversial.

"But the airstrip is in a poor state of repair, is already beginning to flood at extreme high tides, is very exposed to alpine fault tsunami risk and would be very expensive to rebuild to a modern and sustainable standard. It only carried about 3 percent of visitors in 2019.

"And the visual impact and risk of cruise ships are in conflict with the majority of land-based visitors, and they have other Fiordland options equally spectacular to visit."

Te Anau would be the hub for Piopiotahi with a combined visitor centre and park and ride.

"We believe Te Anau should be the start of that journey and we know that is a fundamental change for the market, but Milford Sound Piopiotahi should not be just a rush-in, rush-out place. We want to restore "the essence of the place". Visitors should feel the wairua (spirit) of the place, the tranquillity, the awesome surroundings and the wilderness," he said.

"There is rich Māori history both in the corridor and at Piopiotahi that would add to the visitor experience. The history and the legends need to be told correctly and the themes carried throughout the journey."

It would also include a combined visitor centre and park and ride in Milford Sound along with new hotel and staff accommodation and improving walking and viewing opportunities at the Sound as well as improving the layout on the very limited flat area in Milford.

"We received clear and strong feedback during the extensive engagement conducted throughout stages one and two, that the numbers, intensified by mass arrivals of buses from Queenstown around lunchtime, were causing parking congestion in many places, problems on the Milford Road and at the sound itself," Turner said.

The recommendation is that buses should be electric or hydrogen, with the longer term goal to make Milford Sound entirely carbon zero.

"We were asked to come up with something innovative, something challenging, something that will change the way tourism interacts with environment and conservation. I feel we have done that and now the hard work of implementation and decision-making on how to implement it begins," he said.

The Milford Opportunities Project began in 2017.