Is the country's supply of petrol, diesel and jet gas becoming more vulnerable to disruption? Yes, and no.

The country will remain reliant on tankers whether bringing in a lot of crude, as now, or swapping to just processed fuel imports, a consultant's report says. Photo: Rafael Ben-Ari/Chameleons Eye/ 123RF

The government has advice that goes both ways, just days ahead of a crucial decision on stopping all oil refining here.

Officials said the advice is not contradictory.

The National Party said the country cannot have confidence in the "inconsistent" advice and the lack of a government plan for energy security.

The country's only refinery at Marsden Point near Whangārei is poised to stop processing crude into different fuels, after nearly 60 years, and turn instead to importing readymade fuel from next year.

Refining NZ has recommended shareholders back this shift when they vote on 6 August.

Already, refining volumes have been cut, and the likes of roadmakers are grappling with how to ensure newly imported bitumen is up to scratch.

The government is weighing up the risks of the country losing all ability to make its own petrol, diesel and jet gas.

One report to the Ministry of Business, Innovation and Employment said this "would have a significant impact on New Zealand's fuel security".

But a second report, by the same Wellington consultant, said "it will not have a major impact on fuel security".

This second report suggested risks could actually be reduced as it's easier to source readymade fuel than crude oil overseas.

The ministry said it "doesn't agree that the reports are contradictory".

The first report was high level, while the second was "a more comprehensive and nuanced discussion of the risks", it told RNZ.

National's energy and resources spokesperson Barbara Kuriger said: "I just can't believe how the two reports have ended up so differently."

Consultants Hale and Twomey said that for the second report, they interviewed major oil importers, and for the first report they did not.

"On careful reading we remain comfortable with both reports and their recommendations in the context of what we were asked to do for each," Ian Twomey said in an email.

The first report went into detail about the eight risk factors, while the second report either did not address these, or said they can be managed:

The country will remain reliant on tankers - one arriving every two days - whether these bring in a lot of crude, as now, or swap to just processed fuel imports.

However, the shift to import-only at Marsden Point would cut supplies held in stock, to about 20 days' demand. The second report said that is thought to be acceptable, though it is much less than many countries' stockpile.

Most readymade fuel would be imported from North Asia.

The report modelled disruption to that source, say, from hurricanes or war.

It forecast it taking between three and six weeks to organise emergency supplies, but said that backup stocks would keep any fuel shortfall to a maximum of just three days.

This presumes international cooperation and the report did not model a failure in normal global trading activity.

However, the experience of Covid-19 showed fuel use could be curtailed dramatically in an emergency, it said.

The second report also suggested fuel supply risks could actually be reduced, because the country would be getting its fuel from more diverse sources offshore, instead of relying on Marsden Point to refine two thirds of supplies.

"This would remove refinery disruption ... as a single point failure risk." 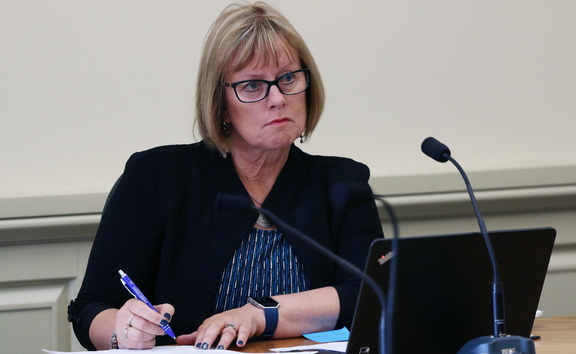 Also, it was easier to adjust the types of fuel imported, than to adjust refining here - an added flexibility given extra value by the pandemic, when jet gas has not been needed so much.

"MBIE is currently considering Hale and Twomey's recommendations in the second report and plans to provide further advice to the minister in the next few months," the ministry said.

National's Barbara Kuriger said if the consultants had talked to the industry in the first place, their first report might not be so different from the second one.

"If I was a minister, and I got two completely conflicting reports, I'd be asking where the truth was," she said.

"I suspect the truth is probably somewhere in the middle."

National could not change commercial realities which made Marsden Point uncompetitive with Asian refineries, but it could plan better to reduce energy supply risks, Kuriger said.

"We're becoming quite energy dependent on the rest of the world."

The government lacked a plan.

"The word I get most often when I talk to people in the energy sector is 'uncertainty'.

"There's a massive gap between now and when we're going to be totally reliable on our own renewable energy," Kuriger said.

The Marsden Point reports reveal a fundamental problem for the ministry trying to manage fuel stock risks: It is reliant on data that is often incorrect, and has been for years.

"The analysis of the supply chain inventory changes was made more difficult by the poor quality of MBIE's data as a result of incorrect stocks submissions by some industry participants," the second report said.

Companies were not penalised much for doing this, it said.

The ministry must fix this, the consultants added.

Kuriger was unimpressed. "If you can't measure it, you can't manage it," she said.