A coroner has found a man involved in two police pursuits in New Plymouth in 2019 drowned in a stream he had previously used as an escape route. 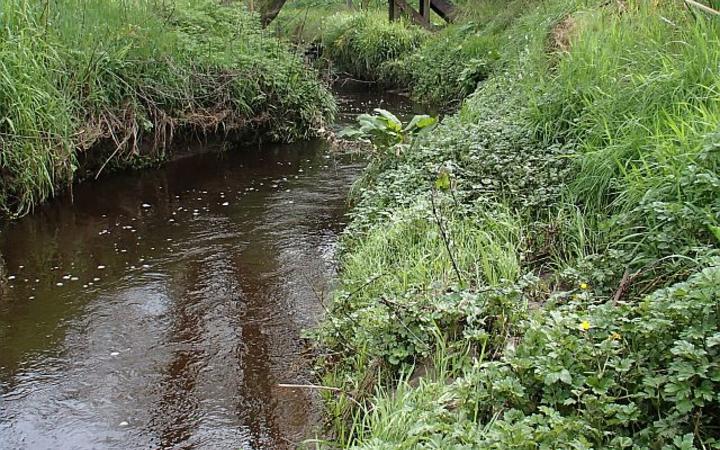 A dog walker found Holland face down in the Mangaotuku Stream at Devon Intermediate on 7 July - two weeks after he had been involved in two police chases in the city.

His death is also the subject of an Independent Police Conduct Authority investigation.

The 25 year old, who was bailed to an address in Christchurch, had breached electronic bail after appearing in the New Plymouth District Court on 11 June and not returning south.

Police issued an arrest warrant for Holland, who was associated with the Taranaki gang Uru Taha, or West Side, and recorded several sightings in the days after his court appearance.

On 24 June, Holland left his partner's address in Spotswood and police commenced a pursuit, which was abandoned because of the speed the vehicle was travelling.

Holland, who had a gang-related tattoo on his left cheek, was spotted again later and this time drove on the wrong side of the road to avoid police.

A short time later a member of the public reported the car had been abandoned in Moturoa, in the vicinity of Devon Intermediate School.

Police found a sawn off .22 rifle, ammunition, a machete and a plastic container of pink powder in the vehicle.

A cordon was put in place and police tracker dogs indicated a scent at the school in the stream area, but Holland was not located.

Two weeks later on 7 July, a member of the public was walking their dog around the grounds of Devon Intermediate at about 2.45pm when they saw what they thought was a body in the stream.

While looking down at the stream, the coroner's report said, he noticed an object in the water.

"The flow of the stream was quite fast due to recent rainfall. His initial impression was that it was a body, but before he phoned the police he went closer and confirmed it was a body.

"The head of the body was facing downstream and there was no movement."

A police officer who attended the scene described it as "muddy and looking like it had been in the water a couple of days".

In her finding, Fitzgibbon said some family members had raised concerns with her about the circumstances of Holland's death - without elaborating on what those circumstances were.

She said police investigated these thoroughly and maintained there were no suspicious circumstances regarding the death and no indication anybody else was involved, a finding she agreed with.

In the course of their investigation, police spoke to Rodney Holland, Thomas' father.

Rodney Holland said he had seen his son briefly on 11 June, but only learned Thomas had been involved in a police pursuit at his funeral.

He said Thomas had told him about his favourite escape routes from police, including the Devon Creek in reference to the Mangaotuku Stream.

"He knew the area well because he went to school there. Thomas told him that police could not get a scent through the water and he had previously used this to get away from police and other streams too."

Rodney Holland said his son knew how to swim but conditions in the stream would have made it difficult and he could have been swept away.

Dr White found Thomas Holland's lungs were fluid laden in keeping with drowning and although he had a black eye there were no other injuries that could have contributed to his death.

He had alcohol in his system, but below the legal limit for a driver aged 20, and the presence of cannabis was detected at a level too low to confirm.

Methamphetamine was found at levels of 3 milligrams per litre of blood, a level associated with recreational use and meth-related deaths, but Dr White concluded the cause of death was drowning rather than sudden cardiac arrest due to methamphetamine use. A conclusion Fitzgibbon accepted.

She found that Thomas Holland died on or about 24 June 2019 and that the cause of death was drowning.