A pilot's perfect use of te reo impressed a passenger so much that he asked to meet him and was blown away to discover the pilot wasn't Māori, but simply endeavouring to learn and use te reo as much as possible. 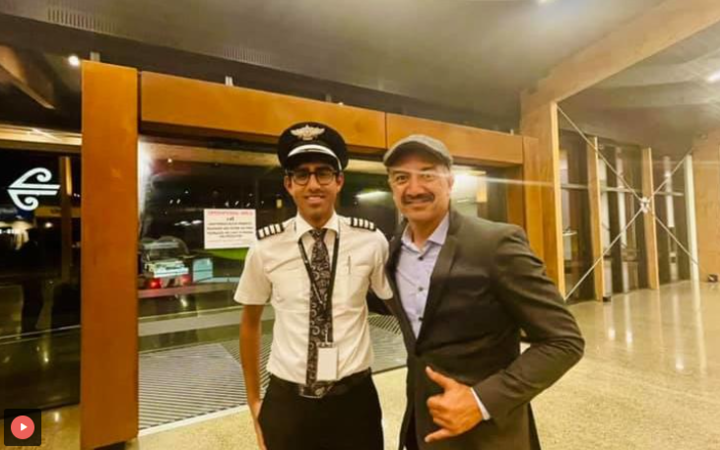 It's a journey he's made countless times before, but when Mātai Rangi Smith was flying from Gisborne to Wellington on Wednesday night he got a pleasant surprise.

Over the intercom the pilot welcomed the passengers on board in flawless te reo Māori.

Smith is a veteran Māori broadcaster and manager of Te Reo Irirangi O Turanganui a Kiwa - an iwi radio station based in Gisborne.

"I was absolutely flabbergasted, because this pilot, as he gave all the instructions and did the introduction, it was all in te reo Māori.

He assumed the pilot must have been Māori.

"I thought wow, this is impressive, I'm absolutely in awe of whoever this pilot is, to give his instructions, his mihi, all in Māori. I was impressed.

"This is the first time I've heard such passion, such fluency in te reo Māori from a pilot."

As they got closer to Gisborne the pilot spoke again.

"His voice pops again to say, all in Māori: 'we're almost in Gisborne, the weather conditions there are a little bit of rain etc.' And I'm thinking this guy deserves big kudos and accolades because I've never experienced this before.

Once the flight landed, Smith made his way toward the cockpit so he could thank the pilot. He called out to him: "Te rawe hoki o te reo - your te reo Māori is beautiful".

"I was flabbergasted and in shock when I saw this small, young Indian man wearing glasses, as the pilot. And I would love to see my reaction - I was trying to hide my shock, but I couldn't because I was just in awe that this was not a Māori pilot, this was an Indian pilot."

Smith stayed to chat with Kiran Parbhu, a fourth generation Kiwi raised in Wellington, and posted about the encounter on his Facebook page. It garnered a massive response, with over 13,000 likes.

Parbhu started learning te reo at intermediate school and carried on teaching himself throughout university. The 30-year-old always follows his te reo announcement over the PA with an English translation, and says when it comes to te reo he still has lots to learn.

"It is really nice, and more than for me I think it's really good for ... trying to make people comfortable and speak to them in their language, so that when people hop on an aeroplane with me they feel comfortable.

"I don't get to interact with people as a pilot much, so it's just trying to build that connection in that short space of time that we have, on a PA."

Parbhu is passionate about normalising the use of te reo in everyday situations, and he makes the announcements in te reo at least once a day, "and usually more".

"You do get more reception to it when you come to places like Gisborne or Rotorua or into Hamilton, but I use it all round the country."

He said he never expected people to be so impressed.

"My phone started going off with people sending me this post. I never anticipated that it would have so much reach.

"I don't necessarily like the attention, but it's great to be able to share te reo and to try and be a role model for people to use te reo Māori in their everyday lives, and to be part of normalising it."