How does a school with the population of Eketāhuna, in Lower Hutt's wealthiest suburb, end up discombobulated by rotting classrooms? 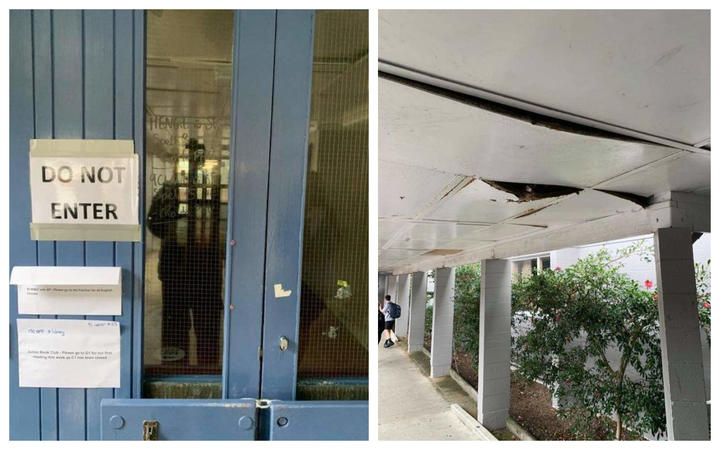 "I have been let down," she said at a meeting in the school hall earlier this month which families called to seek answers from the Ministry of Education.

Lucy had just spent the first three days of term two working from home because her classrooms are a health risk.

"Help has come too late. It is horrendously overdue," she added.

Hutt Valley High's problems are national news. Labour MP Ginny Andersen of Hutt South is using it as an example of "chronic" underfunding of schools. This is made worse, others say, by a property funding model that confuses the responsibilities of tenants (school boards) and owner (the ministry).

Education Ministry officials are promising to put things right at Hutt Valley High and they're also promising to look into how it went wrong.

Board minutes, emails and reports released to RNZ by the school under the Official Information Act show that time was ticking while rooms rotted.

They show the ministry agreed to work that did not happen. The school appealed repeatedly for help and, at the same time, officials praised it for being well maintained and "in good shape".

In 2016, a fire shut down the technology block and exposed the whole fire alarm system as jumbled and risky. It took four years to sign a contract to fix it. The school faced having to pay $300,000-500,000 itself, but eventually the ministry covered the cost. Only in late 2020 did the burnt-out tech block rebuild get back on track, and only after the school took drastic action to plug a $2.2m funding gap.

That same year, it was agreed to rebuild C block and a master redevelopment plan was finished. The block remains central to the black mould crisis. The ministry in May 2021 promised to replace it and a told parents a master plan is "desirable" and began looking at it again.

In 2019, a roofing report initiated by the school said a dozen roofs needed $6m to fix. Property funding was fully taken up already, and the school did not get the special roof funding it thought was coming.

Over the next few years the roll is forecast to grow 10 percent or so to 17-1800, without increasing the 80 teaching spaces.

A few weeks ago, the ministry told Hutt High families:

"Planning for the future at the school is in its early stages."