Warning: Some people may find aspects of this story distressing

The Eating Disorder Association is furious about comments from a mental health specialist who said patients sometimes adapt to their disorder over time, labelling it "dangerous". 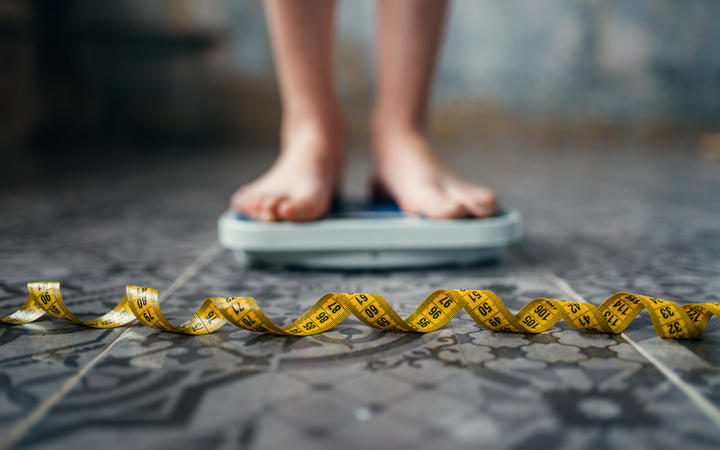 Canterbury District Health Board's general manager of specialist mental health Greg Hamilton told RNZ in April people with eating disorders "sometimes adapt to it over time", and are discharged if extensive treatment doesn't work for them.

Eating Disorder Association (EDANZ) chairperson Nicki Wilson had one thing to say about that.

"Rubbish! We don't do that with any other illness."

Treatment has moved on extensively in recent years, and the public system cannot simply put people in the too hard basket, she said.

"To consider it is something that people adapt to and learn to live with is very out of date and frankly, dangerous thinking. Recovery is possible at any age and any stage."

Since that story, more people with severe anorexia have come forward to say they can't access treatment in other parts of the country.

Wairarapa woman Megan hasn't been under public care for anorexia since 2014, despite multiple referrals since then.

The 34 year old is undergoing life-saving intervention from private specialists and her parents for severe anorexia which began after a sexual assault at the age of 18.

She deteriorated quickly, to the point where she was not having liquids.

Megan said last time she called the Central Region Eating Disorder service no one called her back.

She's been forced to move from her own place to live with her parents, to ensure she eats.

"Before I came home, I didn't want to live. I think for the first time I really thought I can see why this [suicide] happens. You're so stuck and so unwell but you kind of feel there's nowhere to turn."

A 2019 study published in BMC Medicine, of 36,000 people from the US with a history of eating disorders, found 25 percent had attempted suicide.

Calls to the EDANZ's helpline have more than doubled in the past 18 months.

"I think we need probably three times the current resource to be able to adequately cope with the demand. There are a large number of people becoming very unwell in New Zealand and they are not at the moment receiving the care and the treatment they need and they deserve.

"We hear from many families whose loved ones are discharged from treatment and while medically stable are still very unwell, with no treatment being provided for weeks or even months."

Dr Cushla McKinney, who lives in Dunedin, had multiple hospital admissions in New Zealand in her 20s and specialists had told her she would never recover.

At the age of 28, she checked into the Johns Hopkins Eating Disorders Programme in Baltimore, United States, under a compulsory treatment order.

McKinney spent more than a decade before that admission gravely unwell with anorexia.

"My liver was failing, I was close to being psychotic. And I think I probably wouldn't have lasted much longer than a week more before my body shut down."

After six months in Baltimore - treatment she funded herself - she began to get better. Now she is in her 40s, she has a family, a good job, and a hopeful outlook.

She maintains public services are too quick to diagnose patients with severe and enduring anorexia - known as SEAN - and write people off as hopeless cases.

"One of the things that worries me about a diagnosis like 'severe and enduring' is the idea that people might be denied services because they will be deemed untreatable. And it essentially robs you of hope.

"Not only is anorexia a nightmare to be in the grips of, treatment can be emotionally and physically traumatic, particularly in the early stages, and managing your way through this requires hope and belief in something better afterwards. Even if a diagnosis of SEAN does not preclude access to treatment, it can increase the likelihood of the patient refusing to accept it."

McKinney said it took years of hard work and determination, but she was now living proof her old doctors were wrong.

"Don't give up hope. Keep fighting, because there is still light out there."

The 22-year-old Christchurch woman RNZ spoke to last month is in hospital, but she's much stronger, her mother said.

The South Island Eating Disorder Service has told the family it wants to offer Susan a bed, but all its beds are full, she said.