A support group for people who choose to leave the Gloriavale Christian Community on the West Coast is relieved by the latest action by police and Oranga Tamariki. 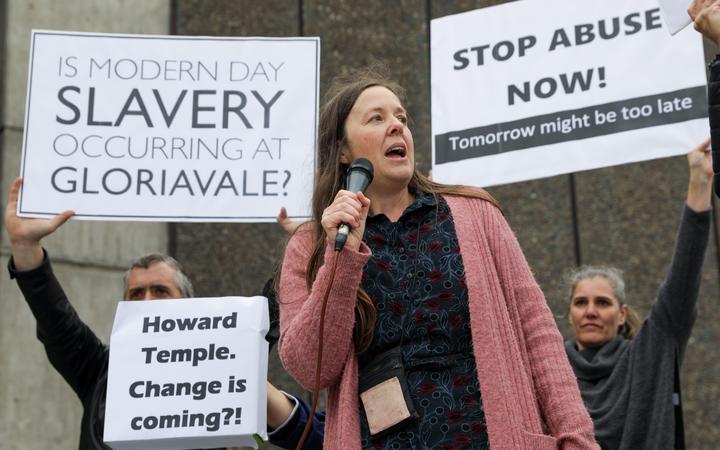 The two agencies have been at the West Coast community since Monday, as part of an investigation into the group.

The community has been the subject of allegations of sexual abuse and abusing workers' rights.

A former Gloriavale member also said she and her family have been threatened, since police and Oranga Tamariki arrived.

Isabella Harrison, who left the community in 2019, was not fazed by the threat.

"We received a threat this morning on the telephone that if we didn't stop telling the police and telling the government and courts what was happening that they would try and hurt us," she said.

"And when someone who has been in fear turns around and isn't afraid any more, I think you better really watch out for that person because they're going to be twice as courageous."

Harrison said she was happy to hear about the investigations.

Oranga Tamariki deputy chief executive Alison McDonald said its staff were working with police to ensure the safety of children and young people there.

Gloriavale Leavers' Support Trust manager Liz Gregory told Morning Report she had heard that up to 100 girls aged between six and 15 were being interviewed at present.

Police and Oranga Tamarariki had also been investigating claims of abuse of boys at the community for some time, she said.

Gregory said there was "a culture of control" and a lack of information within the community and children were not safe.

"[There are] great parents up there who actually would love to parent their children and protect them from harm, but they're stuck in a system and it prevents them from doing that."

She said she felt sorry for the children and some parents would be in a state of turmoil, unable to act on the concerns they had held for some time.

"They're in a system where they couldn't complain, they couldn't speak out. They couldn't just get a telephone and ring the police - that wasn't the culture and they didn't have access to the phone."

Gregory said they supported actions that help families which may include uncovering or exposing things "that are wrong in there".

"We know it's a really complex situation to be working in the Gloriavale sphere - it does need extremely careful handling."

Her group would not favour dramatic action, such as dawn raids, to remove children from their parents.

"We've tried to blow the whistle for want of a better word. So I guess for us it's a sense of relief that a government agency is understanding the issue."

There needed to be openness and exposure so that people could heal and move on with their lives, Gregory said.

"It would be amazing to have a period of disruption for people to create change and just move forward."

'Terrible system of fear and control'

A former Gloriavale member, who did not want to be named, said in previous years government agencies had only carried out "surface level" investigations.

"It's good to see government departments are finally doing serious investigations that ex-members have been pushing for years."

The member said Gloriavale had a culture of silence and were told not to speak to authorities.

Courage said she was the mother of "10 amazing kids" and one of the concerns she and her husband David had was Gloriavale's attitude around the issues of sexual abuse.

"Victims are taught to minimise their own abuse. They are pressurised and encouraged to not tell. It's a terrible system of fear and control," she said.

Courage said she prayed and hoped for "complete and healing honesty" when she lived there.

"And that is still my prayer for Gloriavale today. Honesty about their system, healing and justice for the victims, help and support for the perpetrators, lawful processes [and] accountability for the leaders that hide and cover up the abuse."