A coroner has found a computer tablet was stuck in a "dangerous" place in the windscreen of a truck that hit and killed a woman in Auckland. 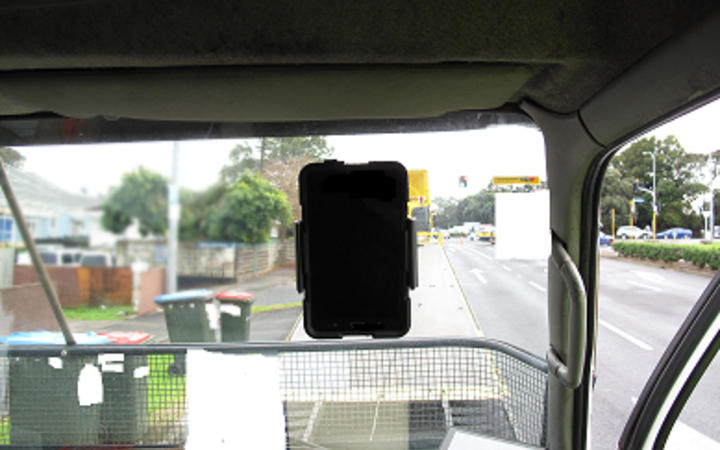 The A4-sized tablet stuck on the windscreen directly in front of the driver seat. Photo: Supplied / Ministry of Justice

Valerie Stewart, 74, of Mt Albert, was using a walker, when she was struck and killed by the small truck on St Luke's Road in June 2018.

A photo released by the Ministry of Justice shows the A4-sized tablet stuck on the windscreen directly in front of the driver's seat.

Coroner Heather McKenzie said the tablet, which had delivery details on it, was an impediment to driver Johnathon Thompson's vision and concentration.

"An electronic tablet was attached to the inside of the truck's windscreen more or less directly in front of Mr Thompson, at head height, and within his critical vision area" McKenzie's findings said.

It formed a "gross obstruction to the driver's clear view ahead", she said.

The tablet contained information for the day's deliveries.

McKenzie recommended police, WorkSafe, and New Zealand Transport Agency - Waka Kotahi - undertake a joint safety campaign about the use of devices by drivers.

"Drawing greater public attention to the issue will reduce the chances of further deaths occurring in similar circumstances."

Witnesses reported Stewart tried to cross where there was a lot of traffic in a 50kmh zone.

One said "Ms Stewart and the truck appeared to be travelling towards each other oblivious to the other's existence", the coroner said.

There was no evidence the truck was speeding.

Thompson told police "I was just driving. I had my eyes on the road and then all of a sudden I saw her out of the corner of my eye". McKenzie said.

"I slammed on the brakes then the truck skidded and I ended up hitting her on the driver's side of my truck," Thompson had said.

Thompson pleaded guilty and was convicted in August 2019 of one charge of careless driving causing death. He was sentenced to three months' imprisonment and disqualified from driving for fifteen months.

The delivery company, Kamush Freight Limited, told the inquest it provided tablets to drivers "however ,the placement ... is left [to] the discretion of the drivers".

The police crash report said the positioning of the tablet "made the vehicle unsafe to operate".

A tablet could be stuck in a windscreen so long as it did not obscure the driver's view, police said.

They also said the road rule on mobile phones only applied to devices that could be used as phones.

McKenzie said Waka Kotahi reported almost a third of drivers surveyed had said they would text or message someone while driving.

"There are no comparable statistics for the use of tablets and similar devices, despite being commonly used in delivery trucks, courier vans, and recovery vehicles (tow trucks), or as GPS navigation aids."

The Road Transport Forum said distraction was a big contributor to accidents.

"We take on board what the coroner has said, and we will continue to work with government agencies to raise awareness about the use of tablets and similar devices truck drivers use for work purposes. It takes a sustained period of education to change behaviour and we are on board for that."