A 103-year-old time capsule has been discovered by construction workers involved in the redevelopment of the Sarjeant Gallery in Whanganui. 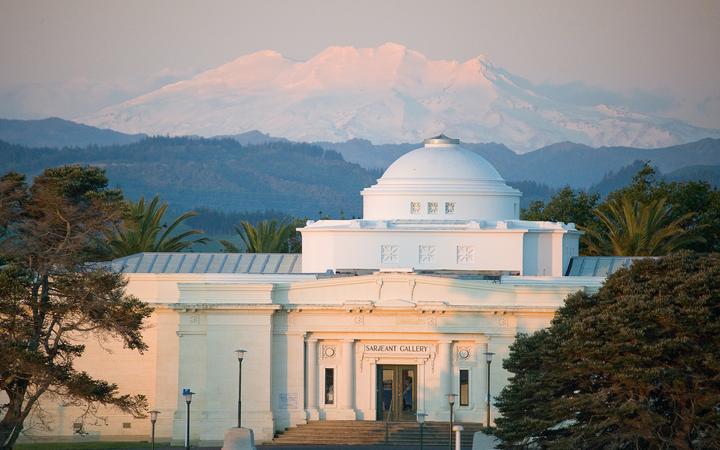 Sargeant Gallery is one of New Zealand's most iconic and best-known heritage buildings. Photo: Supplied

The contents give a fascinating historical window into the time of World War I, as well as resurrecting an old controversy of who really designed the building.

Originally constructed between 1917-1919 the Sarjeant Gallery at Pukenamu Queen's Park is one of New Zealand's most iconic and best-known heritage buildings.

The redevelopment is the largest arts development in the lower North Island since Te Papa. It will give the region an earthquake strengthened heritage gallery with a new state-of-the-art modern wing.

The new gallery is scheduled to reopen in 2023, capable of showcasing national and international exhibitions. It will also house the nationally-significant Sarjeant collection of over 8300 works of New Zealand and international art.

As part of the earthquake strengthening of the old building, 20-metre long drill bits are currently drilling long vertical holes into the walls of the original gallery building for steel rods. Earlier this month, workmen on the roof realised the drill had hit a void and immediately stopped drilling. They traced the depth of the drill bit, made a hole in the interior wall and reached inside.

A time capsule was removed, and although the drill had broken the glass vessel, the contents - letters, pictures, papers from 1917 and 1918 - were in perfect condition.

The capsule was stowed there by the Clerk of Works on the original construction project.

In a very personal letter dated 28 January 1918, John Cornfoot Brodie said the world was in the "Fourth year of the Great War".

Brodie wonders when his letter will be found, and states perhaps the primary purpose of the message in a bottle - that the name of the true architect of the Sarjeant Gallery should one day be corrected.

"In very recent years, the subject has been discussed - but we can see now it was very much an issue at the time of the construction too.

"The fact is - that the design of the Sarjeant Gallery was arrived at by a competition and this was won by a design from the office of Edmund Anscombe of Dunedin.

"Anscombe was not the architect. Yet Anscombe claimed the title despite strong questioning.

"The architect was in fact entirely the work of a talented 21-year-old clerk called Donald Hosie who worked in Anscombe's office."

She said many were suspicious at the time that the design was not Anscombe's and that a moderator of the competition, S Hurst Seger, concluded that to be the case.

Anscombe was however credited on the foundation stone.

"This injustice was made all the more raw when Donald Hosie was drafted to fight in Europe in 1917 and died on the battle field at Passchendaele on 12 October 1917 just three weeks after the Sarjeant's foundation stone bearing Anscombe's name was laid," the Gallery said.

Brodie makes clear in his unearthed letter that Hosie should have all the honour and that the claimant of the design was "no gentleman".

Arthur told RNZ that gallery wouldn't consider touching or revising the foundation stone, as it was a historical artifact, but that the gallery had plans to acknowledge Hosie.

"There are many creative ways we can do so, maybe name a room after him. We definitely intend to commemorate him in some way," she said.

Brodie's letter also expresses love for his son Henry, overseas fighting in the World War I. A letter from Henry is included in the capsule. Henry survived and returned home to New Zealand where he practised as a solicitor in Nelson.

Brodie's another son, Archibald Douglas Brodie, was a barrister & solicitor and one time partner in the current Whanganui law firm Treadwell Gordon. Coincidentally Archibald Brodie is the father of the last artist to be exhibited at the Sarjeant Gallery, Joan Grehan, before it closed due to safety issues in 2014. The art peice was placed meters from the time capsule her grandfather hid in the wall, the gallery said.