First Person - New Zealand's best teenage rugby players got together this month to play in the Super Rugby Aotearoa under-20 competition in Taupō.

In the opening game of the tournament the Hurricanes and the Chiefs continued their long standing rivalry, but it was a battle within the battle which had people talking: Hurricanes under-20 hooker Ben Strang coming face to face with his younger cousin, Chiefs under-20 halfback and namesake Ben Strang.

Naturally I, RNZ reporter Ben Strang, needed to get to the bottom of this story. 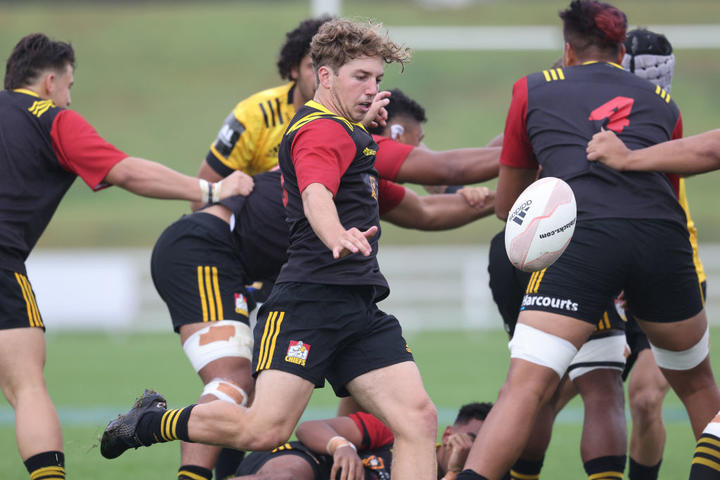 Chiefs under 20 halfback Ben Strang during the Super Rugby Aotearoa under 20 competition match with the Hurricanes Rugby Club under 20s on 11 April in Taupō. Photo: 2021 Getty Images

Strang is not a common surname.

It is not Smith or Brown, or Singh. It barely merits a mention in your local phonebook.

Originally, only a couple of Strang families moved to New Zealand from Great Britain, so Strang stocks are fairly low in Aotearoa.

Because of that, usually, as a Strang, you go about your business being the one and only, or so you think, especially in a small country like New Zealand.

But as the saying goes, things come in threes.

There are now a pair of Ben Strang's making strides in rugby in New Zealand, and they are thriving on the fact they are doing it at the same time.

"It's pretty cool eh, to be honest," said Ben Strang, 19, the Hurricanes under 20s hooker who hails from Whanganui. 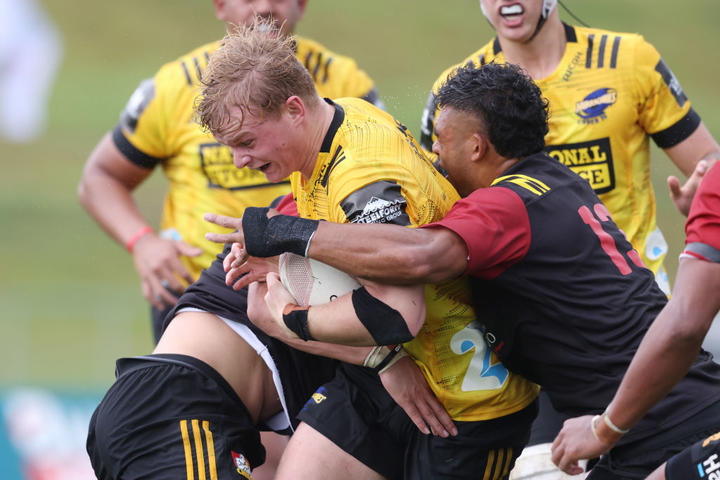 Ben Strang, the Hurricanes under 20 hooker during the 11 April game against the Chiefs Rugby Club Under 20s. Photo: 2021 Getty Images

"Like you don't really think about it, you're focusing on the rugby, but it's a pretty cool opportunity to play a cousin of the same name."

Strang, the hooker, is highly regarded in Manawatū where he is a contracted player with the Turbos NPC team and comes with some impressive pedigree, having played for the New Zealand schoolboys' team.

A product of Whanganui Collegiate, he was one of the few players in the Super Rugby under-20 competition to come from a Heartland region and not one of the big cities.

"I'll be honest, it's pretty challenging coming from a small area like Whanganui, but at the same time it's pretty cool," he said.

"It's certainly one of my drivers, to make it out of a small town. I love Whanganui and all the support they've given me so it's a huge part of my drive, but at the same time it's a real challenge."

It was while playing for Collegiate that Strang, of the Hurricanes region, got his first chance to play against his younger cousin from Chiefs country.

Ben Strang, the Chiefs under 20s halfback, was one of the youngest players in the Super Rugby Aotearoa under 20 competition this year, having only left St Paul's Collegiate in Hamilton last year.

He said the clashes with his cousin had become family gatherings.

"It's sort of the only time we get to catch up with that side of the family is at the rugby games, so it's nice for everyone to see everyone again. It's cool."

Strang, the halfback, said the move into the Chiefs under 20 set up came as something of a surprise, given his young age.

He was first named in the Chiefs under-18 side last year.

Due to my age and lack of rugby skill, I dropped out of that group chat, freeing up a spot for the halfback to regain his place, and go from strength to strength.

"I never really thought it was going to happen this quickly, I guess a bit of luck played into my hands," he said.

"I didn't think I'd boost up into this level quite this quick, but I'm taking it with open hands and really enjoying it."

In the head-to-head clashes, Ben Strang - the younger one - has had almost all the success thus far.

The halfback secured two wins in three with his St Paul's team when playing Whanganui Collegiate two years ago in the Central North Island competition, including in the tournament final.

And when the Chiefs and Hurricanes played earlier this month, the halfback was the winner again, with the Chiefs taking a decisive victory.

Ben Strang the hooker has had enough of losing.

"Obviously the Chiefs under-20 game, he ended up winning that one as well and he played bloody well to be honest, and my throwing wasn't too good in that game - a bit of a touchy subject - but yeah, they've been great battles over the years."

Both Ben Strangs hope to have many more battles over the years, and see how far rugby can take them.

For the older cousin, it is already proving a career option with a Manawatū contract in the bag.

For the younger Ben Strang, he is focused on impressing in Hamilton club rugby, with a career in rugby a dream.