One person is in a critical condition after the vehicle they were driving collided with a motorway barrier and rolled into a residential property near Ōtara in Auckland. 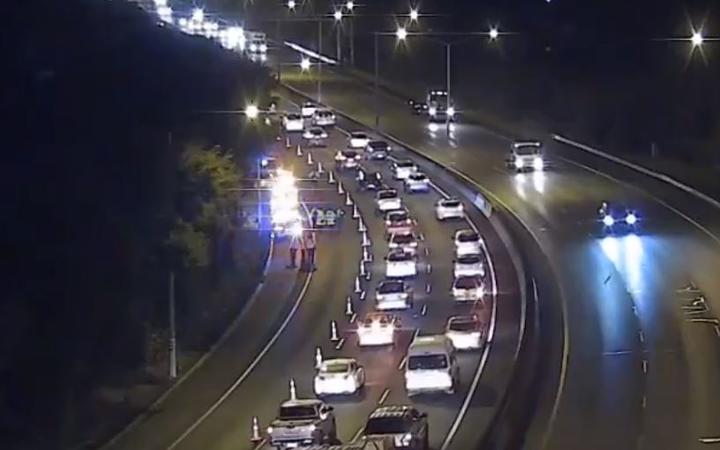 Traffic was backed up all the way to Drury. Photo: Twitter / NZTA

The crash happened just before 4am as the vehicle was heading north on the Southern Motorway.

Two people in the vehicle were taken to hospital.

One lane has been closed north of the Te Irirangi Drive on-ramp while the crash scene is examined and cleared.

NZTA says there are long delays heading north between Drury and Papatoetoe, and advises motorists to consider alternative routes.

SH1 SOUTHERN MWY - 6:15AM
Due to a serious crash, earlier this morning a northbound lane after the Te Irirangi Dr on-ramp is closed. There are LONG delays heading north between Drury & Papatoetoe. Consider an alternative route to work this morning or be prepared for delays. ^MF pic.twitter.com/PXXCXa9huj

There is also a multi-vehicle crash on the Southwestern Motorway.

Some lanes have been partially blocked thereby slowing down southbound motorists after the Dominion Rd off-ramp.

Delays are also expected on this route.

SH20 SOUTHWESTERN MWY - 6:30AM
A multi-vehicle crash, (partially blocking lanes) has slowed down southbound motorists after the Dominion Rd off-ramp. Pass the scene with care and expect some delays as Police work to CLEAR the incident. ^MF pic.twitter.com/zlVSE8i0KD