The Royal New Zealand Navy's newest and largest-ever ship HMNZS Aotearoa has made its first visit to its ceremonial home port in New Plymouth today. 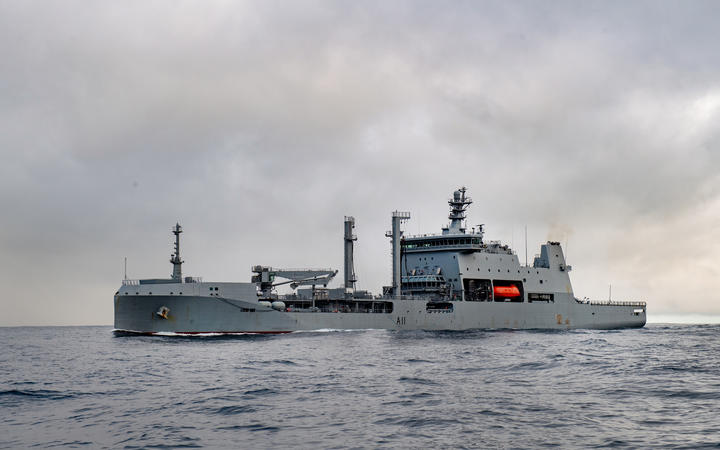 The $450 million supply ship came into service last year and at 173m long it can carry 10.5 million litres of fuel - or enough to 'top up' a frigate almost 14 times.

It steamed into Port Taranaki this morning.

The trip out to Aotearoa did not have an auspicious beginning with Able Seaman Leon Cooper issuing a rather chilling safety briefing to a the crew of journalists heading out to HMNZS Aotearoa on a ridged hulled inflatable (RHIB).

"In the event of an emergency if anybody goes over the side and you are the person that goes over, stay. Please remain where you are. We will manoeuvre the boat to come and pick you up. Don't try and swim to us," he said.

New Plymouth was 'home' to the HMNZS Aotearoa's predecessor the HMNZS Endeavour, another supply ship which was decommissioned in 2017.

Cooper said he thought it was great for the crew to be able to bring the ship to Taranaki.

"And deliver Aotearoa to her home port, and I mean we've only got one sailor onboard from down here but for him it's very special to come back and see his family and friends." 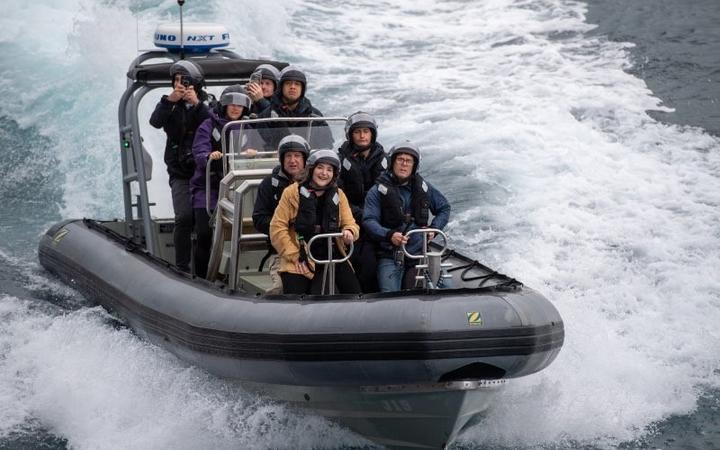 A media team on their way out to HMNZS Aotearoa. Photo: New Zealand Defence Force

The 20-minute journey out to Aotearoa was a bone-rattling one, with visitors then hauled onboard via a hoist.

"So she's a ship designed to support other ships at sea, but has some increased capabilities including the fact that we can go into the ice as well as refuelling ships under way and carry a signifcant amount of containerised and palleted cargo as well.

"It's designed to support ours or our allies' ships at sea in terms of a task group - so that's a bunch of naval ships - we would be the logistics hub at the centre of that task group."

Rooke was pleased at how the ship was bedding in. 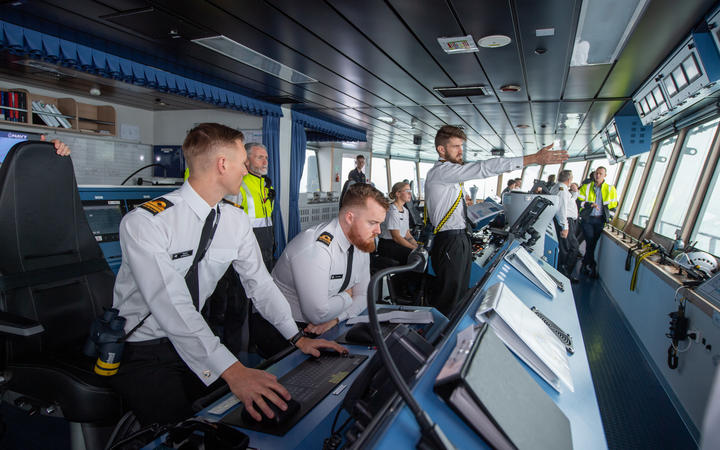 "She's just an incredibly good sea-keeping ship. We've done replenishing activities - that's passing fuel from on ship to another while we are under way - we've done that over in Australia and it went really well and I think everybody is excited about doing more of that.

"But also the fact that we can go down to McMurdo and Scott Base in the summer time."

The Aotearoa, which has a core crew of about 60, can also accommodate an NH90 helicopter and has room for 24 shipping containers on its deck.

The 26,000-tonne vessel also has freshwater generation plant, which can produce 100,000 litres of drinking water a day.

Junior rating Steven Wereta is the crew member from Taranaki - a proud Ngāti Ruanui iwi member who was looking to showing his mates around the province.

"Just to be able to show my ship's company how awesome Taranaki is and how beautiful each location is. Going to each town, every place has its little spot but I'm still biased though - I love Hawera," he said.

"Hawera is honestly so amazing and being able to go home for Anzac Day is a real privilege."

He joined the Navy at 17 and said he had no regrets. 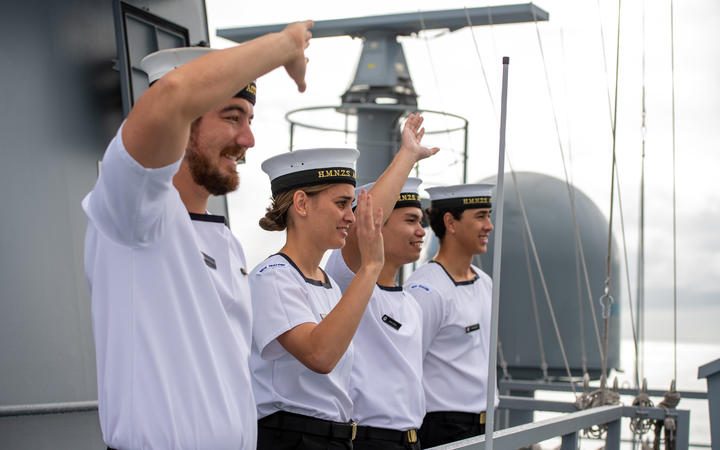 "I've been very blessed and very lucky. This is my first ship. I joined it in June when the ship first came in and it's been an amazing experience so far and I'm just so blessed to be on here."

On Friday, crew from HMNZS Aotearoa will take part in a Charter Parade through New Plymouth.

"So when a ship is affiliated with a city ... the Charter on the ship, which basically allows the ship to call on the city, conduct a parade with a band playing and bayonets fixed. It's basically showing support for the city and the city's support for the ship."

A group of New Plymouth youngsters halfway through the recruitment process were also onboard, and 17-year-old Esther Cocker said they also enjoyed the RHIB experience.

"Yeah we got out here on one of the RHIBs. It was pretty fun. It's really fast, it's really cool and you catch a bit of air on the way out as well. I thought it was like horse riding."

HMNZS Aotearoa will be officially welcomed at a pōwhiri from Ngāti Te Whiti at Puke Ariki.

On Saturday the ship will host an open day where thousands of locals are expected to visit the vessel, while on Anzac Day crew members will disperse to attend Dawn Services around Taranaki.