A life-changing device that many Type 1 diabetics cannot afford is being handed out as a weight management tool by a wellness retreat. 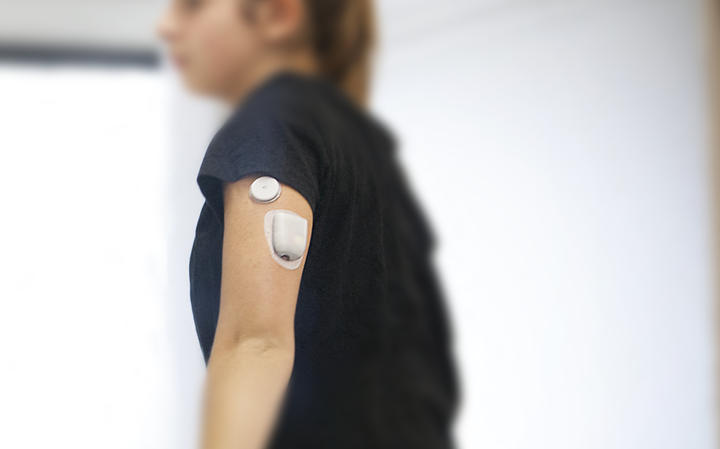 Pharmac has repeatedly been called on to fund the device for those who can not afford it but has not budged on the issue.

At Aro Hā retreat, customers leave with a CGM to take home and track their diet.

It removes the need for them to test their glucose levels by pricking their finger several times a day.

"So it takes the readings from a sensor so that you wear with filament that sits under [the] skin and then a transmitter on the back send data to a receiver - either an insulin pump or your phone - every five minutes."

It is a round disk a little bigger than a $2 coin placed on a person's arm and means the wearer can check their glucose levels at any time of the day with the use of an app - and without the pain of a prick.

The retreat has been using the CGM devices for the last few years. It is available to visitors for another $200 on top of the $5000 to $7000 for their stay.

Aro Hā co-founder Damian Chaparro said: "It's quite cool because you can do a retreat, observe how your blood sugar behaves under ... ideal diet and exercise routines, and then you leave here and eat whatever and drink whatever you drink, there's some really good data."

Single mother of two Jess Barton, who could not afford one for her daughter Lily, relied on the kindness of friends to fund it.

"So she absolutely loves the Libra, and we've had it now for just over two and a half years and basically the first two years has been funded by two different friends and family for us."

Lily, who has had diabetes for a decade, is now at high school and the device is her saving grace, but it is not even a full CGM.

They have bought parts over time to create something similar - using an extension that allowed Barton to look at Lily's levels on her phone.

"It's $50 a week to run alone. The Dexcom on top of that I think is even double the price of what we are doing at the moment that we can't even quite fully afford. Yeah, it's just crazy how we wouldn't have even been able to do it without the help of our friends and family."

Sianne Chapman has had Type 1 diabetes for more than 20 years but after separating from her husband, she could not afford the device.

She was using an outdated version to cut costs but supply was running out as new technology takes over.

"So I've got the option of stopping using it or having to pay $5000 a year - just isn't really in the budget as a single mum."

Type 1 diabetes has no cure and failing to manage it can lead to disability or death.

After 23 years of living with Type 1 diabetes, the device is keeping Chapman alive.

"My hypoglycemia awareness is pretty low, so without the CGM there's a strong possibility that I just won't wake up."

A Diabetes New Zealand petition with 28,000 signatures was submitted to Parliament two years ago calling for CGMs to be funded by Pharmac.

Pharmac officials were supposed to attend a select committee last March, but Diabetes New Zealand chief executive Heather Verry said a year later there was still no update or communication from Pharmac on when the new date might be.

Pharmac could not say either.

Pharmac director of Operations Lisa Williams said funding applications were considered by experts and then ranked against other existing requests.

These requests formed a big queue - and the devices were not at the front.

"What's happening is that we're focusing our attention on other new medicines, so we'll always have medicines that we'd want to fund.

"We're looking to fund them when we have money available."

That was despite the government giving Pharmac a $200m boost over the next four years.

The devices are publicly funded in Australia, the UK and other countries.

Minister of Health Andrew Little declined to be interviewed but said in a statement he had not received any further advice from Pharmac.