Families of miners killed in the Pike River tragedy say they are heartbroken by news there will be no more government money to expand the project to recover their loved ones' bodies. 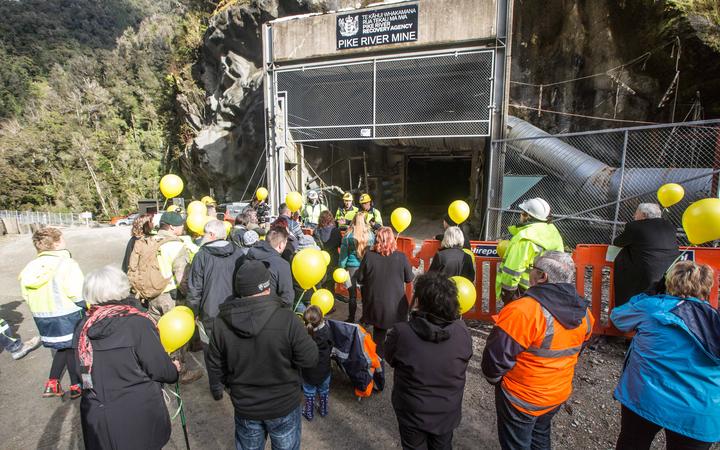 Families at the entrance to the mine for the re-entry in May 2019. Photo: Supplied / Pike River Recovery Agency

A group representing the families of 27 Pike River miners who died in the 2010 disaster have met with family members to discuss the final stages of the drift recovery project.

The families said they acknowledged it would be difficult to convince WorkSafe to give an exemption to allow engineering work to further enter the mine.

The Pike River Mine disaster on 19 November 2010 in on the West Coast resulted in the deaths of 29 miners whose bodies have never been recovered.

In a statement released this morning, the families said: "Families accept advice that going further would be a major, expensive engineering project, with complex potential safety risks, and it would be difficult to convince WorkSafe to give further exemption to mining licence."

"Families accept, with heartbreak, Andrew Little's advice that there will be no more government money to expand the project at this time.

"Families welcome advice that Police with support of the Agency, will drill additional boreholes to further their investigation of events underground that help them understand the disaster.

"Families remain hopeful that ongoing police investigation will continue to uncover important evidence, and if this happens, and further work would help achieve truth and justice, we will push further for it."

The families said their focus would be on helping make New Zealand a safer country.

"In order to honour our men and leave a legacy the families want the deaths of our men to continue to make New Zealanders safer. We will work with the Public Service Commission and other agencies to further this goal."

The families acknowledged the ongoing support the New Zealand public and the international community in their efforts.

'It's just a money pit really'

Sonya Rockhouse, who lost her son in the mine disaster, told Morning Report all the families desperately wanted to go further into the mine to get their loved ones but they realised: "Enough is enough".

She said costs had tripled - up to nearly $60 million - and nothing significant had so far been found as had been hoped.

Rockhouse said the government had delivered what the families asked - exploring the mine drift - and families knew it had to come to an end someday.

"It's just a money pit really, and like I said before - when do you stop? We have been fighting for a very long time.

"If one of us won Lotto tomorrow or someone miraculously dropped $40-$50 million in our lap - who knows?"

But she said there were other complications including needing a WorkSafe approval.

And a second exit would have to be built if the main mine workings were accessed which would be expensive.

Rockhouse said the families were optimistic there could still be prosecutions - and police have told them the odds were more likely than before the re-entry started.

"The police playing things very close to their chest, they have to [because] they don't want to prejudice any prosecutions and we don't want them to either, but it is certainly looking positive."