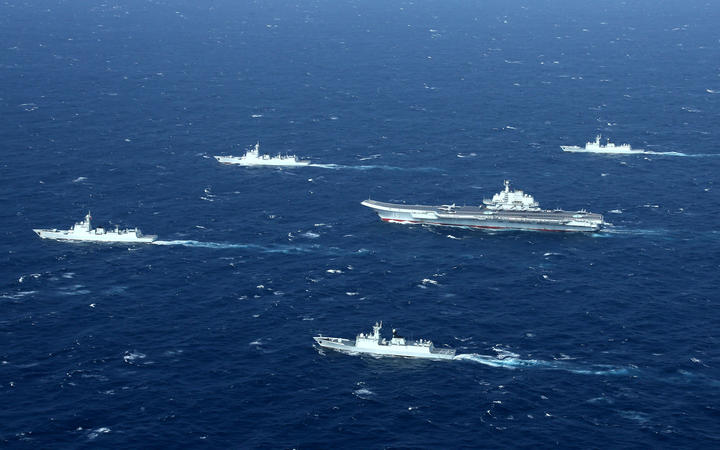 The two-day Asia Pacific Security Innovation Summit has attracted influential military, diplomatic and other officials from around the world to discuss to security.

The Covid-19 pandemic has not put a stop to the security threats faced in our region, Asia Pacific Security Innovation forum chair Dr Anita Abbott said.

She said there was a growing security risk in oceans, particularly in the South China Sea.

"Many players are arming themselves. What for? Is it for cooperation, competition or for shared interests? For example, securing the maritime from piracy or from terrorism, or is it for securing sea lanes for energy?"

Five years ago, an international court rejected China's claims of sovereignty over the majority of the water mass.

Sky Canopy Consulting founder Pamela Williamson said the conflict could not be ignored by Aotearoa.

"We are not so far away. Our supply chains are reliant on those trade routes being kept open through Asia to us. There is a real difficulty in assuming that because of our distance, we are somehow able to be immune or away from the global conflicts in that area," Williamson said.

Hattendorf Centre for Maritime Historical Research US Naval War College research fellow Hunter Stires said the US and its maritime partners - including Aotearoa - depended on access to the sea for security.

"So if China's successful in undoing the freedom of the sea and if they then are successful in shifting trade ashore to the continental trade quarters they're building in the interior of Eurasia to the Belt and Road, the United States and our maritime partners will be left on the outside," Stires said.

Last month, China introduced a new Coast Guard law that allows them to forcibly board non-compliant foreign vessels they claim are illegally engaged in economic activities in waters they claim. It allows them to use all means necessary, including force to stop foreigners found infringing on Chinese sovereignty.

Hunter Stires said it was designed to intimidate.

"They're basically trying to say that anything they claim is theirs - i.e. 90 percent of the South China Sea, which they have codified that - it's in their domestic laws that they have indisputable sovereignty over it. That is really what I think they are trying to hand tap at - not even hand tap, thats what they're basically saying, is 'we are prepared to use force against any foreign vessel, civilian or military'," Stires said.

Retired US Sergeant Major Anthony Spadaro said security in the Asia Pacific region needed to be on people's radar.

He wanted to see the public become more engaged with discussions about security and collaboration, saying it was damaging when these issues weren't talked about.

"Then we'll never grow, it's devolution. I see this hurting us when we start to close borders down, and that's my fear, is we shut down and we lose dialogue. We lose openness. We lose transference of ideas", he said.

Retired German Army Major General Gert-Johannes Hagemann said the world faced uncertain times, and 2021 would be a fork in the road.

"A critical junction. A time of risks, but also of opportunities when we reflect in 10 years time, it is likely that we will look for the origins of the crisis or 2020 and the decisions taken this year," he said.

Tomorrow the summit will focus on strategic thinking, leadership and strengthening security resilience through alliances.