How do officials in Wellington come to take a small farm off a struggling school in Taihape, when they said they wouldn't sell it if the children still used it? 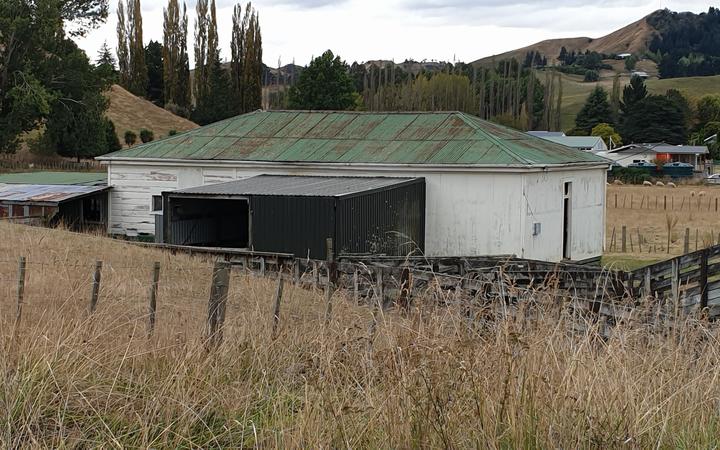 The local MP, and the former principal and school board chair, all say it amounts to the government stealing the farm from the town.

Taihape locals pitched in to buy and set up a 13-hectare farm for students 30 years ago.

But they didn't put the farm in a separate trust - a mistake that has, from then till now, curtailed investment and plans for the land.

Emails and documents released under the OIA show the Ministry of Education warned the board that transferring the farm to a trust "may be considered misappropriation of publicly-owned property and ... is likely to be unlawful".

That put a blunt end to the efforts of Marlene Harris, the college's board chair in 2004, to set up a trust.

It was a "threatening" letter, she said.

"The ministry never gave us the time of day."

But the officials did offer this reassurance: "The ministry has no reason to believe that the school farm will not be a community asset for as long as the community wishes to see it as part of its education facilities."

Ten years later, in 2014, the ministry sold the land, to another part of the government, and from there it was put into the Treaty settlements landbank.

'We were unaware' - Education Ministry

The farm is now leased by Taihape Area School.

The principal for a decade, until early 2020, Richard McMillan, said the lease arrangement put them off investing in it in the way they wanted to.

"The farm was a crucial resource for our school," he said.

The ministry told Education Minister Chris Hipkins in 2017 that it would never have sold the farm if it had known it was still being used.

"Unfortunately, there had been no formal 'reassignment' of the property following the closure of Taihape College, and we were unaware that the Area School was using it for educational delivery," it said in a briefing.

"Had this been understood prior to 2014, the land would not have been placed in disposal."

The briefing was signed by the current head of the ministry's education infrastructure service, Kim Shannon, who had delegated authority to dispose of the farm.

Richard McMillan said he never got a call from Kim Shannon or any other official prior to 2014 to check if his school was using the farm.

Dave Randell, the principal who set up the farm in 1989, was not surprised at the ministry's dealings with McMillan.

"All they had to do was ask, it was as simple as that," Randell said.

In fact, email records show the ministry's focus in 2014 was not on whether students were using the farm, but on paperwork.

Finding the ownership papers "is the only way in which there is any chance of preventing the disposal process for the land being progressed", an official told the school.

"I'm happy to do what I can to assist you in this, but without documented evidence to support the school's claim to ownership, there really is little that can be done," they added.

The fact the farm had not been protected within a trust in 2004-5, seemed to have been forgotten by all sides.

Read more: Ministry of Education documents on the school farm

McMillan and his school board were still fighting for the farm to be returned to school ownership up to 2020, when he retired.

"To be honest, it does feel a bit like it's been stolen," he said.

'We were never actually informed by the ministry directly that the farm had gone into [the] landbank.

"We found out when we were making enquiries with them about something else."

The farm was "a prickly pear in the consolidation" of assets, said Abie Swart, now in South Africa, the last principal of college and the founding principal of the Taihape Area School.

"The MoE cannot and has never proved that the farm belonged to them," Swart said.

The land was first offered back to its original owners, as ministry processes dictate. But the farmer who had sold it cheaply to the school in 1989, Jim Cherry, had died, and his daughter-in-law Jean Cherry told RNZ that by that stage, 25 years later, the family decided they did not have a use for the land.

Most Taihape people did not have a problem with how the farm had passed to the government, and was on a lease till 2027, according to the area school's new principal Craig Dredge. 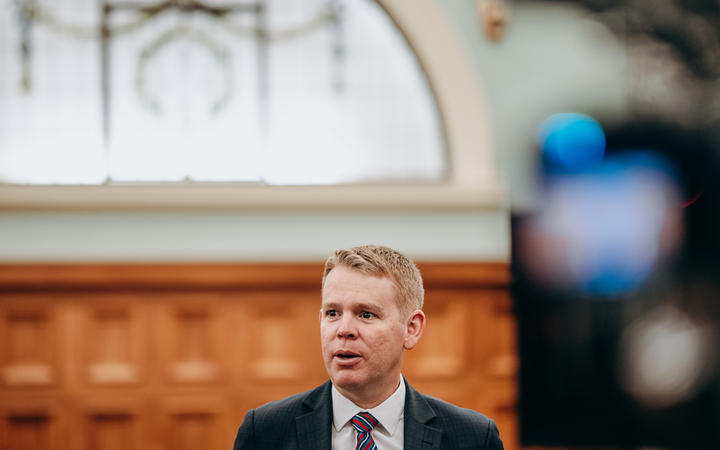 But Swart did not agree.

"The community members were vocal about this issue when they heard about the intention to sell, as it never belonged to the MoE," he said.

This was echoed by Andy Law, the former chair and long-time school board member till late 2020, who headed the appeal to the Ombudsman.

"A large section of the community are very upset about the loss of the farm, so how can you say everyone is happy with the 'direction of the waka' [as Dredge had said]?" Law asked.

"If the farm is not returned, we may well lose access altogether and at best will be paying rent instead of making a profit to use within the school.

"How is that good for the school?"

If iwi ultimately got the land, it would not be fair on them to lease it to the school for under market rates, Law said.

What politicians had to say

The briefing to Hipkins in 2017 was triggered by Rangitikei National MP Ian McKelvie, who had raised the farm ownership problem with Hipkins and Speaker of the House, Trevor Mallard.

"I've been in meetings with about three education ministers [or associate ministers] over this issue," McKelvie said.

"I've also been involved in meetings with the current Speaker of the House, who was the minister at the time this transaction took place, and fully understood this piece of land belonged to the community.

"He [Mallard] undertook to try and resolve this situation three years ago, and obviously hasn't been able to."

Mallard's office told RNZ: "The only comment the Speaker would make is to note that attempts go back five-plus years."

Mallard agreed that the school owned the farm.

The ministry, in its 2017 briefing after McKelvie's intervention, said: "Now that the land is no longer owned by the ministry, we have taken all possible steps to ensure no interruption to the school's educational activities" by setting up a lease.

The school may yet win an investigation by the Ombudsman.

The Ombudsman's decision would decide the next step, said the ministry, which won't comment on if the school could be compensated.

Jean Cherry thinks compensation is due.

"That school is in dire straits, in need of money for the rebuild.

"If they could get back this parcel of land, that could go into the college kitty," she said.

The Crown put together a proposal to take the farm out of the Treaty landbank, but this failed.

District councillor Tracey Hiroa was on the school board for nine years till 2018, and works for Mokai Patea Services.

She cannot speak for the Mokai Patea Waitangi Claims Trust, but said the long-running angst over the farm was not due to iwi.

"Quite frankly, the ministry was putting iwi in the middle of a conversation that iwi had no control of," she said.

"It should not have been put in that situation. 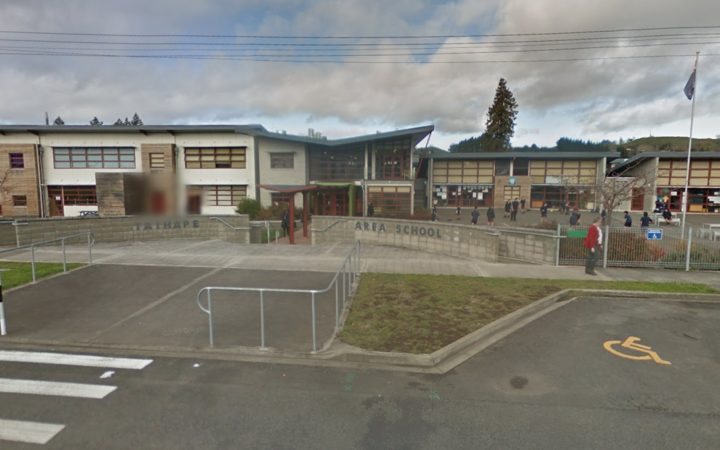 Taihape Area School has been in need of renovation work. Photo: Google Maps

"The community's getting blamed and iwi getting thrown in the middle of something as if it's their fault when in reality they had no say in it. The reality is the iwi owns nothing."

The farm is landbanked with Land Information New Zealand, in an area where Treaty settlement negotiations had yet to begin.

It could only be released with Cabinet approval, said the new Crown agency, Te Arawhiti.

The Education Ministry told Hipkins in 2017 that once the Mōkai Pātea claim was settled, "we will be able to put in place a long-term solution for the school and wider network".

In 2021, that is not in sight. The ministry had offered financial help to maintain the farm but the school had yet to take up the offer, it said.

Ann Abernethy taught students on the college farm for years, and now heads the Taihape community board.

The farm's fate had not come up at the board, but she said she was happy to raise it.

"I am sure the town does care about the farm, it cares very much about education as a whole here," Abernethy said. 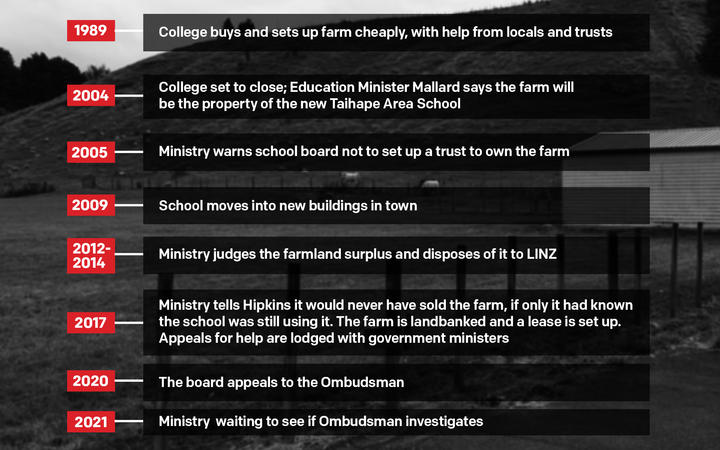 - This was the second of a two-part report. Read part one here