Development of wahi tapu land on Whakatane's coast could be stalled by iwi occupation after commissioners consented to a 240-section housing subdivision and retirement village next to an ancient urupa. 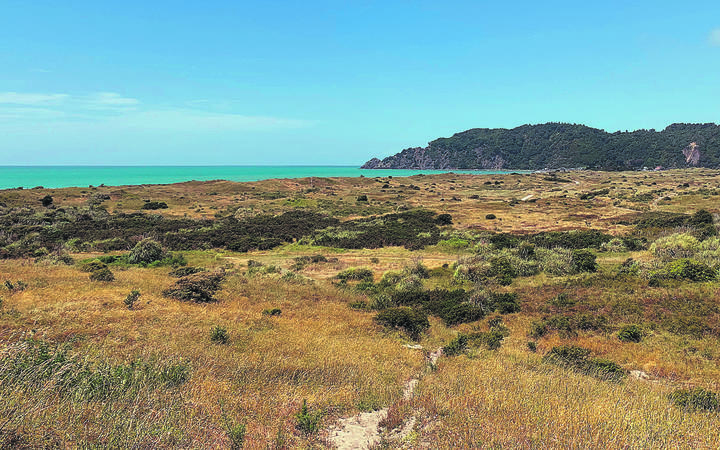 Iwi have been fighting to stop a resource consent to turn this land in Whakatane, which is wahi tapu, into a suburb featuring a retirement village. Photo: CHARLOTTE JONES / LDR

Kaitiaki of the Opihi Whanaungakore urupa, Rapata Kopae, said urupa trustees were considering how to stop the development including court action, a public information campaign or occupation of the land.

Kopae said rangatahi of multiple tribes were seriously considering occupation but were waiting to see how things played out first.

The commissioners' decision came hours before a large earthquake rocked the Kermadec Islands, prompting a tsunami warning on New Zealand's east coast last Friday and evacuation of the surrounding neighbourhoods of the site at Whakatane.

Kopae called the events his tipuna making clear their displeasure in the commissioners' decision.

"They may have got the resource consent, but our tipuna sent a warning like nobody's business," he said.

"Who wants to build an old people's home right next to a place we just had to desert?"

The land has been earmarked for subdivision since the 1970s and was sold to developers by the Whakatane District Council in 2017 for nearly $8 million following Environment Court hearings against the subdivision in 2016.

The Environment Court endorsed the Opihi Structure Plan, which sets aside over a quarter of the land for landscape reserves and a 25-metre buffer to protect the cultural and spiritual values of the urupa.

The developer will have to manage this buffer, including planting native trees, constructing a fence and pest control for several years.

The urupa is of intense cultural value to iwi affiliated to the Mataatua waka. It is where some of the original founders of Whakatane including the captain of the waka, Toroa, his daughter, Wairaka, and grandmother Muriwai are buried.

It is still in use today.

Te Runanga o Ngati Awa chief executive Leonie Simpson also said the iwi would consider what to do next.

"We are obviously disappointed in the decision but will now take time to consider options," she said.

In a statement posted to the Whakatane District Council website, Mayor Judy Turner said the council was acutely aware of the cultural significance of the land and river to tangata whenua.

"Considerable efforts have gone into developing management plans that appropriately respond to the protection of cultural and spiritual values," she said.

"However, I acknowledge the outcome will still be challenging for some."

Turner said council had a role to respond to further projected population growth and the increased demand for housing.

"This, combined with our geographical constraints, means council needs to carefully consider how we unlock more housing given our current housing crisis to ensure we have homes for all," she said.

"We know that there is work for us to do with tangata whenua, as we move forward together. At the same time, learning from this process to ensure we are sensitive to our environment and sense of place."

The developer of the land could not be reached for comment for this story.