A man who jumped onto the Trentham Racecourse in the middle of a race on Wellington Cup Day has been sentenced to 100 hours community work, one year supervision and ordered to pay $8880 in reparations. 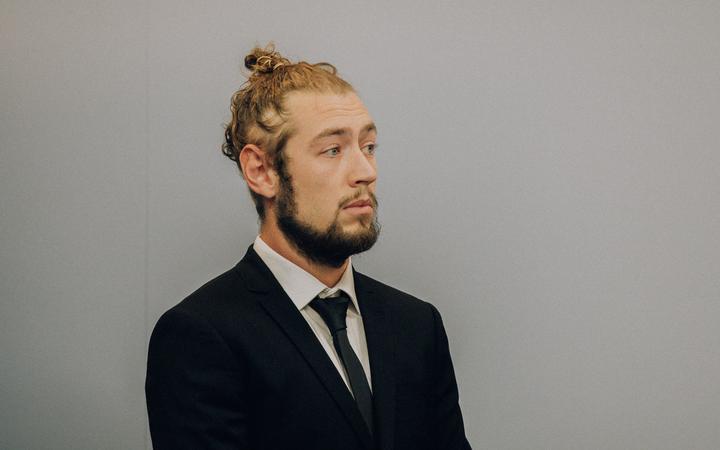 Justin Bergman, 24, pleaded guilty in the Hutt Valley District Court to criminal nuisance and disrupting a public meeting over his actions on 30 January.

Police prosecutor Graeme Burr told the court Bergman went to the races at Trentham with a group of friends and they had been drinking all day.

About 4pm, track officials were preparing for the eighth race of the day and Bergman somehow gained access to the "bird cage" - a private marshall area used to parade and showcase horses.

"Whilst inside he approached the horse and jockey, yelling and screaming at them in an attempt to spook the horses.

"His actions annoyed and unsettled some horses and their jockeys but he did not succeed in his aim of spooking them."

Bergman moved to a grassy area by the chute and continued making "growling noises".

Then - under the gaze of 12,000 spectators in the stands and a live broadcast - he hurdled three fences and ran onto the track, just ahead of the horses thundering towards the finish line.

"At this stage of the race, the 500kg horses and their riders were travelling between 60 and 65km/h and were approximately 15 metres from him.

"Several jockeys were forced to take evasive action, including slowing their mounts and swerving left and right, narrowly missing each other to avoid hitting the defendant."

Once the horses had passed, Bergman turned to the crowd and lifted his arms in "a victorious manner".

Police were promptly at the scene.

"The defendant then stated he had been thinking about running onto the racecourse throughout the day. In explanation he told police that was he was an animal rights protester and he was protesting the treatment of horses."

Bergman's lawyer, Carrie Parkin, told the judge a comprehensive alcohol and drug report had been recommended but agreed there was no need to delay sentencing for that.

"My submission would be the inevitable result is going to be a sentence of supervision, coupled with community work to address the punitive needs of the court, along with any reparation required."

Judge Craig Thompson told Bergman his actions had put more than one life in danger.

"What you did posed very significant danger to the drivers and the horses and not least to you as well, and that can only be explained as an alcohol-fuelled moment of complete madness."

However, the judge gave him credit for never having been before the courts previously, his early apology and guilty pleas, offer of reparation and self-referral for an alcohol assessment.

Bergman, who is unemployed, was sentenced to 100 hours' community work, one year supervision and ordered to pay $8880 reparation to the TAB at the rate of $200 a week.

The horse most badly affected, Boston Strong Boy, had to be declared a non-runner and all bets on him refunded.

New Zealand Thoroughbred Racing lawyer James Dunne said the industry "would have preferred a stronger sentence" but the court had still sent a clear message that such behaviour would not be tolerated.

Bergman has also been banned from all New Zealand racecourses for life while races are in progress and the Wellington Racing Club and others have trespassed him from their venues at any time.

"A tragedy here was only avoided by the very narrowest of margins by a hefty dose of good luck and by some quick thinking on the part of our riders," Dunne said.

"So from our perspective, it's not about punishing Mr Bergman, it's just about recognising the fact this guy can't be allowed near a racecourse ever again because of the stupid and thoughtless way he's behaved."