Police say they are moving three checkpoints north of Auckland back to where the legal boundary sits which was used during the last lockdown. 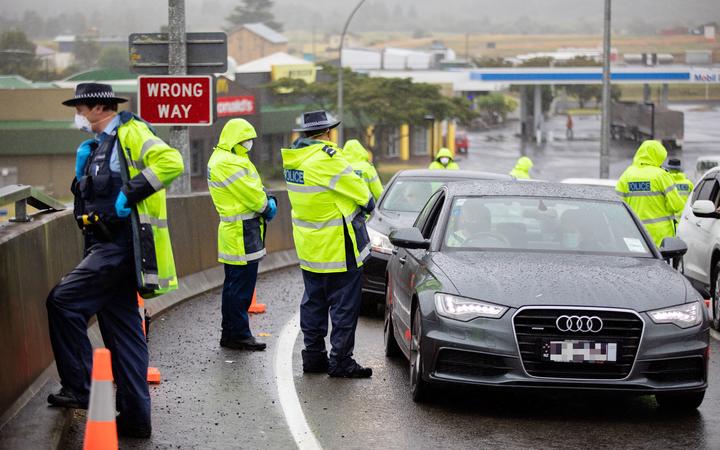 Residents of the Northland town of Mangawhai Heads had a day of "absolute confusion" as to which alert level they were in.

The Health Order to implement the alert level changes and the official government Covid-19 website showed maps with the town outside of the Auckland area.

However, police checkpoints had been set up to encompass the town within the Auckland zone.

Over the course of the day, three Northland towns - Mangawhai, Kaiwaka and Oneriri - were part of Auckland's restricted travel zone.

Even Kaipara Mayor Jason Smith had no idea which alert level his residents were at.

"There's absolute confusion because everyone's been told there's one source of truth: the Covid-19 website. That has [had] conflicting information with other sources of information, including where the checkpoints are," Smith said.

Smith spent a lot of the day to get a clear answer about what alert level they were at.

It caused issues for the local school and cafes - all prepped last night to open at alert level 2, only to get word this morning they would be included within Auckland's boundary.

In Mangawhai Heads, Brewed As owner Anna Wilson said they felt comfortable opening under level 2 as expected like last time.

"I think it's just been the misinformation ... about where our border is. Everyone was assuming it was the same as last time but the roadblocks have been put in different locations."

The lack of clear direction prompted many to operate as though they were in level 3 as a precaution.

Wilson said it was frustrating for them and their staff, and had thrown their ordering of goods for the rest of the week into uncertainty.

"You can work with information, that's absolutely fine ... it's just not knowing what we're meant to be doing when it's your livelihood, your business."

It took until 4pm before police said they would move three checkpoints back to where they were during last year Auckland lockdown.

"The current three existing checkpoints north of Auckland will be relocated back to the same five locations from the last regional lockdown in 2020."

Prime Minister Jacinda Ardern said the checkpoints would from now be stationed at the legal boundary of Auckland.

She said the error was down to "miscommunication", it was not her place to apportion blame, and was not the police's fault.

Auckland southern border also shifted - with a southern State Highway 1 checkpoint at the Bombay Hills in August, this time moved south to Mercer - and unlike the northern checkpoints police said it would remain there. 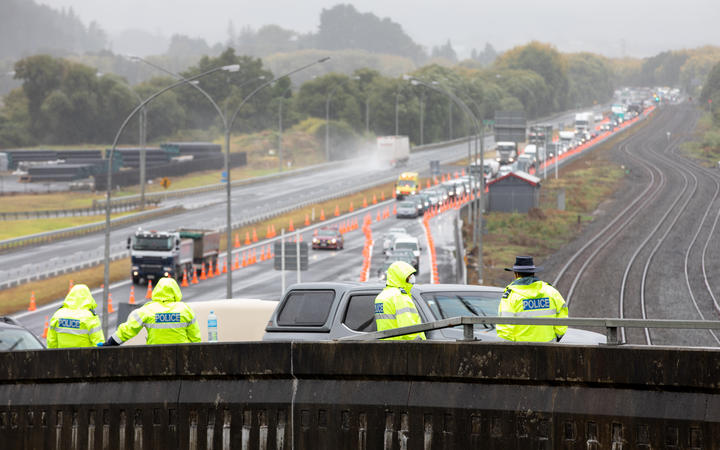 Pōkeno resident Kumar works in Hamilton. Neither of those towns are in Auckland, and he was not travelling through Auckland, but Pōkeno was this time included inside the Auckland boundary.

He was trying to go to work but was turned away and sent home.

"I showed them my drivers' licence with a Pōkeno address. Geographically it falls in Waikato, not Auckland. I do understand they're trying to do good for us but they're struggling with the communication ... heaps of people in the line had to go back home because of this change of the border restrictions."

Auckland Mayor Phil Goff supported the lockdown, and despite the impact it would have on people and their businesses, said it was the best option.

There were reports that roads out of Auckland last night in the north and south were busier than normal with suspicions Aucklanders were fleeing before checkpoints were imposed.

Goff urged Aucklanders - wherever the lines are drawn - to do the right thing and not push the boundaries.

"Police will stop the vehicles and ask the questions ... if you don't have a good reason for leaving, other than wanting to go to the back for three days, that's not a good enough reason and you are likely to be turned back," Goff said.

In a statement, police said they were pleased with the public response to the alert level changes.

"Eight checkpoints were set up around Auckland's regional boundaries as the alert level 3 restrictions came into effect at midnight.

"Police are in the process of setting up additional checkpoints and refining the location of existing checkpoints to ensure they are as close as possible to the boundary.

"These will all be in place by 6pm this evening, and will remain in place until midnight Wednesday 17 February.

They said their first focus was to educate people about the changes, and only a small number were turned away due to non-essential travel.

By 6pm tonight, police checkpoints will be at the following locations: