The Defence Force has finalised new rules on how it will deal with reports of civilian harm involving New Zealand soldiers. 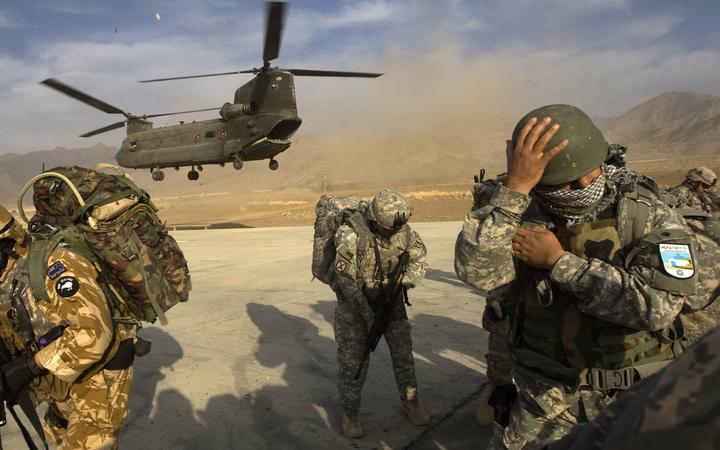 US and New Zealand soldiers take cover as a helicopter arrives to transport them to Khost province in Afghanistan in November 2008. Photo: AFP

The move was one recommendation from the government inquiry into an SAS-led raid in Afghanistan - known as Operation Burnham.

A child died in the raid, but the inquiry found that the operation that led to their death was justified under international law.

The NZDF said the order created a "consistent and transparent approach" to dealing with any reports of incidents.

The framework states eight steps should be completed for reports of civilian harm: incident awareness, an initial notification report, initial assessment, incident report and then an investigation. The final three steps are sharing of findings, amends, and closing authority.

Asked how reports were handled previously, an NZDF spokesperson said: "The obligations on reporting of serious incidents did exist previously across a range of orders and guidance.

"However this new order centralises all of our reporting and investigation responsibilities, and clarifies accountabilities with a specific focus on civilian harm."

Defence legal services director Brigadier Lisa Ferris said civilians were a protected class of person which meant they could not be made the subject of an attack.

"However, modern warfare is increasingly taking place in urban areas and often with non-state actors who operate from the civilian environment. That multiplies the complexities of engaging in armed combat for regular forces, exposing civilians to greater levels of risk.

"The protection of civilians is a strategic priority for the NZDF. The purpose of DFO 35 is to implement NZDF-wide procedures for responding to reports of civilian harm arising from military activity in situations of armed conflict."

The NZDF said the order was intended to be a living document, and would be updated as needed so that it remained as relevant and effective as possible.

Click on the link below to read the full order.