Workers will carry out a permanent repair over the weekend to the ageing stormwater pipe that opened up a sinkhole under a busy central Wellington road. 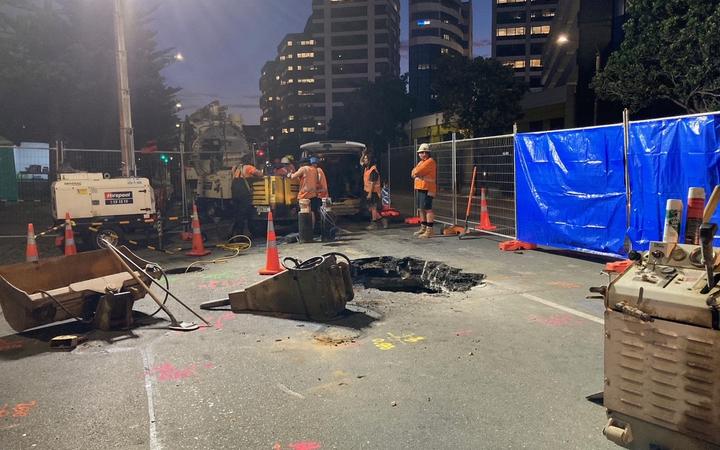 Water crews temporarily repaired the stormwater pipe which caused a sinkhole to open up on Jervois Quay, near the harbour, on Wednesday.

The pipe and fills and empties with the tide and over time a hole in the pipe is thought to have let water gradually erode and wash away the subsoil, a Wellington Water spokesperson said.

Overnight workers placed a temporary cap over the hole in the pipe, filled in the eroded area and sealed the road.

The 450mm diameter earthenware pipe was laid in the early 1900s.

Two of the three lanes reopened in time for Thursday morning traffic, with one lane closed to keep heavy traffic off the plate covering the temporary repair.

Wellington City Council chief infrastructure officer Tom Williams said the permanent repair over the weekend will fix a join and replace an element of the pipe so stormwater isn't leaking into the ground.

It is the latest in a series of damaged pipes in the capital, following a burst water main spouting a huge geyser of water in Aro Street, a broken sewerage pipe in the central city and multiple similar issues last summer.

"We're all in agreement that we do have significant issues with the age, residual life and condition of our Three Water assets under our city," Williams said.

The mayoral task force on the capital's water system points towards increased investment, he said.

"And equally, we're spending a lot of time and effort understanding the condition and criticality of those assets.

"We're putting a lot of cameras down a lot of pipes to really understand what the condition is so we can make the best investment decisions moving forward.

"Some of the state of our underground assets is caused by a prolonged period of underinvesment but some it is caused by the fact that it's just at the end of its economic life.

Residents in part of the Wellington suburb of Karori had water cut off after a water main burst.

Wellington Water said the main ruptured at Collier Avenue on Thursday morning and a water tanker would provide a temporary supply to residents.