The Bay of Plenty has been rocked by a series of earthquakes in a short space of time this morning. 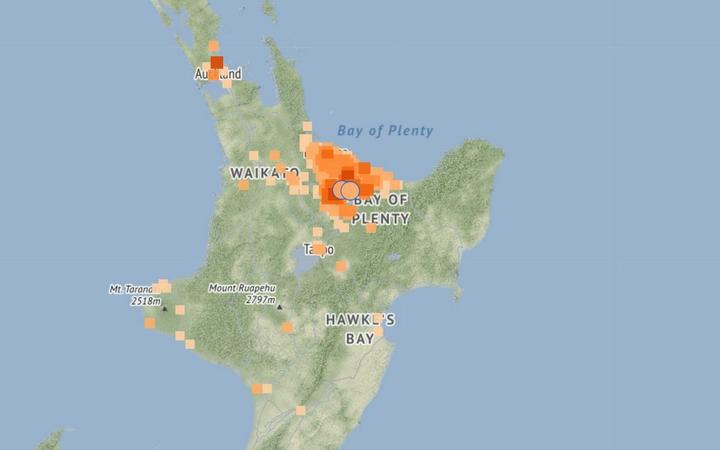 The largest was a magnitude 4.9 earthquake which struck at 8.12am at a depth of 5km and was centred 20km east of Rotorua.

Fifteen minutes earlier a magnitude 4.5 quake struck also about 20km east of Rotorua, according to GeoNet.

It's been a shaky morning in the Bay of Plenty- M4.5 earthquake followed by a M4.9, and there are a number of aftershocks occurring. It's shallow, and we've had more than 4000 felt reports. https://t.co/IfDHPz3p9M pic.twitter.com/Yx1QasTvWB

Four minutes later a 3.7km quake struck 15km north-east of the city and had a depth of 21km.

It was followed a minute later by a 3.4 quake at a depth of 4km and was centred 20km east of Rororua.

There have been several other quakes between 3.3 and 3.8 that are part of what GeoNet is calling a swarm - all centred in the same location.

GeoNet described the 4.9 shake as a moderate one while the rest have been labelled weak.

"This looks like a swarm - we often see these in this area (the Okataina volcanic centre), and there were small foreshocks yesterday," GeoNet said on Twitter.

"The last swarm with quakes of this size was in Rotoehu in July 2004."

This looks like a swarm - we often see these in this area (the Okataina volcanic centre), and there were small foreshocks yesterday. The last swarm with quakes of this size was in Rotoehu in July 2004.

Bay of Plenty Civil Defence said that no damage has been reported after this morning's swarm of shallow earthquakes.

Group controller Clinton Naude said they have been in contact with a large number of people and none have reported any damage.

The Rotomahana Dam, south east of Rotorua, is being checked by engineers.

The Rotorua Museum and Performing Arts Centre is also being assessed.

Rotorua Mayor Steve Chadwick said the 4.9 jolt was enough to make her want to duck for cover but it was over fairly quickly.

All council buildings and facilities have escaped unscathed.

She said while tremors aren't uncommon in the area, some residents are feeling unnerved.

"There were a series of shakes actually and I haven't felt the others but certainly other people are reporting in that they felt a little swarm."

The quakes were felt in Tauranga, Taupō and Whakatāne.

Rotorua local Rochelle said the quakes had been the talk of the cafe she works in, but there did not appear to be any damage to the city.

"All of a sudden, everything started shaking and then we were all a bit like 'what's going on' and the customers were a bit worried," she said.

"About 20 minutes later, I was in the kitchen making a cake and everything started shaking and the brick walls were shaking in the cafe."