A woman says she was left shaken and humiliated after her lifejacket was pulled off by a staff member at a water park in Auckland, but the company says the holding of jacket was just to ensure her safety.

The woman, who did not want to be named, went to Waterworld water park in Browns Bay on 6 January with her six-year-old daughter.

According to rules stated online, the company requires customers be able to swim, but the woman said she did not know an accompanying parent also needed to.

She said she realised they could not play at the inflatable park as she could not swim to it as required. She does not swim and there was no one to supervise her young daughter that could.

The woman turned back to ask for a refund, but was refused as per the company's terms and conditions.

She said she decided to keep the jackets until the one-hour session they had paid for was over. She wanted to allow her daughter to have some fun playing in the shallow water so the money paid would not have been a total waste.

The woman said she walked away with the life jacket to get her daughter's surfboard but a male staff member came after them, telling her to take off her jacket and leave.

"Based of my life experience, I thought I have the right to use the life jacket for the hour because they wouldn't refund me. We weren't going to go somewhere far," she said.

"While he was talking, he already came up close to me and was trying to take the jacket off me... my instinct was to dodge and make sure he didn't touch me... I was trying to block his hand... but he was too strong."

She also said the staff also accused her of being a "liar" who intended to steal the jacket, which the company denied.

In a video recorded by witnesses, she can be seen being dragged and pulled towards the company's marquee by the male staff member until the life jacket came off.

The woman said she did not give up the jacket easily because no one explained to her why she needed to hand it back. Her daughter was also visibly upset, according to the video.

"No matter as a human being or as a consumer, I think my rights haven't been respected... I think me and my child have been insulted in the public. I was hurt both physically and psychologically."

She said she has got a bruise on her left arm which was caused when the staff tried to unbuckle the jacket by grabbing her arm. She says she called the police following the altercation.

Director of Waterworld limited, Kel Travers, said the requirement of being able to swim is on the company's website when customers make a booking, and is also covered by signs at the location and in the safety briefing. 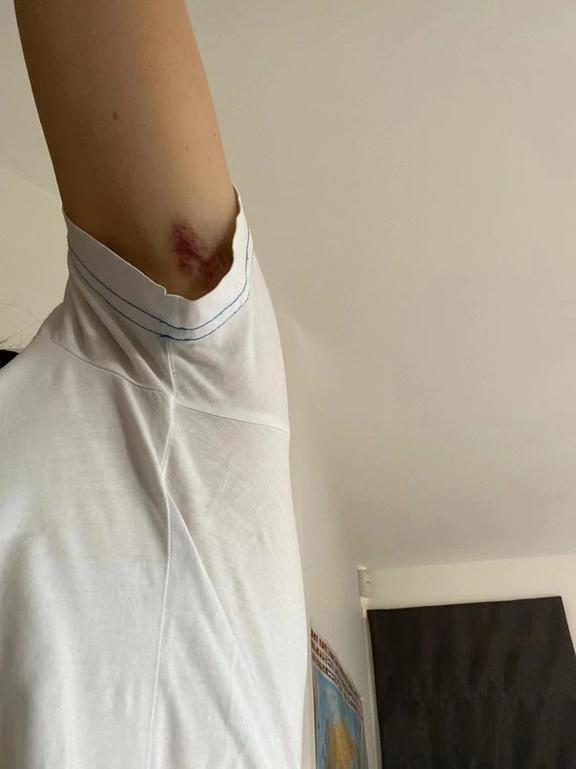 The woman said she's got a bruise on her left arm when the man tried to forcibly unbuckle the jacket. Photo: Supplied

The company's website has been updated recently with a message "You must be able to swim. Please don't attend if you're unable". Travers said it was because a lot more people were turning up while unable to swim.

Travers said the company's lifejackets can only be used by customers on the water park and going surfing with them is not an option as it "creates opportunity for theft and liability with lifeguards not monitoring the water she would have been swimming in".

He also said he tried to explain the rules to the woman, but the woman disputes that.

Travers said while theft of the lifejackets was not a concern in this incident, the risk of drowning was of "paramount importance". He also said it was unfortunate what occurred but that he treated the woman properly.

He denied that there was any dragging and pulling, but said he "was holding the lifejacket and she started to thrash".

"I was making sure that they didn't go into water. They couldn't swim. She absolutely demanded being taken out by boat. If we took her by boat and left her on the water park, there was a high chance that she might have drowned and one of our life guards may have missed it, so there was absolutely no way that we're letting her into the water."

The woman denied she had asked to be taken out by boat.

"At the end of the day, it's about people's safety. That is the number one rule. There is nothing else and there's no compromise on that," Travers said.

Head researcher at Consumer New Zealand Jessica Wilson said the woman was treated poorly and the company owes her an apology.

"There appears to be some dispute, some confusion about the rule, but the staff member should have approached this in a much more professional manner. He can't treat customers like that. He should have clearly explained to her the situation and tried to resolve things. He should not have grabbed the jacket and pulling her along."

"There is clearly conflicting accounts of what happened and what was said, however, the woman shouldn't have been treated in the way she was by the staff member. If he was concerned she was taking the life jacket, he should have called the police," she said.

"In general, staff can't detain you if they think you're shoplifting or taking items from their premises. The only exception is when that item is $1000 or more or it's night-time. Obviously, these conditions didn't apply in this case. Really the way she was treated, in our view, was unacceptable."

Wilson said the video footage showed the staff member was not merely holding the jacket but "someone being pulled along in a manner that was really unacceptable" and staff should have approached the issue more professionally.

"In this case, I think the company really needs to acknowledge that what the staff member did was unacceptable and apologise for its part in this incident."

Police said the matter was a civil dispute, which was explained at the time the complaint was filed.