Auckland businesses trading on the doorstep of the America's Cup Village face a nervous wait to see if sailing fans turn out in their droves for the Prada Cup. 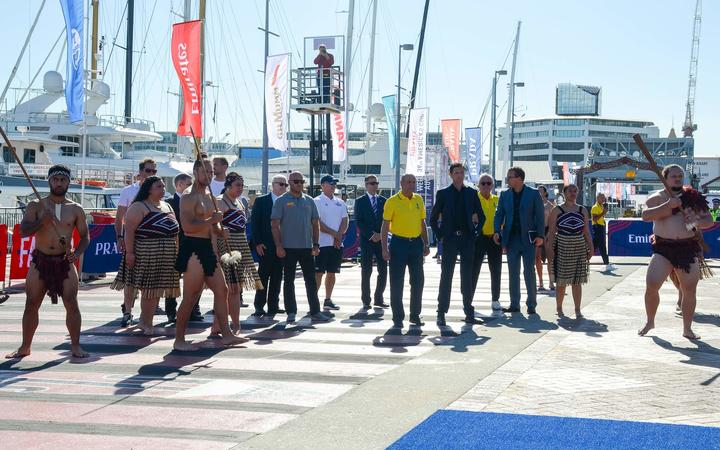 The challenger series starts in the Hauraki Gulf this Friday, with Luna Rossa, American Magic and Team UK set to duke it out for the right go up against Team New Zealand in March's main regatta.

For the likes of charter boat owner Doug Cabot, the sailing is a livelihood, as well as a love.

Cabot's superyacht, Pacific Eagle, is moored in Auckland's Viaduct Harbour, ready to take punters out on the water.

"And we want to be two things; the most accessible superyacht here for daily viewing of the races, as well as the making the very affordable price of $195 per person to come out and go for a two hour our with us on practice days," he said.

Cabot said he had been busy in the lead-up to the Prada Cup challenger series.

However, the absence of overseas sailing enthusiasts means it hasn't exactly been smooth sailing.

"During the holidays here it was actually quite busy, with people from the South Island and North Island all just driving or flying in to see what's going on here."

While last year's pre-Christmas regatta gave Kiwis a brief taste of America's Cup fever, the stakes are higher in the Prada Cup.

From Friday, Luna Rossa, American Magic and Team UK square off for the right to contest the America's Cup against Team New Zealand in March.

Only one team will challenge Team New Zealand, with the other two effectively eliminated.

And while the three teams have brought their cutting-edge boats and some of the world's best sailors, a global pandemic means they haven't brought hordes of international fans.

Brett Sweetman is general manager at Auckland's multimillion-dollar Park Hyatt, a luxury hotel on the doorstep of the America's Cup village, which opened late last year.

The lack of international tourists means Prada Cup bookings hadn't lived up to expectations, he said.

"We are getting some good interest domestically, but things are still very short term," Sweetman said.

"I think everyone's still very hesitant to make long term plans anywhere around the world at the moment because of the changing environment.

"Particularly for that America's Cup period in March, we are seeing some strong reservations coming through and a little bit so in that Prada Cup period."

Meena Kakkar is general manager at North Park, a humming restaurant and bar on North Wharf, less than 200m west of the America's Cup village.

Kakkar said her business relied on overseas visitors this time of year, so the America's Cup Christmas regatta last month helped pick up the slack.

"Every summer we used to be really busy with all the tourists and everything, but with tourists not being there we've really seen the bottom as well. So, with the Cup come in, we are seeing people come in now," she said.

As for the Prada Cup, she Kakkar says time will tell whether that brings much-needed custom, or whether the belt tightening will continue through until the America's Cup in March.

"We're hoping definitely that we see a lot more people," she said.

"It's not the actual race, so we don't know how it's going to go. So the first week will tell us how it will be the following weekends."

But if the attitudes of Aucklanders wandering the America's Cup village is anything to go by, businesses here have nothing to worry about when it comes to cashing in on the Prada Cup.

RNZ spoke to half a dozen Aucklanders, and visitors to the city, most of whom had travelled to Auckland's waterfront specifically to see the bases, the boats and to grab a bite to eat.