More than 150 undersized pāua and nearly 3000 cockles that were taken illegally were returned to the sea after operations by fisheries officers and police. 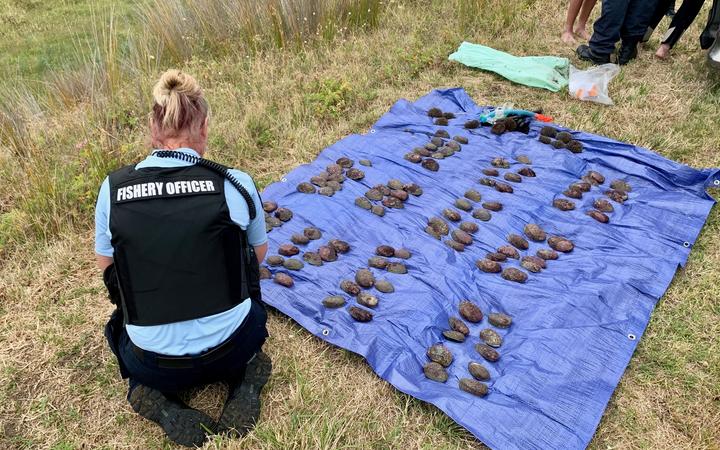 Fisheries officers with the haul of pāua seized at the weekend. Photo: Supplied / Fisheries

Fisheries NZ received calls to its poacher line at the weekend about groups of people gathering cockles at a Eastern Beach in Auckland where gathering shellfish is prohibited.

The ban is to replenish stocks and the area is clearly signposted, Fisheries NZ said.

Fisheries officers found a man about to load a large bag of cockles into a vehicle at the southern end of the beach.

"Our officers pointed out there were 16 MPI signs indicating the shellfish closure - at the beach and on approaching the beach," Orr said.

Orr said the group also did not know the daily limits for taking shellfish from Auckland and Coromandel beaches that are not closed.

The alleged offenders may face prosecution.

In two other recent incidents at Eastern Beach fisheries officers seized a bag with 133 cockles hidden under a large inflatable toy and on Wednesday night seized 579 cockles gathered illegally.

Three people may be prosecuted.

The cockles in all three seizures were returned to the sea.

Meanwhile, in a joint operation in Mahia, Hawke's Bay, at the weekend, fishery officers and police checked the haul of a few fisherman, and found 156 undersized pāua.

The pāua were returned to the sea, while the vehicle and gear of the alleged offenders, who may face prosecution, have been seized.

"It is extremely disappointing that greed and lack of consideration for the marine ecosystem is common among those we catch," Orr said.