Parents and former teachers have told the Ministry of Education that the owner and manager of a childcare centre in Feilding locked toddlers in rooms, fed children mouldy food and smacked them. 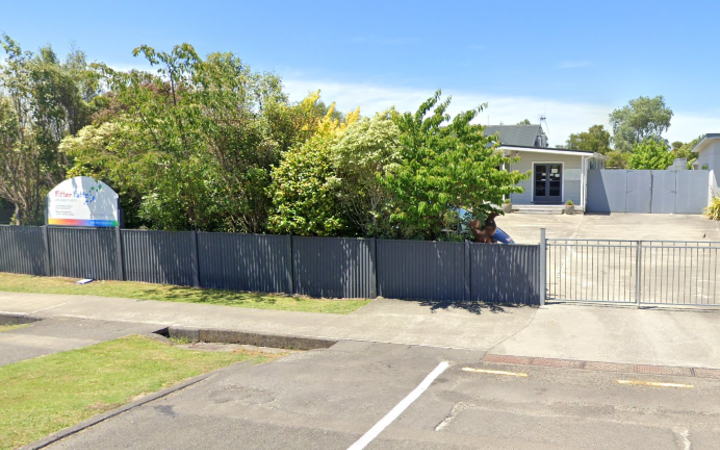 The Pitter Patter Education Centre is being investigated by the Ministry of Education and complaints have been passed onto the police. Photo: Google Street View

The Pitter Patter Education Centre had its licence suspended for three weeks in November while the Ministry of Education (MoE) investigated complaints spanning at least five years.

The centre has since re-opened, although the investigation is continuing and complaints have been passed onto the police.

This story is not connected to the Auckland child care centres with the same name.

In statements to the MoE, former teachers claim they and the children were bullied and abused by the manager, Pauline Murphy.

RNZ has seen some of those statements.

One teacher said it was common practice for misbehaving children to be locked in the sleep room.

"During my first few months there we had someone come in because a family had laid a complaint against her [the manager]," the teacher said.

"It was to do with her using the sleep room as a punishment for children."

Another teacher said if anyone brought the children out of the room, Murphy would yell at them to put them back.

Staff said they were constantly bullied, belittled, called stupid and made to feel like terrible teachers.

A former teacher said she watched Murphy physically hurt the kids when they did not behave.

"This particular child was, you know, getting quite angsty and ready to go home, it was sort of probably close to the five o'clock mark, and he started throwing things and getting quite agitated," the teacher said.

"So she sat him on the couch that's outside the office area.

"She was sort of holding him on the couch trying to entertain them or what-not, he started kicking off again, and he was sort of yelling, and as I looked up, I saw her gouge, like grab his hand and pinch him really aggressively and then she yanked his hair.

The teacher who witnessed the incident said she pretended not to see it because she was so scared of what the manager would do to her and her career.

She regretted not speaking out at the time but said she was just one of many who were afraid because in the past, complainants had been threatened with legal action.

Murphy had also been accused of shaming parents, taking lunches off kids and charging families money to feed the children mouldy food or leaving them hungry.

"Things like a parent would bring a child in with food from home and in this one particular incident, as soon as a parent walked out of the door, she then went up to this child, put her fingers in their mouth, scooped the food out of their mouth, took the food off them and put it in the rubbish bin and then push[ed] the child away to go and play," the teacher said.

"This child went off crying."

Another mother paid for cooked meals like lasagne or macaroni and cheese but said her children told her they were only given one sandwich.

And when the centre put on entertainment for the kids, the manager would charge $5 a child for them to watch it.

The parent said kids whose parents did not pay or could not afford to were excluded.

"I watched a little boy who was only about 2 wander inside to see what all the laughing and cheering was about, and he was snatched up really roughly and almost thrown outside because his parents either couldn't afford for him to see it, or they forgot to pay. "

More than 10 people - parents and former teachers - have filed complaints with the MoE over the treatment they and their children experienced at the centre under the management of Murphy.

A parent of a child who went to the centre said she felt awful for not believing her son when he told her he was being hurt.

"My son did actually tell his dad one day that he had been smacked by the centre owner, but at the time, we didn't believe him," she said.

"And just looking back now, I hate that I didn't do anything about it at the time, we kind of brushed it off and was like, no, you're just being silly, she wouldn't do that.

"But after hearing it from other parents who have told me of their experiences at the centre, I 100 percent believe my son now and I, I just feel bad for not having his back."

The mother said the manager had recommended a smack on the bottom as a good way to get him to sleep when he was at home.

The toddler also had a bite mark that lasted more than two weeks, but the manager refused to do anything about finding out what happened.

The complaints also claim Murphy was applying for funding for children who didn't go to the school, wouldn't pay staff properly for their hours, and that there were too many children for the number of teachers.

The MoE confirmed to RNZ, the centre was closed for three weeks.

"We suspended the licence of Pitter Patter Education Centre on 23 November as we had received a number of serious complaints.

"Whilst we are investigating we also have referred these complaints to police and the Teaching Council to investigate.

"We gave the service until 11 January 2021 to address the conditions that were placed on the suspension."

It determined the centre had satisfied the conditions and it was allowed to reopen on Monday 14 December.

The MoE said it would visit the site in January to ensure the conditions were still being met, but the investigation was continuing.

Police would not comment to RNZ, but the Teaching Council said in a statement late on Wednesday that it was in the early stages of considering the information about the childcare centre and is still deciding its next steps.

The reopening of the centre came as a shock to those who had complained.

"That's been the hardest thing," one said.

"Everyone's pretty upset. feeling quite deflated. Because we've, you know, finally stood up and had a voice.

"We've put ourselves on the line as well. I mean, that's the biggest thing.

"I've still got people out there that know stuff that won't stand up in fear of repercussions from this woman."

RNZ contacted the manager from the centre, Pauline Murphy, who did not respond to repeated requests for comment.