Real estate agents are being accused of fuelling the red-hot property market by manipulating so-called "estimated prices" on websites.

Consumer advocates warn it is a case of "buyer beware" and urge those looking for a home to do their homework first.

Edward and his wife have been looking for a home in Wellington for a couple of years "on and off".

"We start looking, and then prices shoot up too much and we stop ... until we go another round."

An avid follower of the website homes.co.nz, Edward was horrified to learn it was a simple matter for agents to bump up the estimated value of a property by uploading their own appraisals.

"And quite often it goes way above the market rate for that area."

In a blog post, which dropped off the website when it was re-platformed, marketing manager Fiona D'Silva Moiyadi, gives step-by-step instructions for modifying HomesEstimates.

Buyers expected estimates on third-party websites to be impartial, and letting people with a vested interest influence them was distorting the market, Edward said.

"It makes me extremely angry.

"As soon as one person comes along with enough money to buy one of these hideously inflated places, then everything else in the area goes for the same amount. 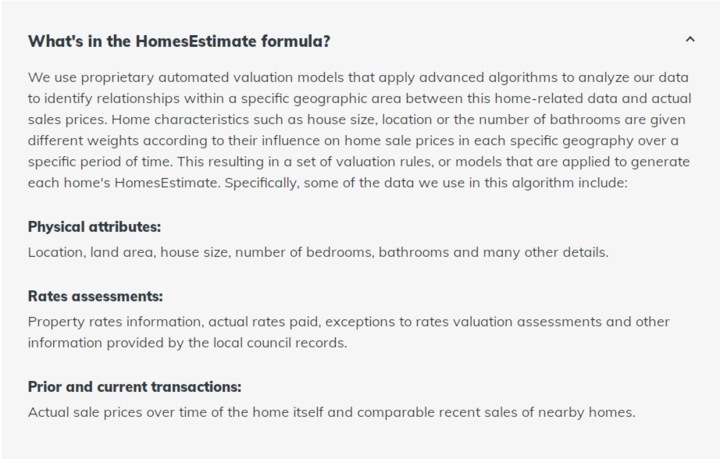 According to homes.co.nz, its HomesEstimates cannot be used in place of formal valuations - they were "simply a starting point".

Chief data scientist Tom Lintern said the website used an algorithm to estimate market values based on the physical attributes of the property, rateable valuation and local sales histories.

However, he said computers did not know everything, which is why they allowed vendors and real estate agents to add valuations or appraisals to the mix.

"They've walked through the house and they know it's got a granite benchtop, or it's particularly run down, then we take that into account.

"And that's just a recognition that who are we to say our algorithm is better than an expert who's done a physical inspection of the place?"

He did not believe the practice was inflating house prices.

"The market's going to talk right? And the benefit of making use of as much information as we can, is that everyone is as informed as they can be."

Here is one example of the market talking:

In June, one three-bedroom house in Newlands, Wellington had an estimated value on homes.co.nz of $675,000, below the Newlands average of $720,000.

'Our job is to get the best possible price' - realtor

Collective First National agent Shannon Crawford, who listed the property, said even registered valuers were having difficulty pricing properties in this market.

"It's the hardest question in real estate because obviously what someone is prepared to pay on a property, it all comes down to where someone sees value in that particular property.

"In regards to the offers that you receive, from the bottom to the top is sometimes a huge range."

Hamish Timmins from Ray White Real Estate said most sales in Wellington were by closed tender.

"And so invariably someone will pay ahead of the market to get into the property, and then once you get a few of those results happening, it kind of sets where the market is going.

"So I do feel partly responsible in terms of prices going up, but that's our job - our job is to get the best possible price."

General manager David Nagel said unlike some providers, QV did not adjust estimates if agents or vendors queried their accuracy.

"It's an independent estimate and you can challenge the assumptions that go into that, such as the floor area or the number of bedrooms etc.

"But the actual estimate is just that: it's QV's view of what the property is worth today and you cannot challenge that."

Under the Real Estate Agents Act, appraisals must give a fair and accurate reflection of market value.

Consumer New Zealand chief executive Jon Duffy said in fairness to agents, it was difficult to anticipate where a sale price was going to land in such a complex environment.

"Some of those discrepancies could be explained away by the heat in the market.

"But consumers should be very wary, and anything that is completely out of whack could be the subject of a complaint to the Commerce Commission or the Real Estate Agents Authority."

However, that is little help to people like Edward, who cannot get even a toe-hold on the property ladder.

"So many people are making so much money out of this and it's leaving a lot of people out in the cold, people who should be able to afford a house.

"It's not like we're on a low income. I earn a decent wage, my wife earns a decent wage, we've got two kids ... we're certainly able to afford a mortgage, we just can't find anything that's affordable.

Meanwhile, new research from Statistics New Zealand this week showed homeownership rates have dropped to their lowest level in 70 years.