A man who was acquitted of murder in Wellington is now a suspect in a case involving a makeshift torture chamber in the Netherlands. 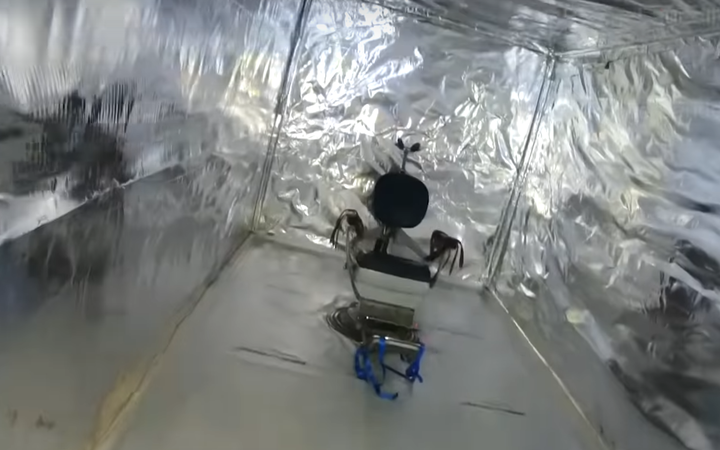 One of the shipping containers had been sound-proofed and had a dentist's chair nailed to the floor. Photo: Screenshot / Politie Landelijke Eenheid

William Jan Haanstra, 43, was acquitted of murdering Terri King, whose body was found in the Tararua Ranges in 1999.

He is now one of nine people arrested by Dutch police, after they discovered seven shipping containers converted into a makeshift prison and a sound-proofed "torture chamber" while investigating gang activity.

The chamber came complete with a dentist's chair and tools including pliers, scalpels and handcuffs.

In 1999, the then-22-year-old Haanstra was living in Miramar with his family, who had emigrated to New Zealand from the Netherlands.

He was charged over the murder of Terri King, whose body had been found in the Tararua ranges with a gunshot wound to the back of his head, but was acquitted by a jury after a two-month trial in the High Court at Wellington.

Correspondent Stephanie van den Berg told Morning Report the police revealed in April that they had hacked into the encrypted messaging system of an organised crime network.

That allowed police to see what criminals were planning and one of the things they discovered was that people were chatting about this torture chamber, she said.

In July police discovered the seven shipping containers, one of which contained a torture chamber and released video of it.

"This is really like a horror movie torture chamber where it's all sound-proofed, there's a dentist chair bolted to the floor, there's handcuffs hanging from the ceiling and they found a whole array of instruments which they think would have been used for torture which include garden shears, pincers, hammers, scalpels, saws, gas burners - it's really quite horrific when you see the arsenal of weapons that they have," van den Berg said.

The suspects have already been in court for a procedural hearing and said the torture chamber was only for show and meant to scare people off but that they did not intend using it.

The police have said that the suspects were sending each other messages about potential victims that they wanted to kidnap and take to the chamber and they stepped in to warn those targets.

Haanstra is not one of those suspected of building the torture chamber and has been characterised as a career criminal by Dutch media, van den Berg said.

Haanstra has also been linked to a 2008 Rotterdam cold case murder.

"He was also in the picture for a suspect but also acquitted or let go by the police for lack of evidence."

She said there are reports that the family of the Rotterdam victim is now hoping the case will be reopened because Haanstra is in custody for this crime that perhaps people will come forward.

The Dutch police expect many other criminal cases to come to light as a result of the encrypted mobile phone conversations they managed to hack.