The government wants all education providers, from kindergartens to universities, to use te reo Māori every day - but has stopped short of making the language compulsory. 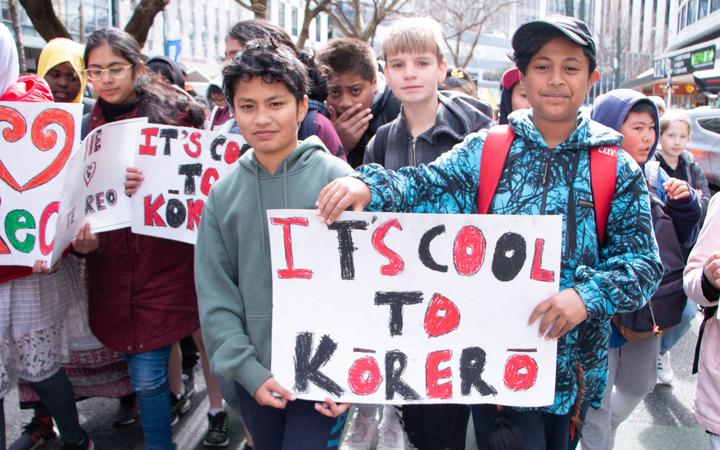 The first ever Statement of National Education and Learning Priorities said schools, early learning centres, and tertiary institutions should meaningfully include Māori language and tikanga in their everyday life.

It also said they should ensure they were safe, inclusive and free of racism, discrimination and bullying; reduce barriers to education including financial barriers; have high aspirations for all learners; and ensure every learner gained sound foundation skills including language, literacy and numeracy.

Minister of Education Chris Hipkins told RNZ the statement provided schools and other education providers with a checklist of things to work on.

"So if you're a school board of trustees, the Statement of National Education and Learning Priorities sets out the things that we want you to be prioritising like ensuring that your school is free from racism and bullying and discrimination, making sure that you're breaking down barriers to participation at all levels of the school life."

The idea for the document dated back four or five years to the previous National government and it ensured the government's expectations were clear, Hipkins said.

"The expectations that we've put out there now are very consistent with what communities have told us they want to see from the education system, so there's been a lot of consultation leading up to this point," he said.

In terms of reducing barriers to accessing learning, the document said schools should: "Where possible, reduce non-fee costs, including costs associated with BYOD [bring your own device] policies, and take advantage of policies to reduce financial dependence on families and whānau".

It said schools could meaningfully incorporate te reo and tikanga Māori into their every day life by seeking advice from Māori on what to do, improving teachers' knowledge of te reo Māori and tikanga Māori, and talk to learners and staff about why correct pronunciation was important.

The statement said students "should be free from discriminatory, sexist and bulling behaviour including individual and institutional bias, which have significant and long lasting negative impacts on health, wellbeing, identity and educational achievement".

It said education providers should meaningfully incorporate te reo and tikanga Māori because they were essential components of the heritage of New Zealand.

"They are central to Māori identity, language and culture, and integral to the identity of all New Zealanders. They should be embraced, supported and strengthened," the document said.

Hipkins said using the language meaningfully might mean teaching children the names of colours and numbers in both English and te reo.

That was already happening in a lot schools and early learning services, he said.

"There's nothing threatening about that, it's a really positive development for the country. It recognises that te reo Māori is our first language, one that we should all be proud of."

The goal might be challenging for some schools, Hipkins said, and he acknowledged there might be resistance.

"It's about saying that te reo Māori is being increasingly being integrated into our everyday life and therefore it's important that everybody has the opportunity to understand the basics of te reo Māori.

"It's on our street signs, we're hearing it on radio and television far more than we used to and people want to understand what's happening and what people are saying when they're using te reo Māori and so I want to make sure that every kid in the country has that opportunity."

Ministry of Education recently called for tenders for a $108 million push to train thousands of school and early childhood teachers to speak te reo Māori better.

The programme, Te Ahu o te reo Māori, was piloted in four regions and will be rolled out nationally next year.

Hipkins said schools and early learning centres would have to report on their progress toward the priorities in their annual reports and the Education Review Office would consider how successfully they were implementing the statement.