There's been a steady stream of people getting tested for Covid-19 in Christchurch after two community cases were reported there, and fishing company Sealord has made changes to the way it brings international fishing crews into the country, to reduce risks. 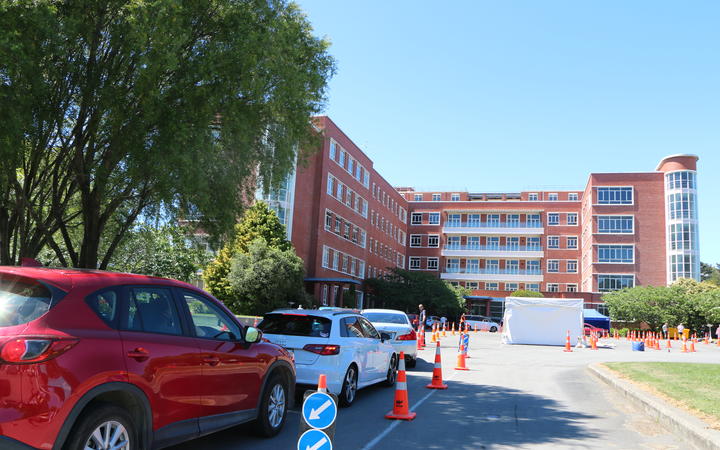 A pop up testing station at Princess Margaret Hospital in Christchurch has been busy. Photo: RNZ

So far 13 percent of the 237 Russian and Ukrainian seafarers at the Christchurch Airport Sudima isolation facility have come down with the virus, along with two healthcare workers who worked at the hotel.

The two healthcare workers are considered community cases, as they have not been overseas and caught the virus in New Zealand.

One is a nurse in her 50s. There are 17 full time equivalent nurses working at the Sudima covering a 24/7 roster, there are also three well-being staff who provide additional support.

Sealord's Doug Paulin said the next contingent of about 200 crew, who were due to arrive on Monday, have now been delayed. He said instead of spending a day together at a hotel in Moscow like they previous group did, they will travel directly to the airport.

"All of those crew had to use accommodation in Moscow before leaving, and that obviously became a place and a time they are at a greater risk - so we have got rid of that day and are making sure they continue to follow all protocols."

Genome sequencing shows the virus was passed on from within the managed isolation facility, but the source of infection is still under investigation.

One of the positive cases visited Chemist Warehouse at South City between 3.52 and 4.03pm last Friday, 30 October. Countdown on Colombo Street was also reported to have been visited by a person with the virus, on Sunday 1 November.

Medical officer of Health Ramon Pink said the person who visited the Chemist Warehouse did not have close contact with other people in the store, but an alert is being sent to everyone who checked in with the tracer app as being at the store around that time.

"We are aware that people may be concerned if they were in the store at the same time as this person, even though the risk to other shoppers and staff is considered extremely low.

"It's important to stress that this person didn't have any symptoms when they were in the store, and at that stage didn't know they would later test positive for Covid-19, Dr Pink said.

At a pop up testing station at Christchurch's Princess Margaret Hospital there was a steady stream of cars today.

"This is what we tend to see with pop-ups, they tend to drum up a bit of attention, and also they can be a bit slower for putting people through because we are using spaces we're not used to."

She said lots of people she's spoken to are being tested as they visited places that were visited by the confirmed cases.

"They're symptomatic, so they're coming to get a test for reassurance and also being sensible, which is good."

Gordon said a meeting will be held tonight to see if the pop-up will continue.

"There is actually a lot of testing capacity around Christchurch, and there always is, so even if there isn't a pop up you can go onto the DHB website and see where you can get tested at anytime."