There are no new cases of Covid-19 to report in New Zealand today, the Ministry of Health has confirmed.

Director-General of Health Dr Ashley Bloomfield says this result is particularly pleasing because it includes results from close contacts of the community case reported yesterday.

There was one new case in the community reported yesterday and two imported cases.

"We have a clear line of investigation" for the community case, he says.

Earlier, he told Morning Report a ship now bound for Brisbane is believed to be the most likely source of transmission.

In this afternoon's media briefing, Dr Bloomfield reiterated a ship the man worked on in Auckland on the 12th and 13th of October is the likely source of infection.

He says the ship had come from Brisbane and travelled to Tauranga and then onto Auckland. It had eight crew members from the Philippines.

"We will be very interested to see if any crew members on board arrive symptomatic."

He says all 21 members on the ship anchored near Napier are being treated as a close contact.

The crew members are receiving daily health checks via radio.

Dr Bloomfield says genome sequencing shows it's a new case rather than one that has been in New Zealand and has no link to the August outbreak.

The man had been working on several ships in the lead-up to his positive test result, including one at the Port of Taranaki on Wednesday 14 October. He became symptomatic on Friday 16 October and sought a test.

The man had been getting regular testing and he tested negative on 2 October.

The Ministry of Health (MoH) said the risk of community transmission is low because the man had limited contact with members of the public. His household contacts are self-isolating and other close contacts are being investigated.

The ministry is scaling up testing resources in Taranaki.

The Taranaki District Health Board has ramped up testing since the case emerged.

DHB spokesperson Becky Jenkins said speedy contact tracing, isolating and testing was crucial to stopping the spread of the virus.

At this stage the priority is to test close contacts, port workers and anyone in New Plymouth who is showing symptoms.

These priority groups can access testing at the Base Hospital community testing centre which has extended their opening hours until 5pm today and Medicross Urgent Care & GP Clinic in the Richmond Centre until 3.45pm. Testing will also be available next week in New Plymouth, Waitara, Hāwera and Ōpunake.

Dr Rob Weir, on-call medical officer of health, says the risk to the wider Taranaki community was very low, but urged people not to wait if they have symptoms and need a test.

"Everyone in New Plymouth should remain vigilant for any symptoms of Covid-19, and get a test as soon as you can if you become unwell. Testing quickly means we can reduce the risk of the virus spreading and that puts us in a good position to put a circle around any outbreak." 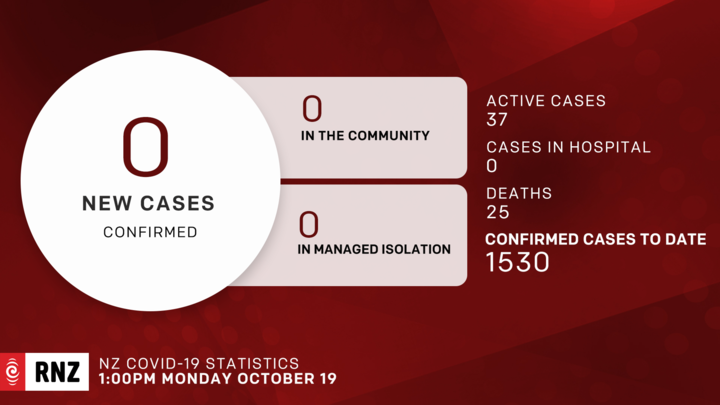 More than a million tests have now been completed.

Dr Bloomfield says they will look at testing processes around the ports to see if anything needs to be strengthened.

He says the man who tested positive had previously been getting tested as part of the border regime.

There are 29 close contacts, 21 of which are on the ship outside Napier.

A Port Taranaki worker thought to have had contact with the latest case has returned a negative result.

He said those staff members were isolating at home as a precaution.

Their results are expected to be back from the Taranaki District Health Board tomorrow.

The vessel in Napier could be taken to Auckland where the public health unit has more capacity, Dr Bloomfield says.

Dr Bloomfield says genome sequencing suggests the case did not come from a high-income country.

He says crews that are in transit through New Zealand are isolated but not routinely tested - he's been asked by the Health Minister to investigate whether they should be.

Dr Bloomfield says he considers Australia, including Victoria and Melbourne, to be low-risk areas.