People in managed isolation fear they're choking the country's landfills with an estimated 100,000 takeaway containers, bottles and cutlery sets every week. 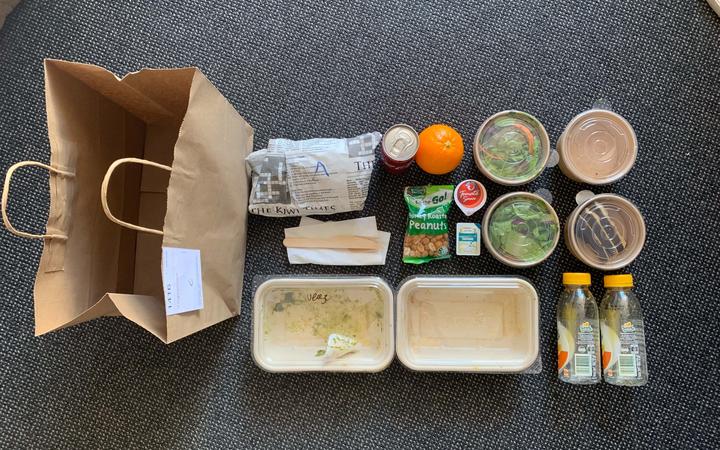 No rubbish is being recycled from rooms in the country's 32 border hotels, to reduce the handling of waste and potential spread of Covid-19.

Three meals a day are also served in entirely disposable packaging, which came as an alarming revelation to UK returnee Luke Ross, who stayed in managed isolation at Auckland's Rydges Hotel last month.

Staff assured him they were using the most "compostable and sustainable" packaging options they could source, however he said he was unable to opt out of any extras he didn't want - leaving him swimming in an endless supply of plastic sauce pots and snack wrappers.

"Each meal... we got one big plastic container, one or two smaller circular containers, a bottle or a can of drink and condiments so things like serviettes, cutlery, condiments like ketchup or butter," he said.

Returnees in all the country's managed isolation hotels are asked to seal all their rubbish in a bag then leave it outside their room each day in shared, contactless bins.

A government managed isolation spokesperson said it was collected and disposed as 'general waste', while recycling isn't currently an option, in line with Ministry of Health criteria to reduce the risk of Covid-19 infection and "prioritise the safety" of returnees, staff and contractors.

It has also recently emerged that the virus responsible for Covid-19 can remain infectious on surfaces such as banknotes, phone screens and stainless steel for 28 days, according to researchers.

The findings from Australia's national science agency suggest SARS-Cov-2 can survive for far longer on surfaces than previously thought.

The virus is most commonly transmitted when people cough, sneeze or talk.

But experts say it can also be spread by particles in the air, as well as on surfaces such as metal and plastic.

However with an average of around 5,000 people in managed isolation each day that's roughly 100,000 meals' worth of waste dumped in landfills each week.

More than 60,000 people have passed through managed isolation and quarantine hotels since 26 March, which would add up to an estimated 2.5 million meals' worth of waste altogether.

Ross said that was "unacceptable" - and he was not the only returnee to feel that way. 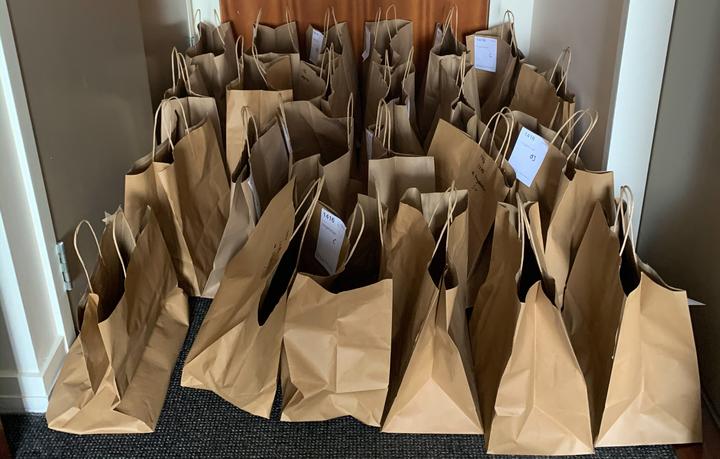 After two weeks in Auckland's Grand Millennium Hotel in August, Milli Steele surveyed 77 others about their New Zealand managed isolation experience, finding 80 percent thought the waste was higher than expected or "excessive".

She also asked people general questions like "what would improve your stay?"

"Seventy-seven percent of people said less waste would have improved their stay, and that was also by far the most selected option out of all of the options given," she said.

Ross wanted to see guests cleaning and sorting their rubbish into plastics, papers, glass, cans and food waste, so hotels can recycle it without extra handling.

Steele wanted hotels to provide guests with cutlery and glasses to wash in their rooms and re-use.

People she surveyed told her the current system is the opposite to what they do at home, "especially with a lot of the messaging at the moment that people are used to around recycling and reducing their waste," she said.

"It feels really confronting when you go into managed isolation and it's very, very excessive amounts of packaging."

He said there was little proof using disposable products was safer, with a mounting consensus in the scientific community that reusable products can be easily and safely sterilised - protecting people from Covid-19 and the environment from extra pollution.

The waste from managed isolation hotels joins thousands of tonnes of recyclable products already diverted to landfills by councils at alert levels 3 and 4.

Vine thought that proved something about the whole country's recycling system.

A managed isolation spokesperson said systems and processes were always being reviewed, to ensure hotels reduce waste where possible.

With no knowing how long managed isolation hotels will be operating, concerned guests hope a more sustainable system can be introduced soon.