The closure of a hydrotherapy pool and specialised gym has left some in Auckland's disabled community with nowhere to go. 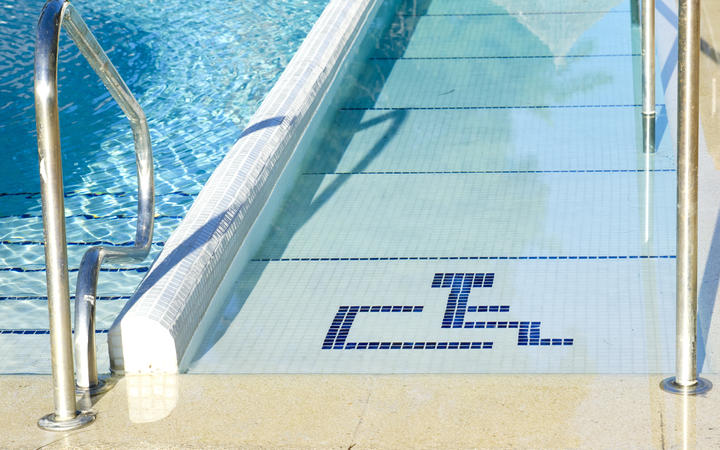 The Laura Fergusson Rehabilitation centre in Greenlane was always set to close in August, but has been shut since the first lockdown in March.

Disabled clients say they were promised a switch to suitable pools and gyms, but have received nothing more than a pro-forma letter listing standard facilities.

Robert Howard has a spinal condition which puts pressure on his nerves. He needs operations, and active recovery, to keep him moving.

Two years ago he spent three months living and recuperating at Laura Fergusson.

Initially confined to a wheelchair, he says the staff and facilities literally got him back on his feet.

"But unfortunately due to the fact that they've closed down and it's been very hard to find other facilities, I'm back to using two permanently."

Until its closure, her clients regularly used the Laura Fergusson gym and pool at Greenlane. It's central location meant it was easily accessible, with good parking and plenty of space.

She says it's the only purpose-built site in Auckland.

"The pool is purpose-built for people who have difficulties accessing the water. It is small, it is warm, it is supervised, it has appropriate floatation devices and it has a ramp for easy access," she said.

As of now, the only public hydrotherapy pool open to all of Auckland's 1.6 million people is at the West Wave Pool and Leisure Centre in Henderson.

AUT has a hydrotherapy pool on the North Shore, but it's currently closed because of Covid, and while physios and rehab specialists can hire it, it isn't open to the public.

Disability advocate Dr Huhana Hickey, who also uses a wheelchair, says from her base in South Auckland that's not an option.

"If I was to do that, that's a one hour drive each way and then you pay the (entry) price and then you're paying for the petrol there and back. It becomes unsustainable, we've got too bigger population. Plus you have to book it and it's really hard to get in and they're not cheap," she said.

Then there's the gym, which Julie Rope says has specific equipment much of which can't be found anywhere else.

"Upper limb equipment, mobility specific devices, parallel bars, raised plinths, it has space and it has the division as well and it's very well priced," she said.

Until its closure in March, Howard was using the pool three times a week and the gym twice a week.

He says when the closure was announced, the Laura Fergusson Trust assured people it would transition current clients.

Howard was stunned therefore to receive a letter in June providing a generic list of Auckland's pools, gyms and personal training services.

"They didn't actually help you decide anything, or anything like that, all they did was just give you the list and say, 'there you go, there's our transition programme'. It's not a transition, a transition is where you talk to the people you are going to and you discuss what the person's got or what's going on and everything like that. It's an informed decision between two parties," he said.

To her surprise, Julie Rope's Neuro Rehabilitation business made the list, even though she runs a clinic-based individual rehab centre where people learn exercises to do at home or at another gym.

She said they became aware of it when they were inundated with people turning up at their clinic doors. She said the people had been given a list and told to review the different gyms.

"They were really seeking something similar to Laura Fergusson and no one who came through our doors could tell me that that they'd found something equivalent ."

She said many of the gyms listed simply aren't suitable for someone in a wheelchair.

"The equipment is often spaced differently in a rehabilitation. In a privately run gym there's not often space for wheelchairs. Sometimes adjusting an actual machine requires assistance of somebody else and so there's not always somebody there to help you with that," she said.

And the public pools are even less use.

"Only two of those places I believe have actual functioning hoist transfer capacity. The changing rooms are often quite a distance from the hoist and they are not warm enough to exercise in a very slow exercise pace," she said.

"We treat people when they have an acute event, when their is an accident or an acute stroke or an acute presentation of their neurological condition, but these people require support progressively, they need ongoing input and access to therapy.

"It's just as important for somebody with a neuro muscular condition or a neurological condition to get their adequate cardiovascular health exercise in every day. So if they can't access a standard gym to do that cardio vascular exercise, then we need to give them a place where they can go safely to maybe work their arms, so they can get their heart rate up.

Rope says she has repeatedly approached the trust and staff to try and find a way of buying or leasing the site, which sits on five titles. She even suggested splitting off the piece with the pool and gym, but didn't get much of a response.

The trust has already sold off most of the gym equipment.

She said the closure is a disaster for Auckland's disability community.

RNZ wanted to know how much the Trust has made from the sale of equipment, what consideration had been given to keeping the pool and gym open to the public and what efforts had been made to help clients find new facilities.

The trust did not respond to questions.